World Cup 2014: USA in Step With Other Overachievers

On Tuesday, the Americans will confront Belgium in the Round of 16. In this World Cup of upsets and near-misses and exposure of aging dynasties, coach Jurgen Klinsmann might consider it a backhanded blessing that his players did not beat their brains out this past year in the Champions League, the made-for-TV, money-generating European club tournament. 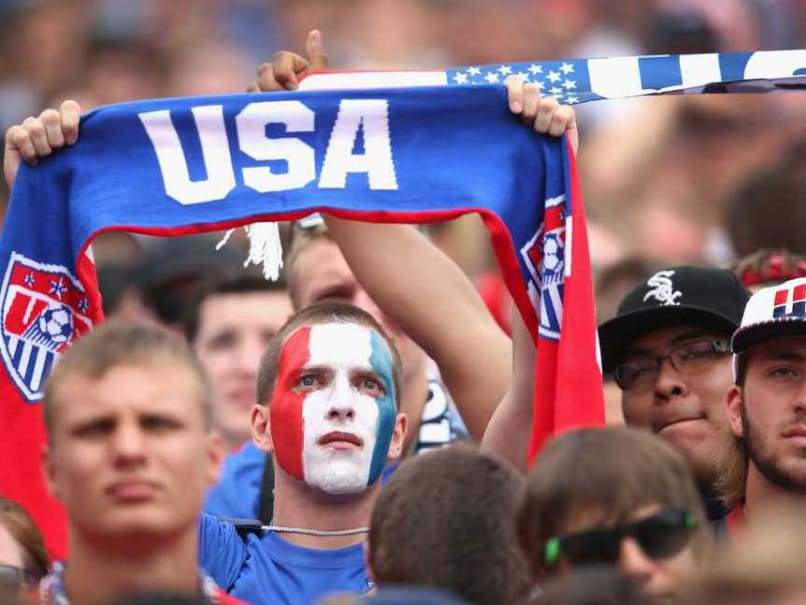 Fans watch USA play Germany in a World Cup soccer match on one of two large screens placed for fans in Grant Park on June 26, 2014 in Chicago, Illinois. Organizers expected as many as 20,000 people to watch the game in the park.© AFP

Jurgen Klinsmann often challenges U.S. players to follow the grand old goal of self-improvement by playing in the Champions League and the fast leagues of Europe. (Read: US has experience, albeit negative, against Belgium)

On Tuesday, the Americans will confront Belgium in the Round of 16. In this World Cup of upsets and near-misses and exposure of aging dynasties, Klinsmann might consider it a backhanded blessing that his players did not beat their brains out this past year in the Champions League, the made-for-TV, money-generating European club tournament. (Also read: US game seems made for Belgium's Hazard to shine)

Consider the side effects of life in the luxury lane: stress, cynicism and flat-out exhaustion. FIFA summer vacations are about as abbreviated as Speedos on a European beach.

As often happens in the first weeks of any World Cup, the most entertaining and charismatic teams have been the outsiders - Costa Rica, Greece, Colombia, Mexico, Algeria, Nigeria - all striving to exceed predicted limits. On Monday, Algeria threatened to pull off an unthinkable upset before finally losing to Germany in overtime, 2-1.

The United States, admirably playing in its seventh consecutive World Cup, is sort of an outsider, too, still ranked in the middle tier of qualifying squads. Does that account for the appealing desperation the U.S. players displayed during the group stage?

Consider Vincent Kompany, the stalwart captain of Belgium who plays deep into the springtime with Manchester City while also performing for Belgium when it calls him. Kompany is doubtful for Tuesday because of a groin strain, no doubt aggravated by all of his matches over the years.

U.S. fans saw Kompany in a do-it-for-the-bucks friendly in Cleveland in May 2013. Belgium, using most of its first-stringers, totally outplayed the Yanks in a 4-2 victory. But the triple duty takes its toll in dog years.

There is a familiar sight in World Cups: Overused athletes trudging off the bus, nursing sore quads, sore backs, sore minds. France bonked in 2002. England was outtahere early in 2006. Italy and France were jaded in 2010. And in this South American World Cup, Italy, England, Portugal and Spain are long gone.

Never more than a decade or three behind the learning curve, FIFA would do well to revamp its spurious World Cup seeding in which old champions presumably get credit for ancient titles.

Fresher teams have something to prove. The World Cup is always a series of five tournaments: group play, Round of 16, quarterfinals, semifinals and finals. The first part is almost always fun because of the new faces - Cameroon stunning defending champion Argentina in 1990, Senegal knocking off France in the 2002 opener. And let's not forget Turkey and the hustling Reds of South Korea in 2002, when both lost in the semifinals.

This year, Spain, after winning two European titles sandwiched around the breakthrough 2010 World Cup championship, was three-and-out, with Iker Casillas, once a teenage national player, stumbling around in the goal mouth like a weekend pub-league keeper.

On the first two days of the Round of 16: Chile with its neat Spain-like passes nearly upset Brazil, before losing in the shootout; Colombia showed energy and talent (who is this James Rodriguez and why don't we know more about him?) in sacking Uruguay, which displayed no heart after its serial biter, Luis Suarez, was sent home to the sour patriotic whine of victimhood.

On Sunday, Mexico led into the 88th minute before being beaten by the Netherlands, ultimately on a penalty kick awarded after a professional but extremely debatable flop by Arjen Robben that the referee went for. Then, two outsiders, Greece and Costa Rica, battled to see who would go further than it ever had.

Costa Rica survived on the spring left in the battered keeper, Keylor Navas, who by my count has played at least 37 official matches for Levante in Spain in the past season and at least 12 official matches and perhaps other friendlies for Costa Rica. Most players would love to reach the Champions League for the challenge, for the money. Klinsmann has been preaching that goal to prodigal sons like Clint Dempsey and Michael Bradley (and Klinsmann presumably made up his mind that Landon Donovan was soft because Donovan preferred California to Germany in the wintertime).

Has Bradley, the best U.S. player in South Africa four years ago, rusted up by casting his fate with Major League Soccer this season? Or is he hurt? He's too good a competitor to be this ineffective.

By the end, though, the World Cup is always about the usual suspects. I have been picking the Germans to win, and most of their guys play for Bayern Munich and other powers in the Bundesliga. Other likely candidates for the final are Brazil, Argentina and maybe France or Belgium or the Netherlands.

For the Americans, there is the opportunity to catch a powerhouse at the end of a long and brutal season. Klinsmann could exhort his players to take their motivation not from the Champions League but from the Costa Ricas and the Colombias and, for that matter, from Algeria, too. Why not us?

Comments
Topics mentioned in this article
FIFA World Cup 2014 Football United States Belgium
Get the latest updates on ICC Women's Cricket World Cup 2022 and IPL 2022, check out the Schedule , Live Score and IPL Points Table. Like us on Facebook or follow us on Twitter for more sports updates. You can also download the NDTV Cricket app for Android or iOS.