Ottmar Hitzfeld said an emotional goodbye to his Swiss team and football on Tuesday as he quit the sport after a dramatic World Cup loss to Argentina and following the death of his brother. 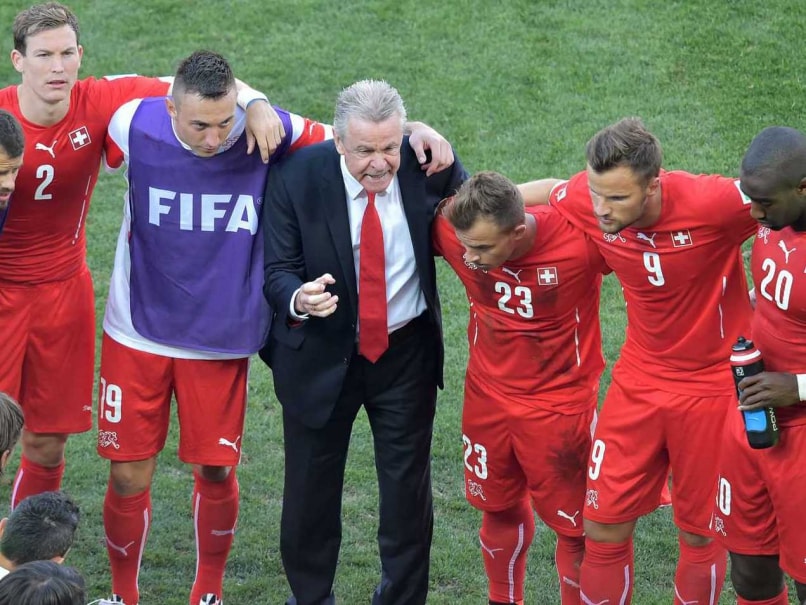 Ottmar Hitzfeld said an emotional goodbye to his Swiss team and football on Tuesday as he quit the sport after a dramatic World Cup loss to Argentina and following the death of his brother. (FIFA World Cup Vital Statistics | Fixtures)

Despite the personal trauma of losing his brother Winfried, 81, to leukaemia, Hitzfeld very nearly masterminded a seismic upset of Argentina in his last hurrah as coach. (Messi's Argentina send Switzerland packing)

He said the extra-time defeat reminded him of the 1999 Champions League final, when his Bayern Munich team were minutes from victory before Manchester United scored twice.

And Hitzfeld said his "heart was full of emotions" after the Swiss came just two minutes from a penalty shoot-out before Angel Di Maria's extra-time winner in Sao Paulo. "These are emotions you can only have with football, that's why I love football," he said.

"Switzerland has won a lot of hearts around the world today, that is something that will make us proud." The 65-year-old German, who won the Champions League with both Borussia Dortmund and Bayern Munich, had already announced he would retire after the World Cup.

"I will go on working for TV. I'll go to games but as a journalist basically, so I have a quiet life in front of me," he said.

"The job as a coach is difficult. I'm proud of my career. I was fortunate to coach marvellous clubs and also the Swiss national team. It has been a great time working for them so I say goodbye with a heart full of emotions."

After Argentina's winner, Hitzfeld went on the pitch to console his stricken players, just as he did in 1999 with his distraught Bayern Munich team following their 2-1 loss.

"It' s normal to go on the pitch at a time like that. I did it with Manchester United when we lost the Champions League final in a matter of two or three minutes, and then I did it today," he said.

"I went onto the pitch to console the players and tell them they've done a great job for themselves and their country." And he said his team could leave with their "heads held high" after running two-time winners Argentina close on the sport's biggest stage.

"I guess every moment in football will stick in your memory and emotions are the same but today, this was a huge dimension," he said.

"It's a World Cup and we were nearly at a penalty shoot-out. That of course creates a lot of tension. Unfortunately we didn't make it but I think we can walk tall and leave with our heads held high."

Comments
Topics mentioned in this article
FIFA World Cup 2014 Switzerland Football
Get the latest updates on ICC Women's Cricket World Cup 2022 and IPL 2022, check out the Schedule , Live Score and IPL Points Table. Like us on Facebook or follow us on Twitter for more sports updates. You can also download the NDTV Cricket app for Android or iOS.