Former Bayern Munich boss Ottmar Hitzfeld said he would demonstrate how to neutralise Argentine genius Lionel Messi, who has plundered four goals in three games so far in Brazil. 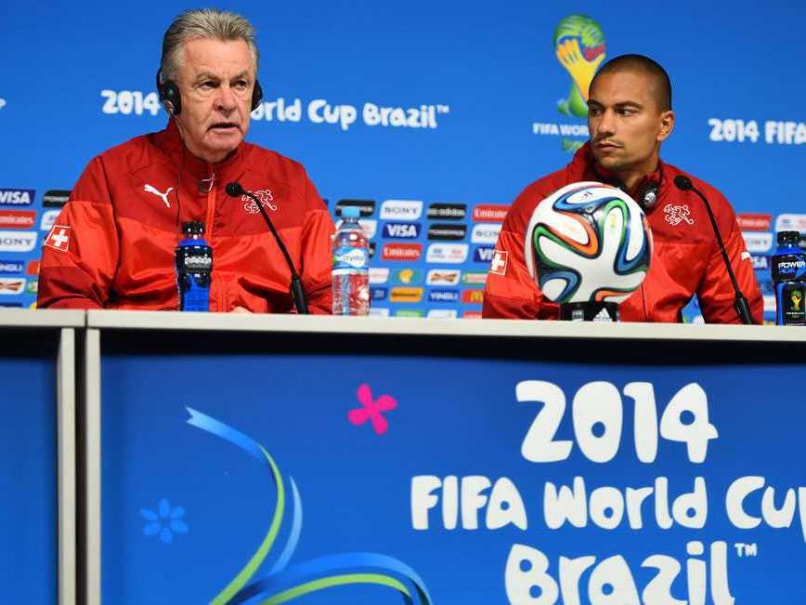 Switzerland's German coach Ottmar Hitzfeld (L) and midfielder Gokhan Inler give a press conference at The Corinthians Arena Stadium in Sao Paulo on June 30, 2014, on the eve of the 2014 FIFA World Cup round of 16 football match Switzerland vs Argentina.© AFP
Sao Paulo:

The former Bayern Munich boss said he would demonstrate how to neutralise the Argentine genius, who has plundered four goals in three games so far in Brazil, in the last 16. (Also read: Argentina suffer big blow ahead of Last 16 clash vs Switzerland)

And the German, who has promised to quit football after the World Cup, added that he was not approaching Tuesday's showdown with the thought that it may be his last game.

"How to stop Messi? We'll show you tomorrow how we do it," Hitzfeld told reporters at Corinthians Arena in Sao Paulo.

"Of course I've thought with the staff how to go on and continue to the quarterfinals -- so I don't think it's going to be my last match," he added.

The comments indicate Hitzfeld, one of only five coaches to win the Champions League with two different teams, is preparing a tactical masterclass to shackle the four-time world player of the year.

The 65-year-old pulled off one of the great shocks of the 2010 World Cup when Switzerland beat eventual champions Spain 1-0 in the group stage, en route to an early exit.

Switzerland, thanks to a hat-trick from "Messi of the Alps" Xherdan Shaqiri, recovered from a 5-2 beating by France to swamp Honduras 3-0 and reach the last 16.

"I think any defence will face problems when facing Messi. But problems are there to be solved," Hitzfeld said.

He added: "I've had many challenges in my career. At the World Cup in South Africa, despite having four points we didn't make it into the second round so we have fulfilled this little dream, making it into the last 16.

"We just want to go on fulfilling the dreams we have. For me personally it's definitely a highlight in my career as a coach."

Hitzfeld said Switzerland were entirely different from the team that lost 3-1 to Argentina in a friendly in 2012, when Messi scored his first international hat-trick.

"Switzerland have become stronger over the last two years," he said. "We play a different style, a different technical formation and we will try to use different means to cope with Argentina."

Captain Gokhan Inler said the contribution of the fast, stocky Shaqiri, who has been shifted from the wing to up front, would be key.

"He needs a good team backing him up, he needs good technicians to keep him in the game and give him liberty. The midfield will feed him.

"He does a good job playing up front and the good thing for us is that he won't be figured out that easily."