While he conceded that he would have loved to see a Brazil-Argentina showdown for the coveted FIFA World Cup, former Indian cricket team skipper Sourav Ganguly picked Germany and Netherlands based on current form. 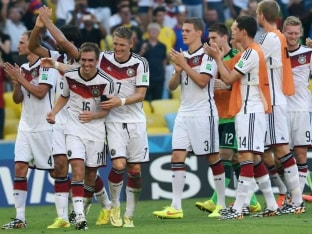 Former India skipper Sourav Ganguly, who is set to fly off to England for commentary assignments, will miss celebrating his birthday with family at home when he turns 42 tomorrow but Bengal's favourite son promises to be updated with all the football action.

"That's the way it is, can't help," Ganguly said before leaving for Delhi to catch a late night flight to London.

Commenting on the final phase of the FIFA World Cup, Ganguly predicted a Germany-Netherlands final in the summit clash on July 13.

"Obviously as a football fan I would love to see a Brazil-Argentina final, but going by the form it looks to be Germany versus the Netherlands," said the Prince of Kolkata.

On the cricketing front, India begin their gruelling two-month tour of England with the first of the five Tests starting at Trent Bridge on July 9 as the Mahendra Singh Dhoni's men would be desperate to reclaim the lost glory after being swept aside 0-4 in the 2011 series.

Ganguly, however, said India could fancy their chances as it would not be the same English side after their 0-1 loss to Sri Lanka in the just-concluded series

"India have the ingredients to beat this England side. It's not the same side that beat us in 2011. If the boys live up to their potential and put up some fight then they can turn it around," Ganguly said.

Comments
Topics mentioned in this article
FIFA World Cup 2014 Germany Netherlands Sourav Ganguly Football
Get the latest updates on ICC Women's Cricket World Cup 2022 and IPL 2022, check out the Schedule , Live Score and IPL Points Table. Like us on Facebook or follow us on Twitter for more sports updates. You can also download the NDTV Cricket app for Android or iOS.