Saturday's match vs Netherlands will be the end of a campaign that turned to disaster for the World Cup hosts. Neymar suffered a fractured vertebrae in the quarter-final against Colombia and will spend several more weeks on the sidelines. 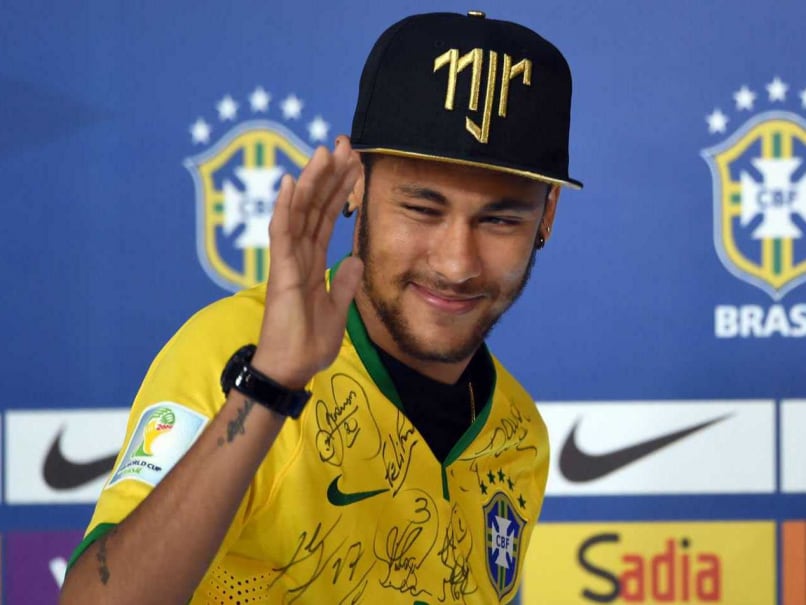 Neymar gestures during a press conference ahead of Brazil's third-place playoff vs Netherlands© AFP
Brasilia:

Brazil striker Neymar returns to World Cup duty on Saturday when he goes to watch his humiliated teammates take on the Netherlands for third place in the tournament. (FIFA World Cup 2014 Tracker)

The Brazilians and Dutch will be the uncomfortable warm-up act for Sunday's grand finale between Germany and Argentina at Rio de Janeiro's historic Maracana Stadium. (Scolari not to blame for shocking loss to Germany: Thiago Silva)

Saturday's match will be the end of a campaign that turned to disaster for the World Cup hosts. Neymar suffered a fractured vertebrae in the quarter-final against Colombia and will spend several more weeks on the sidelines. (Nothing will be the same again: Scolari)

Brazil, lost without Neymar and their suspended captain Thiago Silva, went on to collapse to a historic 7-1 defeat to Germany in the semi-final.  (Messi, Neymar, Muller for FIFA Golden Ball)

"We will have difficult days for the rest of our lives" because of the result, said Brazil coach Luiz Felipe Scolari.

He said Brazil's backroom team have since concentrated on a "psychological recuperation" of the players to get them ready to face the Dutch at the Garincha National Stadium in Brasilia at 2000 GMT.

Thiago Silva is expected to return to play, while Neymar will be in the stadium for the first time since getting a knee in the back that he at first feared would leave him "in a wheelchair" for life.

The Netherlands, meanwhile, are still drained by their penalty shoot-out defeat to Argentina and Dutch tactician Louis van Gaal will have his mind on moving to Manchester United for the new season.

Van Gaal at first said the third-place match should "never be played", but he changed his version on Friday to say: "We are going to do everything to finish third.

"We want to leave the World Cup unbeaten, something a Dutch side has never achieved."

Midfielder Leroy Fer, hurt in the group stage, is the only injury absentee for the Dutch, with the rest of the squad fit.

"I'll use the players I think are mentally the strongest. The mind is stronger than the body," van Gaal said.

Brazilian authorities are preparing their biggest ever security operation for Sunday's final with nearly 25,800 police, soldiers and private security guards on duty in the city and at the Maracana stadium.

Russia's President Vladimir Putin, whose country will host the 2018 World Cup finals, will join Brazil's President Dilma Rousseff at the Germany-Argentina match. About 100,000 Argentine fans are expected to invade the city, even though most do not have tickets.

"We have from today the biggest security operation that the city, the country, has ever seen," said Rio state security secretary Jose Mariano Beltrame.

In a bid to avoid violence, bars around the Maracana stadium will be ordered to stop selling alcohol two hours before Sunday's match. Police blockades around the stadium will go up Saturday night.

Germany will go into Sunday's match as favourites after their 7-1 triumph against Brazil. But Argentine captain Lionel Messi, four time world player of the year, will be looking for his first World Cup title.

The teams have already played each other in two World Cup finals. Argentina, with Diego Maradona, beat West Germany 3-2 in 1986 in Mexico. West Germany took revenge with a 1-0 victory in the 1990 final in Italy.

A European country has never won the World Cup tournament held in the Americas.

FIFA asked Germany not to train at the Maracana stadium on Saturday to protect the pitch after heavy rain. The Germans played there when they beat France 1-0 in the quarter finals.

Neymar, Messi and Germany's top striker Thomas Mueller all feature on the shortlist for the World Cup's best player which will be announced after the final.

Comments
Topics mentioned in this article
FIFA World Cup 2014 Brazil Netherlands Football
Get the latest updates on ICC Women's Cricket World Cup 2022 and IPL 2022, check out the Schedule , Live Score and IPL Points Table. Like us on Facebook or follow us on Twitter for more sports updates. You can also download the NDTV Cricket app for Android or iOS.