To the astonishment of all and sundry, except his coaching staff and replacement goalkeeper Tim Krul, Louis van Gaal sent the latter on for number one Jasper Cillessen and it proved to be an inspired call in the penalty shootout against Costa Rica in the quarterfinal of the FIFA World Cup. 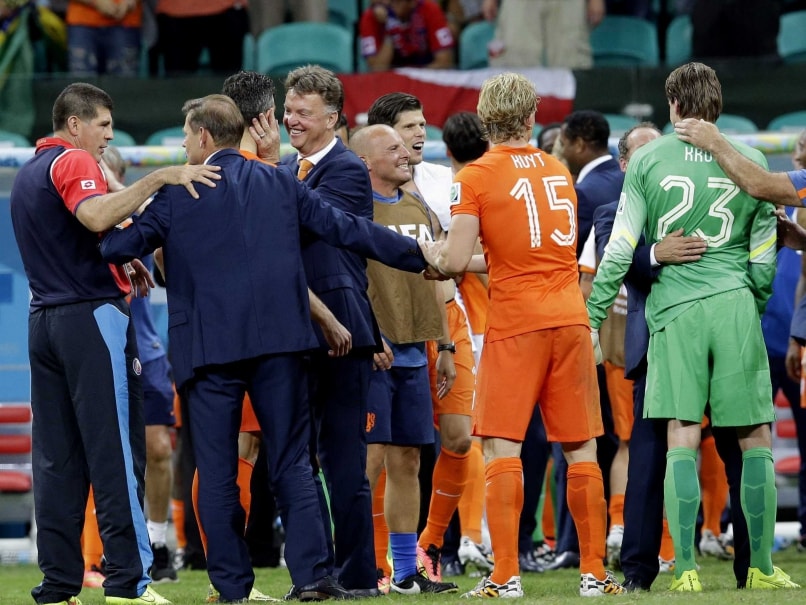 Louis van Gaal congratulates his players after their win over Costa Rica.© AP
The Hague:

Louis van Gaal's unprecedented decision to replace his goalkeeper for the penalty shoot-out in the Netherlands' World Cup quarterfinal victory over Costa Rica was hailed as a masterstroke by the Dutch media on Sunday. (Van Gaal Kept Keeper in Dark Over Switch)

To the astonishment of all and sundry, except his coaching staff and replacement goalkeeper Tim Krul, van Gaal sent the latter on for number one Jasper Cillessen and it proved to be an inspired call.

But it was a brave gamble, given that Krul had saved just two of the 20 penalties he had faced at his club Newcastle United.

The positive headlines represent quite a change for van Gaal, who made his name in the 1990s as coach of a vibrant young Ajax side who won the 1995 Champions League.

He had departed after his first unsuccessful spell in charge of the national side, when they failed to qualify for the 2002 finals, to scathing criticism.

None of the Dutch media were able to match the play on words by former Dutch internationals Frank and his twin brother Ronald de Boer, who tweeted 'Louis van G(eni)aal.'

However, they still delivered unstinting praise. "In sport, at the highest level, success can be decided by the thinnest of margins. Sometimes it stems from luck, sometimes from a sixth sense," commented De Telegraaf. (Tim Krul in Dreamland After Shoot-Out Switch)

Another Dutch daily, Volkskrant, also poured superlatives over the 62-year-old coach, who is due to step down and take over the reins at English Premier League giants Manchester United.

"The change was a masterstroke. Tim Krul saved two penalties," it purred.

Dutch TV station NOS also chimed in with admiring comments. "Contrary to all expectations, Louis van Gaal replaced Cillessen by Tim Krul for the penalties. Tim Krul turned out to be the hero by saving two penalties."

Although another daily, Algemeen Dagblad, said the match had been a thriller -- it finished 0-0 after extra-time though Wesley Sneijder hit the woodwork twice -- the Dutch national broadcaster preferred to look ahead to the semifinal clash with two-time champions Argentina on Wednesday.

"It will be the fifth time that the Netherlands will contest the semifinals (they won three of them but lost on every occasion in the final)," said the broadcaster.

Comments
Topics mentioned in this article
Netherlands FIFA World Cup 2014 Tim Krul Football
Get the latest updates on ICC T20 Worldcup 2022 and CWG 2022 check out the Schedule, Live Score and Medals Tally. Like us on Facebook or follow us on Twitter for more sports updates. You can also download the NDTV Cricket app for Android or iOS.