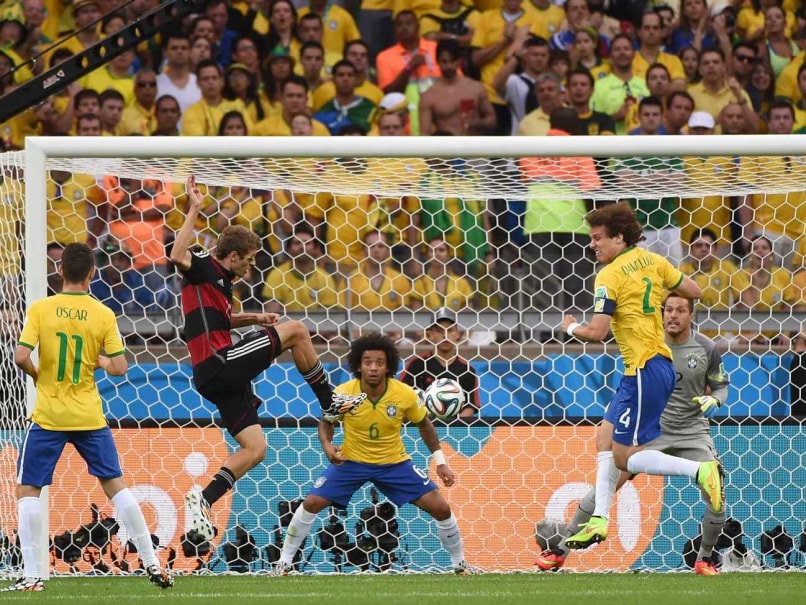 Brazil's World Cup dream was smashed into oblivion as majestic Germany ran riot to win an extraordinary semi-final 7-1 and send the South American hosts crashing to their worst ever defeat in their 100-year footballing history.

Sixty-four years after Brazil was plunged into national mourning after their loss in the 1950 final, the hosts were torn apart in a defeat likely to be every bit as traumatic as the fabled "Maracanazo."

Germany advanced to Sunday's final in the Maracana after a brilliant first-half blitz which included a burst of four goals in six devastating minutes.

Thomas Mueller opened the scoring on 11 minutes, punishing poor Brazilian marking at a corner to make it 1-0. (Brazil vs Germany: Match Highlights)

Brazil, badly missing suspended captain Thiago Silva, tried to regroup but there was no respite.

Miroslav Klose's cool finish on 23 minutes -- which made him the World Cup's all-time top-scorer with 16 goals -- was the cue for the floodgates to open.

Toni Kroos struck twice in the 24th and 26th minutes to make it 4-0 and then Sami Khedira rounded off another clinical move to make it 5-0 on 29 minutes. (Brazil vs Germany: Match in pics)

Dead and buried inside half an hour, the crowd at the Mineirao Stadium was stunned into silence.

Many fans burst into tears as they struggled to comprehend the enormity of what had taken place.

After the fifth goal, well before half-time, hundreds of people left their expensive seats.

A section of the crowd chanted sexually-expletive obscenities against the team and President Dilma Rousseff, who up to now had enjoyed a reprieve from protests over the record $11 billion spent to host the tournament.

Across the nation, others fans shouted at their televisions and abandoned public screenings.

Though Brazil rallied at the start of the second half, the torture continued on 69 minutes when Andre Schuerrle swept in Germany's sixth.

This time boos rang out around the Mineirao as the Germans celebrated.

Schuerrle then grabbed his second on 79 minutes to make it 7-0, and confirm the worst defeat in Brazil's history.

The previous record loss had been a 6-0 reverse to Uruguay in 1920.

Schuerlle's second goal was greeted by a burst of applause as Brazilian fans saluted Germany's wonderful exhibition of attacking football.

A late goal from Oscar was barely applauded by the Mineirao Stadium crowd.

Brazil had gone into the match riding a fervent wave of national emotion, determined to clinch a place in the final to honour injurect striker Neymar.

The crowd roared chants of "Neymar, Neymar" just before kick-off, following a spine-tingling rendition of the national anthem that saw captain David Luiz proudly holding up the injured striker's No.9 shirt.

But Mueller's early strike punctured the fervent mood, and when the goals started flying in after Klose made it 2-0 there was no way back for Brazil.

Germany will now play the winner of Wednesday's semi-final between the Netherlands and Argentina in the final.

Comments
Topics mentioned in this article
Miroslav Klose Toni Kroos Andre Schurrle Thomas Muller Football FIFA World Cup 2014 Germany Brazil
Get the latest updates on ICC Women's Cricket World Cup 2022 and IPL 2022, check out the Schedule , Live Score and IPL Points Table. Like us on Facebook or follow us on Twitter for more sports updates. You can also download the NDTV Cricket app for Android or iOS.