Germany are attempting to become the first side from Europe to win a World Cup in the Americas, determined that a golden generation will finally gets it reward after a string of near-misses. 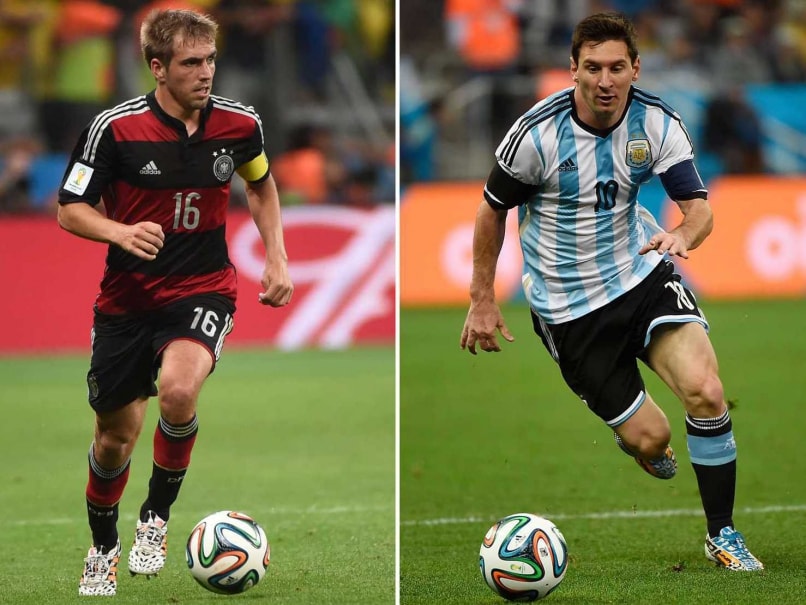 A Germany side chasing a place in history will attempt to wreck Lionel Messi's dream of a World Cup coronation with Argentina on Sunday as the month-long football carnival hits a climax at the Maracana Stadium. (Will Lionel Messi Triumph Against United Germany?)

The 64th game of one of the best World Cups of all time pits Europe against South America -- a duel between two football superpowers in one of the sport's most evocative arenas.

Germany are attempting to become the first side from Europe to win a World Cup in the Americas, determined that a golden generation will finally gets it reward after a string of near-misses. (Read: Vatican Calls for Global Ceasefire During World Cup Final)

Messi, meanwhile, is seeking the triumph which will silence forever the remaining critics who argue that the absence of a World Cup title precludes him from a place alongside Diego Maradona in football's pantheon.

The momentum is firmly with Germany after their astonishing 7-1 semifinal demolition job of Brazil, through a combination of superb attacking play and defensive incompetence.

Ominously for Argentina, Germany say they quickly put the win firmly in the rear-view mirror. (Also read: We are Ready to Make History, Says Joachim Loew)

All German eyes are now on the historic Maracana and a chance to claim the ultimate prize after losing in either the final or the semifinals in their last four major tournaments.

"We enjoyed the game against Brazil, but we ticked it off after 24 hours," said Germany striker Miroslav Klose.

That same steely determination has characterised Germany's road to Rio, notably in coming from behind to snatch a 2-2 draw with Ghana in Group G and outlasting an awkward Algerian challenge in the last 16.

They coolly neutralised a dangerous-looking France 1-0 in the quarterfinals and swiftly turned their attention to dismembering Brazil. (Related: Argentina Prays for Lionel Messi Goals)

"As a player or a manager I have never seen a team celebrate a big victory so quietly," German team manager Oliver Bierhoff said after the France win.

From top to bottom, the German spine has exuded quality. Manuel Neuer has looked unbeatable in goal while Mats Hummels has been a silky and solid presence in defence. Bastian Schweinsteiger and Sami Khedira have proved a formidable midfield duo, allowing the likes of Toni Kroos and Mesut Ozil to flourish.

Thomas Mueller has been a deadly goalscoring threat -- five goals so far in the tournament -- while the 36-year-old Klose has chipped in with two goals, becoming the World Cup's all-time leading scorer in the process.

Germany's 17 goals in the tournament -- more than double Argentina's total -- have come from eight different players, a testament to the team ethic which pervades Joachim Loew's squad. (Argentine Coach to Step Down After Final, Says Agent)

"Brazil have Neymar, Portugal have Ronaldo, Argentina have Messi and Germany have a team," ran one widely retweeted summary on Twitter this week.

Ranged against Germany's attacking arsenal are an Argentina side led by 27-year-old Barcelona superstar Messi.

The four-time world footballer of the year came into the tournament determined to atone for two disappointing World Cups in 2006 and 2010. (Read: Five reasons Why Lionel Messi Stands Out)

Like Maradona 28 years ago, he has dragged his team over the line at key moments in Brazil. He opened with an individual goal against Bosnia, an injury-time winner to beat Iran, and two more goals against Nigeria.

Messi's run and pass created the extra-time winner for Angel Di Maria against Switzerland in the last 16.

While he was largely anonymous in the semifinal win over the Dutch, Germany will know that one slip on Sunday could present Messi with a match-winning moment, just as it did for Maradona in the 1986 final against the Germans.

Man-marked out of the match by Lothar Matthaus, Maradona still created the game's winning goal -- a sublime first-time through ball which released Jorge Burruchaga to clinch a 3-2 victory.

"Regardless of whether he scores goals or not, his influence is decisive," Argentina coach Alejandro Sabella said of Messi after the quarterfinals.

"A game has many aspects, apart from goals. When you have a player such as Messi, who never, or almost never, loses the ball, it's water in the desert -- and not just when he scores." (Italy's Nicola Rizzoli to be Referee in FIFA World Cup Final)

Yet for all the parallels with 1986, the last World Cup meeting between the two nations may be more relevant -- Germany's 4-0 romp in the 2010 quarterfinals.

Seventeen players involved in that Cape Town match featured in this week's semifinals, 10 for Germany and seven for Argentina.

But many observers have wondered whether Messi's dip in form last season was due to a pre-occupation with the World Cup.

It could be that the diminutive genius has been plotting all along to claim the crown on Sunday at the Maracana.

"If he is saving his best performance for the final," said former England manager Glenn Hoddle, "it will be a joy to watch." (Read: Latin America Reluctantly Rally Behind Argentina)

Comments
Topics mentioned in this article
Germany Argentina Lionel Messi Miroslav Klose FIFA World Cup 2014 Football
Get the latest updates on ICC Women's Cricket World Cup 2022 and IPL 2022, check out the Schedule , Live Score and IPL Points Table. Like us on Facebook or follow us on Twitter for more sports updates. You can also download the NDTV Cricket app for Android or iOS.