The Dutch, who have never won the World Cup but reached three finals, including the last one in Johannesburg four years ago, play Argentina in Sao Paulo on Wednesday in one of two classic match-ups between South American and European powerhouses. 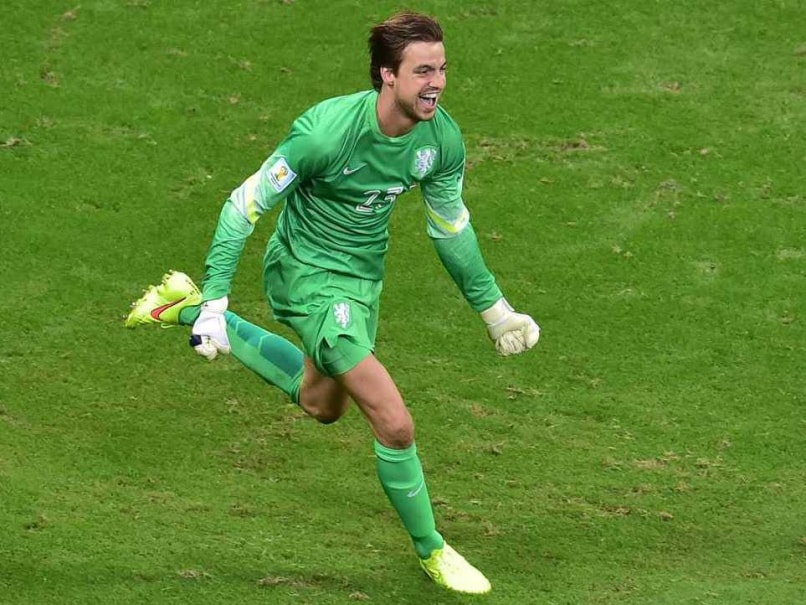 The Netherlands survived a nerve-wracking penalty shootout against Costa Rica on Saturday, with substitute goalkeeper Tim Krul the unlikely hero, to set up a World Cup semi-final against Argentina after the South Americans beat Belgium 1-0. (Louis Van Gaal and his bag of tricks)

While the Netherlands and Argentina savoured their progress to the last four, hosts Brazil were still coming to terms with the news that star forward Neymar will miss the rest of the tournament due to a broken vertebra in his back. (Van Gaal hailed by press for 'masterstroke')

The news prompted bookmakers to install Brazil's semi-final opponents Germany as the new favourites to win the title. In Salvador, Krul was brought on specifically for the shootout at the Fonte Nova Arena after the teams finished extra time locked at 0-0. (Tim Krul in dreamland after shootout heroics)

Diving full length to his left, Krul saved from Bryan Ruiz and Michael Umana as the Netherlandstriumphed 4-3 to end the fairytale run of tiny Costa Rica, who had defied the odds just to make the quarter-finals for the first time. (A late entry helps Dutch avert exit)

"What we did on the pitch, what we showed to the world, I think that is crucial," said Costa Ricacoach Jorge Luis Pinto. "We are not a big power but we demonstrated things, we are leaving very proud."

The Dutch, who have never won the World Cup but reached three finals, including the last one in Johannesburg four years ago, play Argentina in Sao Paulo on Wednesday in one of two classic match-ups between South American and European powerhouses.

Germany will tackle Brazil in Belo Horizonte a day earlier.

Argentina reached the semi-finals for the first time in 24 years thanks to a brilliant eighth-minute goal by striker Gonzalo Higuain at the Brasilia national stadium.

Higuain's instinctive turn and shot flew into the Belgian net after the ball reached him via a deflection off defender Jan Vertonghen in what proved to be the only goal of a match dominated by watertight defence.

"We gave our all, it's a World Cup, it doesn't happen every day," Higuain said. "Now we have to think about the next game. There are two matches left to achieve this beautiful dream."

Higuain grazed the crossbar with another powerful strike in the second half while Lionel Messi, who teased and tormented the Belgians with his wizardry, blasted the ball straight at Belgiumgoalkeeper Thibaut Courtois when he broke free in stoppage time.

Argentina, World Cup champions in 1978 and 1986, spent much of the game defending as a frustrated Belgium struggled to cut out clear chances though Kevin Mirallas and Marouane Fellaini both went close with headers.

"We were not impressed by the Argentines, absolutely not, it's just an ordinary team," Belgiumcoach Marc Wilmots growled. "Messi is the star player, he never loses the ball but he made a couple of tackles and fouls, the referee is never against him, every time there was a little foul it was almost always in favour ofArgentina."

The heavily-fancied Netherlands dominated their game with Costa Rica but could not find a way to get the ball in the net, squandering a series of chances and being denied by some acrobatic saves from Keylor Navas.

The Dutch hit the woodwork twice in normal time and once more in extra time before the game was sent to a shootout, raising Costa Rican hopes of a victory.

The Central Americans had won their last 16 match with Greece on penalties, scoring five from five, while the Netherlands had lost four of the five shootouts they had contested in major competitions.

Dutch coach Louis van Gaal made the surprising decision to send on the towering Krul for regular keeper Jasper Cillessen and the unorthodox move proved a masterstroke.

"The sub was terrific," gushed Dutch striker Robin van Persie. "If you see something like that, it deserves credit. We know Tim Krul is great at stopping penalties."

While the Dutch celebrated, the carnival atmosphere that swept over Brazil on Friday following their 2-1 win over Colombia was replaced by a more sombre mood as the samba nation tried to come to terms with Neymar's exit from a tournament that has exceeded everyone's expectations.

Brazilian television stations interrupted their normal programming to broadcast live shots ofNeymar leaving the team's training base on a helicopter while Brazil President Dilma Rousseffsent the injured player a letter.

"It broke my heart and the heart of every Brazilian watching the pain on your face on the Castelao field yesterday," Rousseff wrote.

"But we also saw the immense strength of a great warrior, who will never let himself be held back even when wounded."

The initial shock over Neymar's injury quickly turned to fury as the collision with Colombian defender Juan Zuniga was further scrutinised.

Neymar collapsed on the pitch and was carried off the field in tears after Zuniga had come rushing in from behind and kneed the charismatic Brazilian striker in the back.

Zuniga, who was not cautioned over the incident, sent a personal note to Neymar explaining that it was an accident but not everyone agreed with his version of events.

"We all have to fight for football to have more fair play. We have to demand that sanctions be given to violent players. I am in favour of very severe sanctions to those who don't want to play football and just want to do such violent tackles.

"It was an evil tackle," he added.

Comments
Topics mentioned in this article
FIFA World Cup 2014 Tim Krul Football
Get the latest updates on ICC T20 Worldcup 2022 and CWG 2022 check out the Schedule, Live Score and Medals Tally. Like us on Facebook or follow us on Twitter for more sports updates. You can also download the NDTV Cricket app for Android or iOS.