Brazil slumped to a 3-0 defeat against the Netherlands in the third-place play-off match. The defeat marks the first time since 1974 that Brazil have lost consecutive World Cup matches. 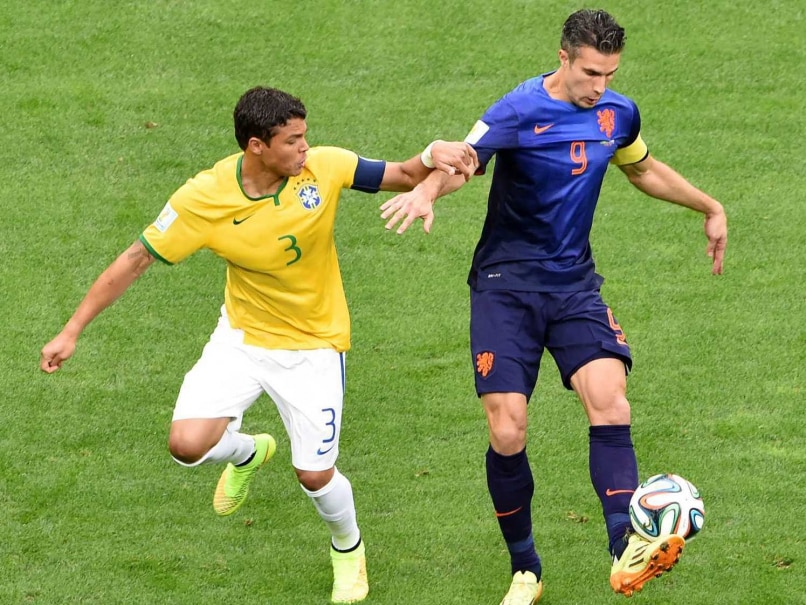 Brazil's traumatic World Cup ended with more pain on Saturday as they lost 3-0 to a superior Netherlands side in the third-place play-off at the Mane Garrincha National Stadium in Brasilia. (Blog | Matchcentre)

Still struggling to digest their record-breaking 7-1 loss to Germany in the semi-finals, Brazil had a similarly disastrous start against the Dutch, with Robin van Persie opening the scoring from the penalty spot inside three minutes. (Match in pics)

With injured star Neymar watching on from the bench, Daley Blind then capitalised on more calamitous defending to make it 2-0 with 17 minutes played, and Georginio Wijnaldum rubbed salt into the hosts' wounds by adding a third in injury time.

Brazil have now lost back-to-back home games for the first time since 1940, and they end the tournament having conceded 14 goals altogether, the most of any side at a World Cup since 1986 and the most ever for a host team.

In contrast, Louis van Gaal's Netherlands leave with the consolation of taking third place and end the competition unbeaten, with their semi-final exit against Argentina only coming after a penalty shoot-out.

The day had not started well for Holland, who saw playmaker Wesley Sneijder withdraw at the last minute due to an injury suffered in the warm-up, with Jonathan de Guzman replacing him in the starting line-up.

Brazil coach Luiz Felipe Scolari had made six changes to his team following the Germany debacle, with one seeing captain Thiago Silva make his return after suspension.

The absence of Silva, along with that of Neymar, was a contributing factor in the semi-final humiliation, but the usually inspirational centre-back was at fault as Brazil conceded a penalty with less than two minutes played.

Silva was caught the wrong side of Arjen Robben as the winger latched onto a pass from Holland captain van Persie and was left with a clear path on goal.

Robben was pulled back by the defender, with the contact starting outside the box and carrying on into the area. Algerian referee Djamel Haimoudi decided to award a spot-kick but controversially opted against showing Silva a straight red card.

If Silva was let off the hook, van Persie made no mistake from the spot, lashing his kick high into the top right-hand corner to give goalkeeper Julio Cesar no chance.

Once again Brazil's defensive frailties were hopelessly exposed when the Netherlands' second goal arrived in the 17th minute.

De Guzman broke in behind Maxwell in the Brazilian left-back position and got to the byeline, from where his cross was headed back out by David Luiz and straight into the path of Blind, who had time to take the ball down 12 yards out and volley home.

Fortunately for a fragile Brazilian side, Holland were not quite as relentless in their attacking as the Germans had been in Belo Horizonte, but the hosts never appeared capable of breaking down the opposition defence.

While Jo, starting in attack instead of the much-maligned Fred, toiled against van Gaal's well-drilled three-man central defence, Jasper Cillessen saved comfortably from Oscar, the most enterprising Brazilian on the field.

At the other end, Julio Cesar got down well to keep out a van Persie volley, but Brazil still needed to become the first side to recover from a two-goal half-time deficit and win a World Cup match.

They had little sympathy from the referee as they chased the game, however.

When Oscar went down in the box following a Blind challenge midway through the second period, the official booked the little midfielder for diving rather than point to the spot, summing up a desperate end to the tournament for the hosts.

Blind injured himself making the challenge, and his replacement Daryl Janmaat was the provider for the third goal, his low ball from the right being swept home by Wijnaldum.

Comments
Topics mentioned in this article
Robin Van Persie Football FIFA World Cup 2014 Netherlands Brazil
Get the latest updates on ICC Women's Cricket World Cup 2022 and IPL 2022, check out the Schedule , Live Score and IPL Points Table. Like us on Facebook or follow us on Twitter for more sports updates. You can also download the NDTV Cricket app for Android or iOS.