The FIFA World Cup 2014 in Brazil has seen the highs and lows of football over a period of one month.

The continent's four teams failed to grab a win in Brazil, the first time Asia has gone without a victory at a World Cup since 1990 when United Arab Emirates and South Korea each lost all three group games. Australia, Korea, Japan and Iran managed only three draws between them and all finished bottom of their respective groups.

Uruguay forward Luis Suarez was slapped with a World Cup record four month ban from football and suspended for nine international matches after sinking his teeth into the shoulder of Italy's Giorgio Chiellini. Suarez initially denied the bite, before backtracking and apologising after FIFA's punishment.

The fallout made it one of the most talked about incidents in Brazil, with everyone from pundits to presidents offering their opinion. (Suarez Banned) 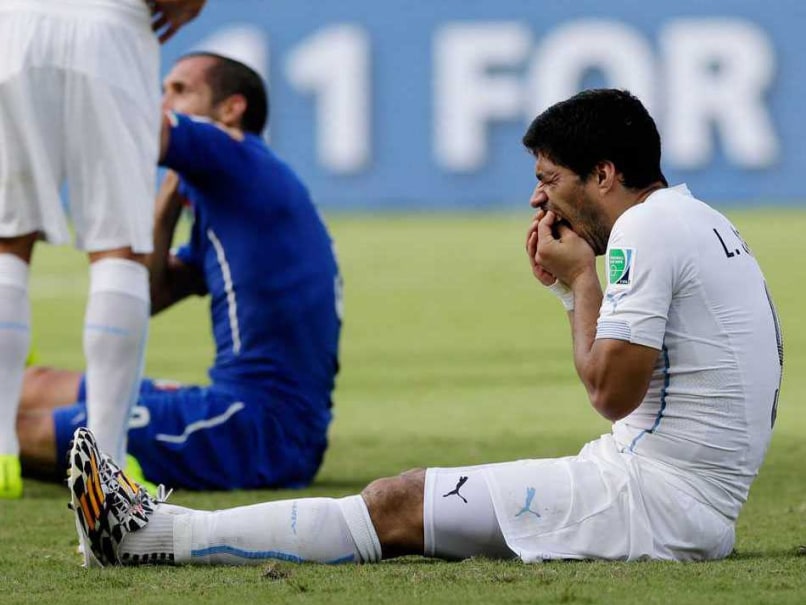 Ghana's players wanted their appearance fees for playing in the World Cup right away so President John Mahama flew millions of dollars to Brasilia in order to appease the squad hours before their make-or-break clash with Portugal. Pictured kissing the stacks of cash upon its arrival, Ghana's players lost to the Portuguese and exited at the group stage.

The on-field action in Brazil was amongst the best ever but the problems surrounding the organisation of the tournament were not forgotten. Brazil President Dilma Rousseff, along with FIFA boss Sepp Blatter, were routinely booed when shown in the crowd at matches, with many Brazilians angered by their government's extravagant World Cup spending of more than $11 billion at a time when the country's economy is sagging and public services are in dire need of investment.

A World Cup record defeat, a first loss in a competitive home match in 39 years, it was not meant to end like this for pre-tournament favourites Brazil. The 7-1 semi-final mauling suffered in Belo Horizonte at the hands of Germany plunged a nation into mourning and quickly led to calls for an overhaul of the domestic game. 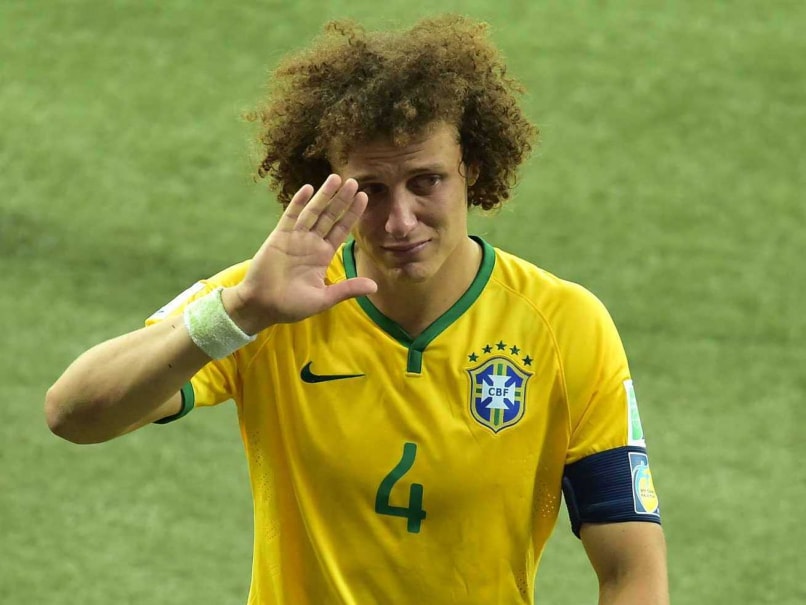 David Luiz after losing the semi vs Germany in the FIFA World Cup.

The empty stadiums of the South African World Cup four years ago were never going to be repeated with fans flocking from all over the world to watch the action in Brazil.

The majority seemed to come from Argentina, Chile and Colombia. Brazilians also turned out en masse to grab a glimpse of any of the 32 competitors making the 2014 tournament the second most popular in history based on average attendances.

The group stages were full of them. The knockout stages less so but still the attacking mindset of the 32 teams resulted in 167 goals prior to the final two matches. Four short of the record 171 scored in France in 1998.

United States goalkeeper Tim Howard made a World Cup record 16 saves in their last-16 clash with Belgium. It was not enough, though, as Belgium prevailed 2-1 in extra time. (Howard is USA's Superhero) 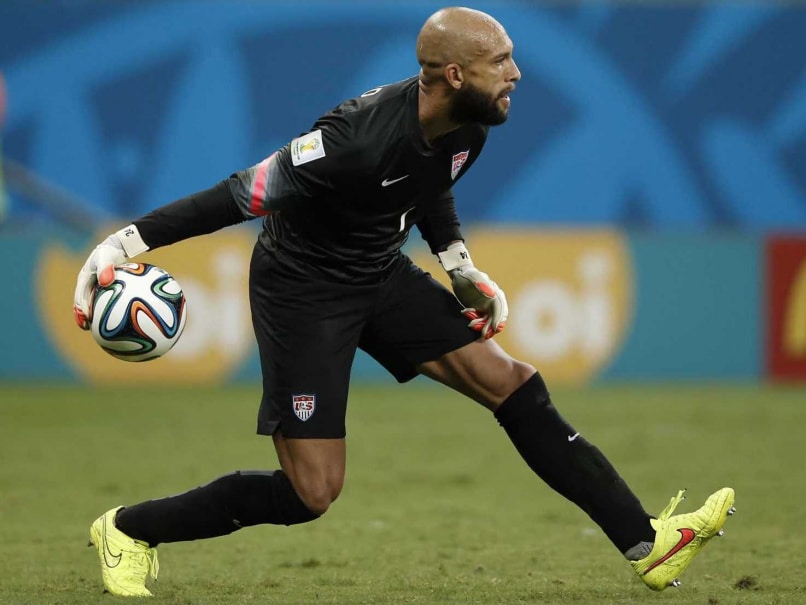 Fans managed to escape security and run on to the pitch in the group match between Germany and Ghana and the last-16 clash involving the United States and Belgium, while an estimated 200 Chilean fans burst into the media centre at the Maracana Stadium before their win over Spain.

The baby-faced Colombian attacker made himself a household name all over the world after his brilliant displays and six goals in their run to a first quarter-final appearance. A mazy run and dinked effort against Japan was bettered by a sensational chest, swivel and volley from 25 metres in the last- 16 win over Uruguay.

The ageing Miroslav Klose scored his 16th World Cup goal to surpass former Brazil striker Ronaldo's record of 15. The German striker, who drew level with Ronaldo with an effort against Ghana in group play, took the record by scoring the second in the 7-1 thrashing of Brazil in the semi-final. (Klose: A Striker and a Gentleman) 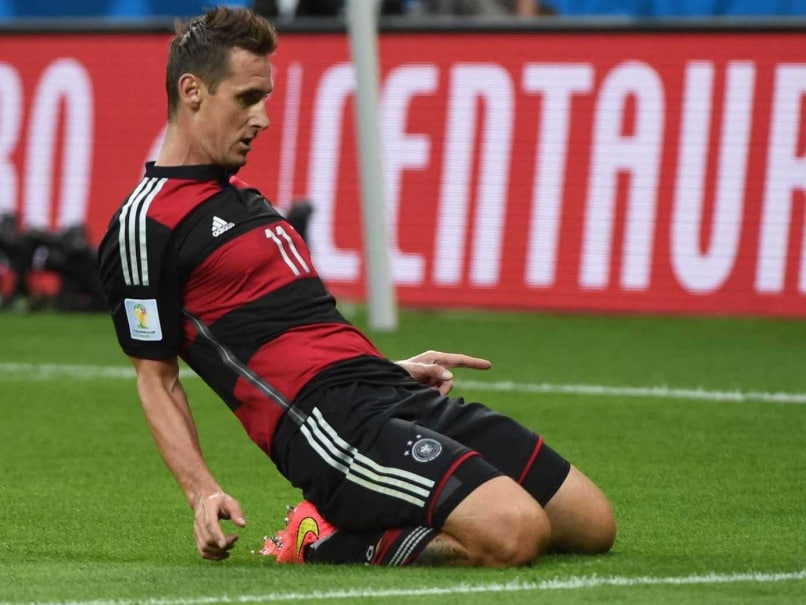 The relatively small Italian kit maker managed to muscle out some of the major brands in Brazil thanks to Costa Rica's unlikely run to a first quarter-final.

Sales of the Ticos' shirt rose 20-fold after they topped Group D by beating Uruguay and Italy and then edging Greece on penalties in the last 16.

Social media and the World Cup were as intertwined like never before. After Arjen Robben's theatrics led to a late penalty against Mexico in the round of 16, fans posted various memes of the Dutch winger lifting an Oscar for Best Actor, competing in Olympic diving, and plunging arms-flailing off the cliffs of Acapulco. Uruguay striker Suarez also received the same treatment after his bite, with pictures posted depicting him wearing a dog-cone round his neck, a Dracula outfit, or a Hannibal Lecter mask.

It was all going so well for the Brazilian number 10 who delivered four goals in four games under the huge weight of expectation from a nation demanding a sixth World Cup win and first on home soil. But his tournament ended at the last-eight stage when he suffered a cracked vertebra after a heavy challenge against the Colombians. His injury led to his team mates wearing 'Forza Neymar' caps before the semi-final with defender David Luiz holding aloft the striker's number 10 shirt before kick off. It did them no good, though, as Germany smashed them 7-1.

Colombian goalkeeper Faryd Mondragon became the oldest player to take part in a World Cup when the 43-year-old came off the bench in the South Americans' 4-1 win over Japan in Group C.

A record-equalling four matches were settled by penalties in Brazil with Costa Rican enjoying the ecstasy of winning a shootout against Greece to make a first quarter-final only to lose to the Dutch the same way. Keylor Navas was arguably the goalkeeper of the tournament for Costa Rica but he could not match the two saves by Dutch shootout specialist, Tim Krul, who came on specifically for the spot-kicks as the Europeans advanced.

Mario Balotelli, whose goal helped Italy beat England, said he would aid out his beaten foe by delivering a victory against Costa Rica in their next match. All the striker wanted in a return was a kiss from the British monarch for his efforts.

Unfortunately, the former Manchester City striker failed to keep up his end of the bargain as Italy lost the match and England were eliminated.

Torrential rain in the north-eastern Brazilian city led to talk of the Group G decider between the U.S. and Germany being postponed. Long tailbacks were seen on roads leading to the Pernambuco arena on the outskirts of the city with fans wading through waste-deep water to watch the game which Germany won.

Pre-match warm-ups for both teams were disrupted because of concerns about the pitch, with players forced to sprint and stretch behind the goal-lines in order to preserve the surface.

They arrived in Brazil with ambitions of successfully defending the title they won four years ago and winning a fourth consecutive major championship, but exited the World Cup embarrassingly early following a 5-1 defeat by the Dutch and a 2-0 loss to Chile in their opening matches.

Goal-line technology made its World Cup debut with France the first team to be indebted to it when Honduran goalkeeper Noel Valladares knocked a rebound from the crossbar over the line before scrambling it clear. Once upon a time Valladares would have got away with it but thanks to German company GoalControl that will no longer be the case.

A Rio court approved the detention of a chief executive of a Swiss hospitality company and 10 other suspects, who are believed to have run a scalping ring for World Cup tickets originally allocated to soccer federations and other VIPs.

Ray Whelan, of MATCH Services, was briefly arrested earlier in the week and released pending a court order. MATCH, which has denied any wrong doing, is the main provider of hospitality packages for the World Cup and paid $240 million for the exclusive rights to sell corporate hospitality at the 2010 World Cup and this one.

Another World Cup debutant in Brazil. Referees have been reaching for their canister to spray the white foam on the ground around the ball at a free kick and also 10 yards - or 9.15 meters - away to ensure no defenders encroach.

Searing temperatures and mid-day kick-offs caused players t wilt in the heat and FIFA approving the first water break. It came after 30 minutes in the Netherlands' 2-1 win over Mexico in the Last 16 in Fortaleza.

Dubbed the 'Alpine Messi' in some quarters, the Swiss midfielder scored a hat-trick in the Group E win over Honduras. It was the 50th treble in World Cup history and the second of the tournament after Thomas Mueller's trio for Germany in their 4-0 opening win over Portugal.

The Japanese referee was at the centre of the first officiating controversy of the World Cup when he awarded hosts Brazil a penalty in their Group A clash with Croatia. The match was level at 1-1 when Fred hit the turf theatrically with Nishimura pointing straight to the spot and leaving Croatia coach Nico Kovac fuming.

Colombian defender Juan Zuniga became public enemy number one in Brazil when he carelessly thrusted his knee into the back of the hosts' talisman Neymar, who suffered a cracked vertebra and was ruled out of the World Cup. (Zuniga a Coward: Silva)