In a superb display of calm nerves, 22-year-old Mario Goetze scored the winner for Germany against Argentina to help his side win FIFA World Cup 2014. 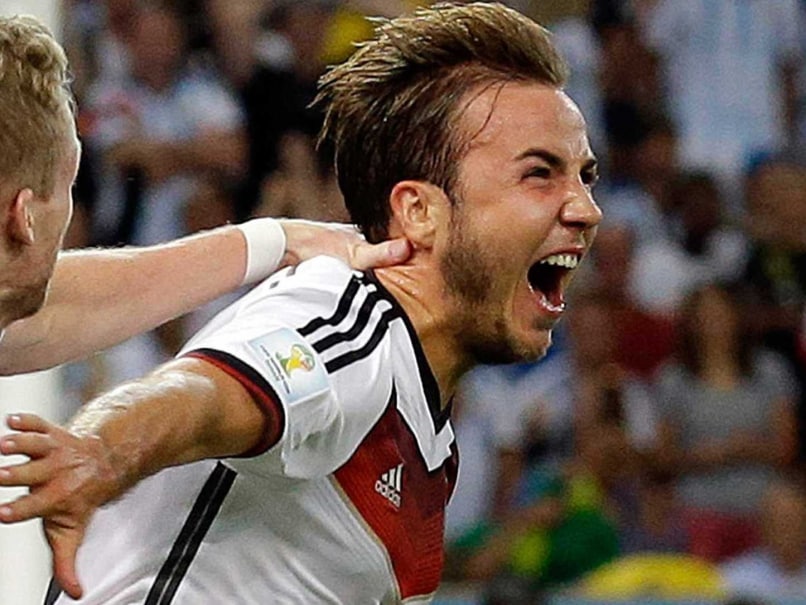 Mario Goetze celebrates the only goal scored in the match between Germany vs Argentina.© AP

Goetze came on for veteran striker Miroslav Klose just before the start of extra-time and his 11th goal for Germany will go down in the history books as he made only his 35th appearance for 'Die Mannschaft'.

He picked up the man-of-the-match award in Rio as Germany became the first European side to win a World Cup in the Americas at the eighth attempt.

Having won two Bundesliga titles with Borussia Dortmund, the club he joined as an eight-year-old, Goetze became public-enemy number one with Borussia fans in April 2013 when he actioned a 37 million euro clause in his contract to sign for Bayern Munich.

The news caused a stir in Germany as Dortmund's star player turned his back on his home-town club after sitting out their 2-1 Champions League final defeat in May 2013 to his future employers having suffered an injury in the semi-final.

He came to Brazil on the back of an average first season at Bayern where he failed to win a regular place in Munich's star-studded starting side despite scoring 15 goals and providing 14 assists in all competition.

He first caught the eye in the Germany shirt with an outstanding performance in their 3-2 friendly win over Brazil in August 2011 when he score a sublime 67th-minute goal to overshadow Selecao star Neymar.

His winning goal in Sunday's final more than makes up for below-par performances in the Brazil 2014 group games. He was left on the bench for the 7-1 drubbing of Brazil in the semi-finals.

He was quiet in the 4-0 opening drubbing of Portugal, then scored Germany's opening goal with his knee having mistimed his header in the 2-2 draw against Ghana before coming off in the 69th minute.

Joachim Loew then brought him off the bench late in the nervy 1-0 win over the United States, but Goetze played only the first half of the 2-1 extra-time win over Algeria in the last 16.

He only came on for the last seven minutes of the 1-0 quarter-final win over France at the Maracana, but will be now be remembered for deciding the final on his return to Rio.

Comments
Topics mentioned in this article
Mario Gotze FIFA World Cup 2014 Football
Get the latest updates on ICC Women's Cricket World Cup 2022 and IPL 2022, check out the Schedule , Live Score and IPL Points Table. Like us on Facebook or follow us on Twitter for more sports updates. You can also download the NDTV Cricket app for Android or iOS.