Brazil lost 3-0 to Netherlands to finish fourth in the FIFA World Cup 2014. They had been one of the strong contenders for the title. 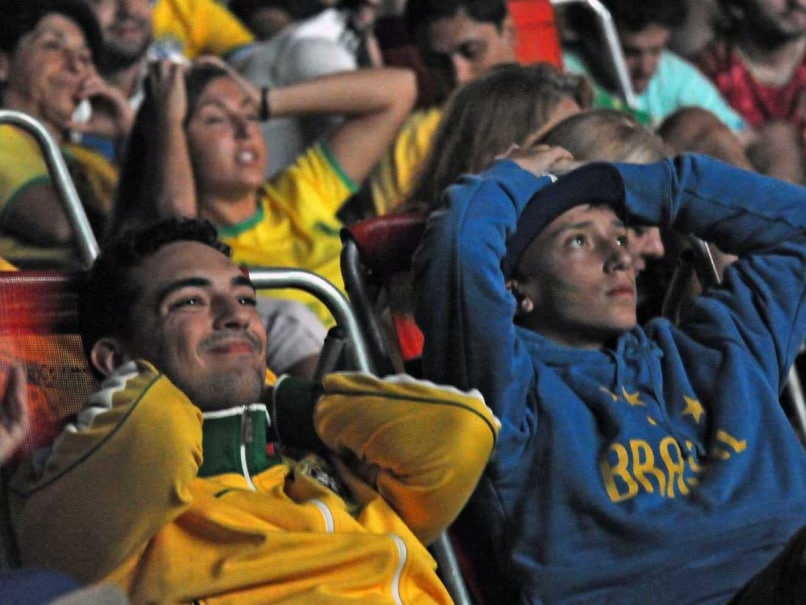 The yellow-clad fans arrived at the Estadio Nacional later, more quietly and with far less face paint than usual. And no wonder, as they were attending the World Cup's third-place game, a match that newspapers around the world had called "a meaningless exercise," "a pointless sideshow" and "the final insult." (Netherlands Finish Third)

Andre Goncalves, 48, an accountant in Brasilia who was attending his fifth game in the stadium with his family, was struck by the difference in the scene outside the stadium Saturday afternoon before the Netherlands played Brazil. "This silence, this calm," he said. "It conveys sadness." (Highlights)

Andre Galvao, a reporter for TV Bandeirantes, was having trouble finding the usual energy from Brazil fans.

"It seems like people have to force themselves to cheer for Brazil," he said. "At the other games, I go live, and everyone starts singing."

But there were still signs that many Brazilians cared deeply about the game. Flights into the Brazilian capital this weekend were sold out, even after fares skyrocketed to five times normal. Hotels are mostly full, a weekend rarity in a city where government business grinds to a halt on Fridays. And the stadium's 69,000 seats were sold out - perhaps for the last time, given its status as white elephant in waiting.

Some who arrived with shiny, colorful match tickets in their bags sounded almost as if Brazil were still playing for the championship.

"For me, it's a chance to be a part of history," said Tiago de Paula, a 32-year-old banker. "Not to put a picture on Facebook, but to be able to tell my children and grandchildren."

He and his sister Camila had jumped through numerous hoops in securing tickets and getting to the stadium from their homes outside Sao Paulo. They woke up at 4 a.m. to make certain they were online when the FIFA website released a trickle of tickets each day. A stranger in Rio de Janeiro said he had tickets to sell them, but required them to wire him money first. Their web efforts were futile, but the stranger came through, and without a generous enough budget for round-trip airline tickets, they flew to the game but would return on a 14-hour bus ride afterward.

"If the game goes to penalty kicks, we'll have to miss them," said Camila de Paula, a 30-year-old actress.

That did not happen. Brazil lost, 3-0, before a crowd that cheered the national anthem, did the wave and sang,  but eventually rained down boos.

Far from the stadium, there were signs that Saturday was different from previous game days.

"For other Brazil games, we had awesome parties, used special green and yellow makeup," said Nathalia Toledo, 28, who manages an eyewear shop. This time, she dressed in black, "like a funeral," and watched with her husband, who declined her request to put in a movie when Brazil fell behind.

"The day before all other games, there was much more beer sold than usual. It was crazily busy," Daniel Silva, a worker at a local supermarket, said Friday. "Today, things are practically at a standstill."

Germany thrashed Brazil, 7-1, in a semifinal on Tuesday, and the next day, workers removed the festive green and yellow decorations from the aisles.

A walk down a commercial street in the city's Asa Sul section before the game revealed few Brazilians wearing team colors. A group of women in matching canary-yellow shirts turned out to be workers on a break from Sol & Vento, a women's clothing store.

"The truth is that it's the store's uniform," Fabiana Duarte, 36, said.

Resenha, a sports bar that reached its 240-person capacity an hour or more before previous Brazil games, maxed out at 200 this time.

"You can see that the city looks like the match is not happening," said Ivonete Ribeiro, a 65-year-old retiree who spent the game in a park, drinking coffee with a friend. "Usually, a Brazil game in Brasilia? My God! Everyone in the streets, in costumes, heading to the stadium."

The prevailing sentiment among residents not attending the game seemed to be one of pensive anticipation. The Germany game "was the worst defeat in our history," said Guilherme Cintra Guimaraes, a 32-year-old lawyer. "But even so, I still think it's worth cheering for the national team. It's been a beautiful World Cup."

But after the loss, fans filed quietly out of the stadium. "The Cup is a success," Rodrigo Barreto, 36, a shop owner in Brasilia, said as he led his family home. "But our team is a failure."

Many residents were looking ahead to Sunday's championship game between Germany and Argentina, Brazil's archrival.

"The Argentines are terrible neighbors," said Erasmo Alberto Losi, a 67-year-old dentist. "On Sunday, what I would like from the Germans is an 8-1 win. Nine to one would be even better."

© 2014, The New York Times News Service
Comments
Topics mentioned in this article
FIFA World Cup 2014 Brazil Netherlands Football
Get the latest updates on ICC Women's Cricket World Cup 2022 and IPL 2022, check out the Schedule , Live Score and IPL Points Table. Like us on Facebook or follow us on Twitter for more sports updates. You can also download the NDTV Cricket app for Android or iOS.