The Russians failed to qualify for the second round despite having a relatively easy group and returned home without a single win. That performance has led to calls for Italian Capello to be sacked, but Russian sports minister Vitaly Mutko said he did not agree. 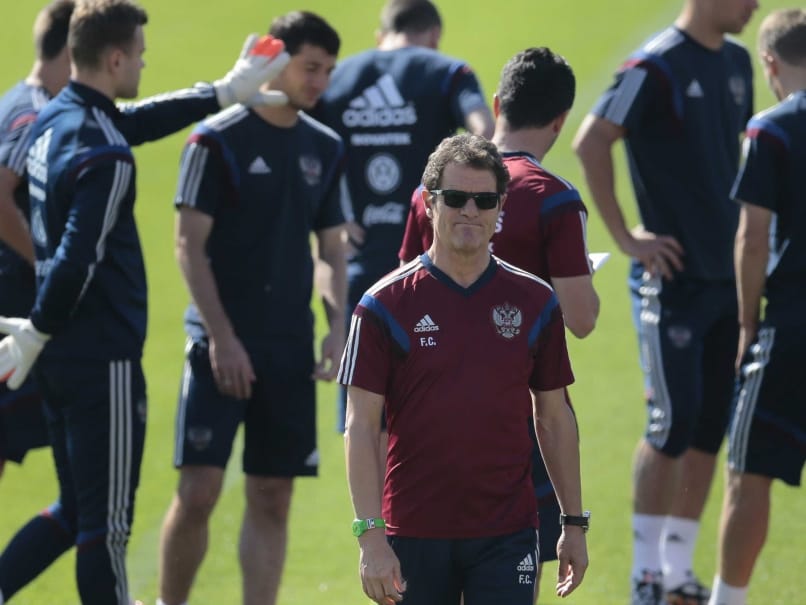 The Russians are willing to give Capello the long rope despite the World Cup failure.© AP
Moscow:

Russia coach Fabio Capello has been given a vote of confidence by Russian sports officials in the wake of his side's World Cup flop in Brazil.

The Russians failed to qualify for the second round despite having a relatively easy group and returned home without a single win.

That performance has led to calls for Italian Capello to be sacked, but Russian sports minister Vitaly Mutko said he did not agree.

"Capello's competence is beyond doubt," said Mutko, who was president of the Russian Football Union (RFU) from 2005-09. (Read also: Fabio Capello Sure of Russia Future Despite Early Exit)

"We have never had a coach of such a high level at the helm of our national side.

"Some hotheads are calling on us to sack Capello and install a young manager, but the post of the national team's manager is not a testing ground and we should refrain from any unreasonable experiments."

Mutko also said that simply qualifying Russia for the World Cup finals for the first time in 12 years was a success story for Capello in itself.

"Participation in the World Cup finals is without doubt a success for us but our team could definitely have performed better in Brazil as none of our group opponents looked that much stronger than our squad."

RFU chief Nikolai Tolstykh has also opposed the idea of sacking Capello, saying the 68-year-old former coach of England, had already done a huge amount of work in Russian football and that would serve for the benefit of the country's game in the future.

"I think a huge amount of work has been done by our national team under Capello's guidance," Tolstykh said.

"He is without doubt a top-class manager and we're seriously interested in further cooperation with him."

Tolstykh added that while Russia's team had tried to play at their best in Brazil, the players still needed to improve their technical skills if they wanted to progress further.

"We shouldn't hold any grudges against our players, they showed their best in Brazil but it was not enough to win a place in the knockout stage," he said.

"We just need to draw the right conclusions out of our team's World Cup performance to create in the future a team that will fit the demands of modern-day football."

Russian striker Alexander Kokorin agreed that Capello should not be held responsible for his team's early exit from the World Cup blaming himself and his team-mates for the team's failure in Brazil.

"Our team had won a place in the World Cup finals for the first time in 12 years and Capello's part in this success is of primary importance," the Dynamo Moscow player said.

"And nobody should blame him for our lacklustre performance in Brazil. It's our (the players') fault only! We had chances to score more, to keep a clean sheet, to advance... but missed them... It's our fault, nobody else's."

Capello, the highest paid coach at the World Cup, signed a new contract with the RFU in January, confirming him as national team manager until the end of the 2018 World Cup, which Russia will host for the first time.

"As long as they (Russians) still want me, I will stay," he has said.

Comments
Topics mentioned in this article
Russia FIFA World Cup 2014 Football
Get the latest updates on ICC Women's Cricket World Cup 2022 and IPL 2022, check out the Schedule , Live Score and IPL Points Table. Like us on Facebook or follow us on Twitter for more sports updates. You can also download the NDTV Cricket app for Android or iOS.