Argentina had already sent the biggest contingent of fans to Brazil during the month-long tournament, flooding cities to follow their hero Lionel Messi's team, even though many have not even had tickets to the games. 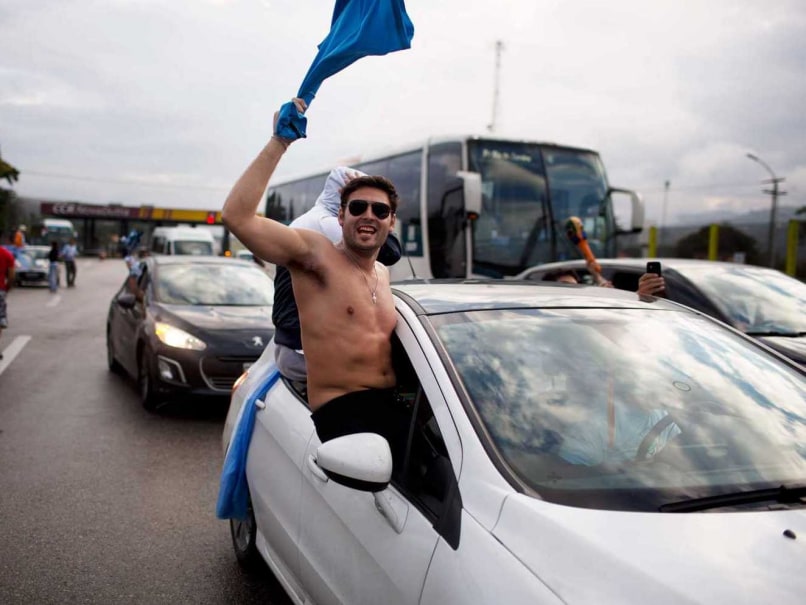 Despite the age-old football rivalry between Brazil and Argentina, Rio's tourism department said it would unfurl "a red carpet" for the 100,000 Argentines expected to arrive in the city.© AP
Rio de Janeiro:

Rio de Janeiro braced Thursday for up to 100,000 Argentine fans arriving by car, bus and motorhome for the World Cup final against Germany at the iconic Maracana Stadium. (Germany, Argentina start final tuning)

Argentina had already sent the biggest contingent of fans to Brazil during the month-long tournament, flooding cities to follow their hero Lionel Messi's team, even though many have not even had tickets to the games.

Tens of thousands who were in Sao Paulo for Wednesday's semi-final triumph against the Netherlands hit the road the next day for the six-hour trek across the southeastern region ahead of Sunday's final. (Related: Neymar Wants Messi to Beat Germans in Final)

They were joining others who have been in Rio for days already, anticipating their team's triumph while camping out at the Terreirao do Samba, an open-air concert venue now packed with cars, minibuses and motorhomes.

Since that venue is full, authorities are offering to house the newcomers nearby at the Sambadrome, the arena that normally hosts Rio's sensual and colorful Carnival parade. Police want to prevent a repeat of them setting up camp on Copacabana. ('Weak Link' Hoewedes Out to Keep Messi Quiet)

At the Terreirao do Samba, Brazilian beats were replaced by the taunting chants of Argentine fans who sang "Brazil, tell me how you feel! Maradona is better than Pele!"

Alan Risso, a 22-year-old prison guard, said he had left the Argentine city of Santa Fe, 2,600 kilometers (1,600 miles) from Rio, with a friend on Saturday afternoon, and they hitchhiked their way north.

"We saw the Argentina-Belgium (quarter-final) on Saturday in a truck," said Risso, who sleeps on the ground under the stars. (Read: Germany not impossible to beat, says Maradona)

On Wednesday they were on Copacabana beach, watching the game against the Dutch on a giant screen with thousands of other football fans at the official "Fan Fest."

For the final, they hope to find a location close to the Maracana, the home of Brazilian football.

Despite the age-old football rivalry between Brazil and Argentina, Rio's tourism department said it would unfurl "a red carpet" for the 100,000 Argentines expected to arrive in the city.

Many will have to watch the game in bars or public screenings because the Maracana, which was originally built for 200,000 spectators, was reduced to a capacity of around 75,000 for the World Cup. (Vatican Says No 'Two Popes' for FIFA World Cup 2014 Final)

Police will be watching out for any troublemakers. Before the World Cup, Brazil said it would prevent 2,100 known hooligans from entering the country. More than 50 have been detained at the border or in stadiums.

Authorities will deploy some 11,500 police officers around the stadium for the final, twice as many as during the six other cup games played there, according to the G1 news website. The justice ministry said it would double the number of soldiers to 1,000.

When Argentina played Bosnia in Rio last month, some 30 Argentinian fans climbed a stadium fence and pushed through doors to enter the arena. Eight were detained but the rest apparently made it inside.

While Brazilians call Argentines "hermanos" (brothers), they have an intense football rivalry. Nevertheless, Brazil superstar Neymar said Thursday he wanted Barcelona teammate Messi to win the Cup, a choice that could anger his countrymen.

Many Brazilians were rooting for the Dutch to defeat Argentina on Wednesday. In turn, Argentines have taunted Brazilians about their team's humiliating 7-1 semi-final defeat to Germany. (Related: Maradona to stay in Argentina team hotel)

Three Argentines painted their bodies in the country's white and blue colours. One inscribed the number "1" on his chest, another an "x" and the last one "7."

Others have waved national flags with an image of Argentine Pope Francis and the words "How do you feel, Brazil, having your daddy at home?"

"I promised three friends that if we win the World Cup, I will pay a hotel room for them with the most beautiful girls in Rio," said Franco Mulle, 22, who arrived on Saturday after more than two days on the road in his small car, where he now sleeps.