Portugal did not fare much better than Ghana, because it, too, was knocked out. Even with the United States losing to Germany, 1-0, in Recife, the U.S. advanced, on goal differential. 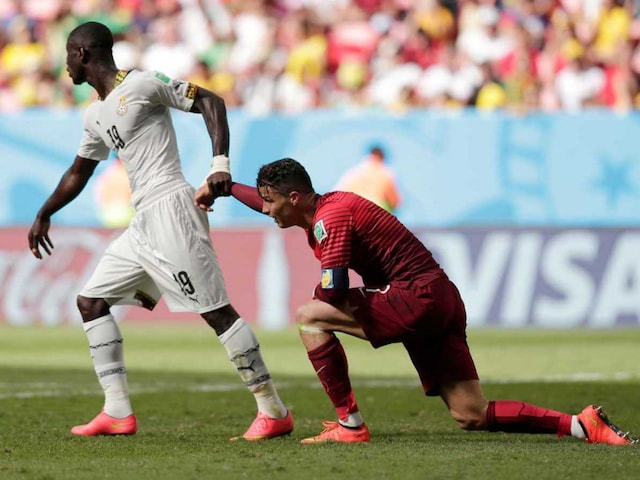 Ghana's Jonathan Mensah helps Portugal's Cristiano Ronaldo to get up after he missed a chance to score.© AP
Brasilia:

That 11 players from Ghana stepped out onto the field at the appointed time Thursday seemed victory enough. Earlier in the day, after a week of infighting and threats of boycotts, the Ghana Football Association suspended two of its star players heading into its critical match against Portugal.

The decision of the governing body of Ghanaian soccer was a victory for coach James Kwesi Appiah, who had battled star player Kevin-Prince Boateng in training and then requested his dismissal. But on the field Appiah and Ghana lost, 2-1, to Portugal on Thursday, and its 2014 World Cup ended in shambles, despite a noble effort at the end.

That Portugal's first goal was scored off the knee of Ghana defender John Boye only underscored Ghana's self-destruction. Still, it played with spirit and attacking flair in its final game to help make for a compelling 90 minutes of simultaneous soccer in two Brazilian cities.

Portugal did not fare much better than Ghana, because it, too, was knocked out. Even with the United States losing to Germany, 1-0, in Recife, the U.S. advanced, on goal differential.

When it ended here, the players from both teams lowered their heads and walked about the field shaking hands, knowing that they would all be going home unhappy. (Match in pics)

Portugal scored first, in the 31st minute, but Ghana evened the score, creating nervous tension for U.S. fans in Recife. But in the 80th minute, some clumsy defending by the Ghanaians left the ball at Cristiano Ronaldo's feet about 12 yards in front of the goal, and he did not miss the opportunity, slotting it into the low-right corner.

Ghana continued to apply pressure, but could not find an equalizer, or the go-ahead goal it needed to advance, and its push forward also created many chances for Portugal, which could have had three or four goals against a team with a short-handed bench.

Boateng, whose brother Jerome Boateng played for Germany, was sent home for what the association described as a verbal attack on Appiah. The other suspended player, Sulley Muntari, had collected two yellow cards and would not have played Thursday.

But those who did play put on an admirable performance, pushing forward and playing with the resolve of a team looking to put its troubles behind it and advance.

Trailing, 1-0, in the 57th minute, Kwadwo Asamoah of Ghana sent in a perfect cross for Asamoah Gyan, who headed it home, giving Ghana new life. Coming into the game, Portugal knew that its best chance to advance would be through an unlikely blowout victory coupled with a heavy loss by the United States.

Ghana, on the other hand, had a more realistic chance, but its chances were made more difficult when Boateng was disciplined. The Ghana association said in separate statements that it had suspended, indefinitely, Boateng for a vulgar verbal attack on Appiah in a recent training session and Muntari for a physical attack against two members of the association.

The latter incident, the statement said, came at a volatile meeting between players and association members over payments the players insisted be made immediately and in cash.

Regarding Muntari, the association said, "The decision was taken in the wake of his unprovoked physical attack on an executive committee member and a management member of the Black Stars, Mr. Moses Armah, on Tuesday."

The meeting was called to resolve the issue of payments to the Ghana players, who did not trust the association to pay them after the tournament. As part of an agreement negotiated with the intervention of Ghana's president, a plane carrying more than $3 million in cash was scheduled to arrive in Brasilia on Wednesday afternoon, or the players might have refused to play.

In the end, they all ended up going home anyway.

Comments
Topics mentioned in this article
Portugal Ghana FIFA World Cup 2014 Kevin-Prince Boateng Cristiano Ronaldo Football
Get the latest Cricket news, check out the India cricket schedule, Cricket live score . Like us on Facebook or follow us on Twitter for more sports updates. You can also download the NDTV Cricket app for Android or iOS.