Philipp Lahm, Germany's Most Intelligent Footballer, Goes Out at the Top

Germany's Philipp Lahm is standing down at the top of his game, only 30 and just five days after joining an elite club of 20 World Cup winning captains when his country lifted the 2014 trophy, which puts him up with Diego Maradona, Franz Beckenbauer and Bobby Moore. 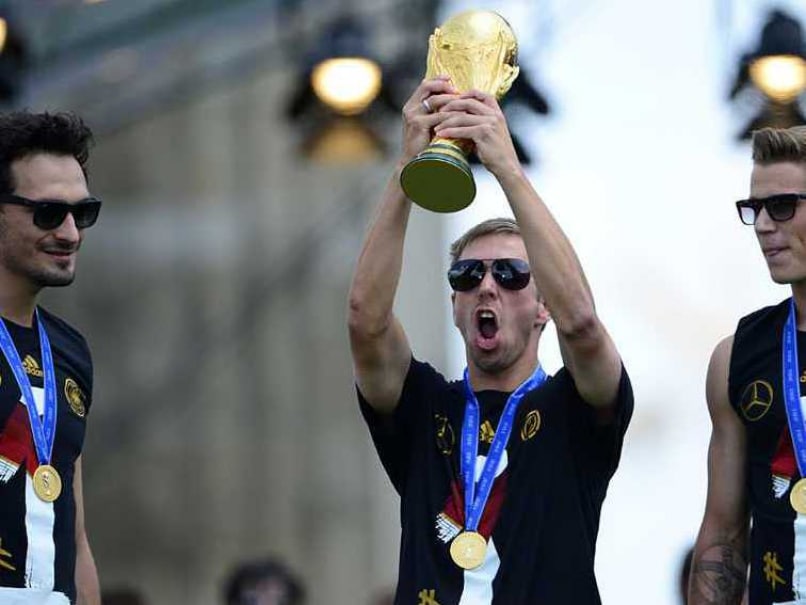 Germany captain Philipp Lahm, who announced his retirement from international football on Friday, is one of the greatest players of his generation. (Also read: Germany's Triumph a Result of Team Work, Says Lahm)

He is also standing down at the top of his game, only 30 and just five days after joining an elite club of 20 World Cup winning captains, which puts him up with Diego Maradona, Franz Beckenbauer and Bobby Moore.

Lahm has not always had an easy career, battling with injury and the hierarchy at his lifelong club Bayern Munich.

But Bayern coach Pepe Guardiola has described Lahm as "the most intelligent footballer I have ever managed."

Lahm, who played 113 games in a decade of international duty for Germany, joined Bayern as an 11-year-old. Then he saw himself as an attacking midfielder in the mould of Mehmet Scholl a pillar of the Bayern team of the 1990 and 2000s.

But when the club decided his best place was as a defender, Italian tough guy Paolo Maldini became his hero.

Lahm has since made his name as a fearless but quiet leader, dependable and adaptable on the field.

Nowhere can that be better seen than in the "Mr 100%" tributes paid by the German press after an inspirational display against Hertha Berlin in a 3-1 win in March.

The victory secured the German title at record speed for Bayern but Lahm carried out a record 134 passes in a league game with 100% accuracy.

At the World Cup, Lahm started the group games in midfield but coach Joachim Loew quickly moved him back to his habitual place at right or left back.

Even then his adaptability shone through. At one stage in the stunning 7-1 semi-final win over Brazil, Lahm forced his way into the penalty area feinted as though about to shoot and passed to Andre Schuerrle for him to score. It was a brilliant playmaker's move.

Lahm has scored five goals for Germany himself. The most important, he says, was a 90th minute strike in the 2008 European Championship semi-final that secured victory over Turkey.

In the final it was a mistake between Lahm and goalkeeper Jens Lehmann that gave away the Fernando Torres goal that gave Spain victory.

With Bayern he has won five Bundesliga titles, five German Cups, the German Super Cup twice and the Champions League, the European Super Cup and the Club World Cup. He has been captain for eight of those trophies.

He has been loyal to his team through thick and thin however.

Lahm made his debut for the senior side in 2002, but there were so many top defenders and midfielders that he was loaned out to Vfb Stuttgart from 2003 to 2005.

He tore a cruciate ligament in one of his last games for Stuttgart and also suffered a stress fracture of the foot.

But back at Bayern he quickly established himself as first choice back, turned down a big money move to Barcelona in 2008 and then quickly became frustrated.

Bayern imposed its then biggest ever disciplinary fine against Lahm in November 2009, reported to be more than 25,000 euros, for giving a newspaper interview in which he criticised the club transfer policy and its tactics.

"It could be that my personality had been underrated," he was quoted as saying in a later interview.

"For me it was important to know how Bayern see me. And there were times when I had the impression that my opinion wasn't 100% appreciated all the time. Now, after several good discussions, I have the feeling of being an important part of the Bayern puzzle. And that was very important to me."

And again, Lahm bounced back and was made Germany captain in 2010 -- to the anger of holder Michael Ballack -- and club captain in 2011.

His current contract with Bayern runs through to 2018, so Lahm's influence will continue to be seen.

Comments
Topics mentioned in this article
FIFA World Cup 2014 Philipp Lahm Germany Football
Get the latest updates on India vs Australia Series, check out the India vs Australia Schedule for 2020-21 and Ind vs Aus live score . Like us on Facebook or follow us on Twitter for more sports updates. You can also download the NDTV Cricket app for Android or iOS.