Netherlands vs Argentina - The Key Battles

The on-field battles that will be key in Wednesday's World Cup semi-final between the Netherlands and Argentina in Sao Paulo. 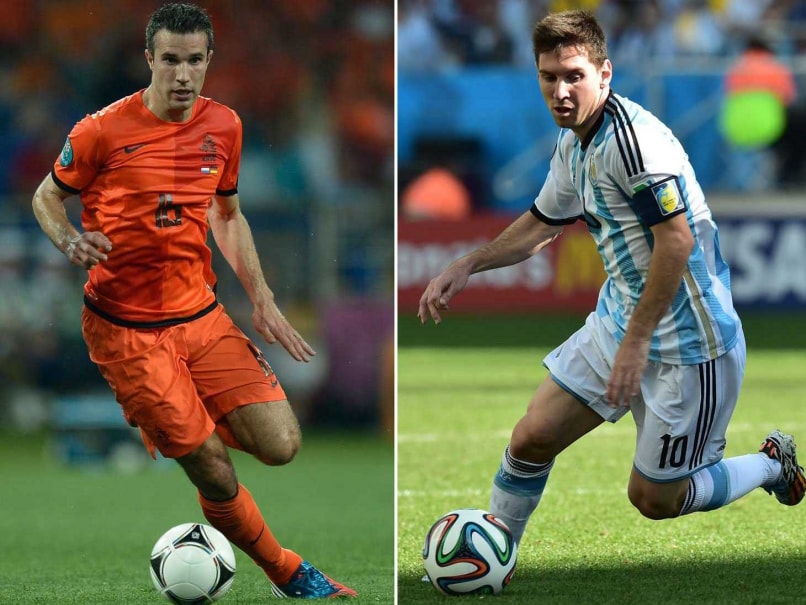 Van Persie will be eager to end his record of never having scored in the knockout stages of a major international tournament.© AFP
Sao Paulo:

Manchester United striker Van Persie will be eager to finally end his record of never having scored in the knockout stages of a major international tournament, and will find himself up against an Argentina defence that could be marshalled by Manchester City man Demichelis.

Against Costa Rica in the quarter-finals, Van Persie, 30, and his fellow attackers were unable to breach a packed opposition defence, but Argentina's commitment to getting forward should give him some more space to play with. (Argentina Vs Netherlands: Google Doodle Inspired by FIFA World Cup 2014 Goalline Technology)

Argentina coach Alejandro Sabella could yet spring a surprise and play with three centre-backs in Sao Paulo, although Demichelis will hope to keep his place regardless.

Now 30, Robben remains one of the most dangerous wingers in the game, the Bayern Munich man having always maintained his terrifying pace on the ball.

Robben loves to cut inside from the right flank onto his left foot, a move that has seen him score countless important goals throughout his career. FIFA's statistics show that he has made a total of 17 solo dribbles into the opposition area, nine more than any other player. (Read: Argentina's Mascherano Warns Against Dutch Threat)

For Argentina, Rojo is available again after suspension and seems certain to return at left-back in place of Jose Maria Basanta.

Rojo has been arguably Argentina's best defender at the competition so far, but he has not yet come up against an opponent of Robben's quality.

Coming into the World Cup, Sneijder's place in the Dutch side was the subject of some doubt. But he has been a prominent player in Louis van Gaal's midfield thanks to his creativity as well as his willingness to go for goal himself. (Related: Argentina Already Winners in Alejandro Sabella's Eyes)

Only Robben has had more attempts on goal than the Galatasaray man, who is also one of just two players to have been denied by the woodwork on two separate occasions. The other is France midfielder Yohan Cabaye.

In opposition to Sneijder, Mascherano patrols in front of the Argentina defence. While his passing ability should not be underestimated, he adds the grit in the middle of the park and will look to stop Sneijder from playing.

The Dutch defence vs Lionel Messi

The injury suffered by Angel di Maria in the win over Belgium is a big blow to Argentina, who will miss his threat coming forward from midfield. Nevertheless, as long as Messi is available, Sabella's side should not need to worry too much. (Louis van Gaal: We're playing Argentina, not Lionel Messi)

Van Gaal has favoured a three-man central defence so far, and if he sticks with that system the Dutch should have the numbers to cope with Messi as well as Gonzalo Higuain and whoever else lines up in attack for Argentina.

However, they lack a world class centre-back, and the absence of the injured Nigel de Jong deprives the Dutch of much-needed bite deep in midfield. Bruno Martins Indi could step forward into that role, or Daley Blind could play there. Whoever it is will have their hands full with Messi.

Comments
Topics mentioned in this article
Robin Van Persie Arjen Robben Lionel Messi Marcos Rojo Argentina Netherlands FIFA World Cup 2014 Football
Get the latest updates on ICC Women's Cricket World Cup 2022 and IPL 2022, check out the Schedule , Live Score and IPL Points Table. Like us on Facebook or follow us on Twitter for more sports updates. You can also download the NDTV Cricket app for Android or iOS.