Miroslav Klose: A Lethal Striker and a Gentleman Who Refused a penalty

Miroslav Klose has been consistently lethal in front of goal in the last three World Cups and contributing to his record-breaking tally has been the fact he has played in 23 matches due to Germany having reached the final and semifinals twice in that time. 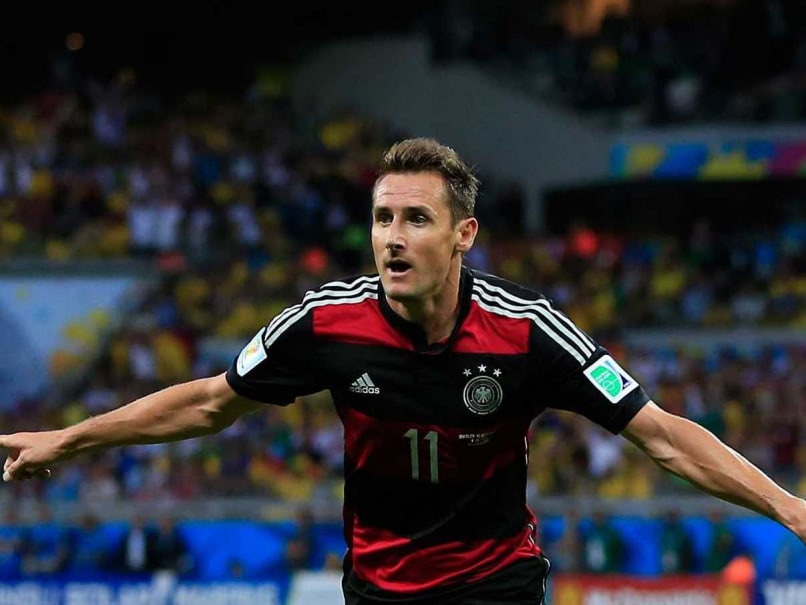 Germany striker Miroslav Klose became the World Cup's all-time record scorer with his 16th goal during their semifinal against Brazil on Tuesday, eclipsing former Brazil striker Ronaldo in the record books with his 23rd minute strike.

The 36-year-old, playing in his fourth World Cup, had already equalled Ronaldo on 15 goals with his dramatic strike in Germany's 2-2 draw against Ghana in the group stage before moving ahead on Tuesday in the match in Belo Horizonte.

The goal was his first in a World Cup semifinal and arguably one of his most important as it put Germany 2-0 up in the last four clash. (Klose Breaks Ronaldo's Record)

A humble man who plays for Lazio after earlier spells at Kaiserslautern, Werder Bremen and Bayern Munich, Klose is the best German striker of his generation whose tremendous sense of fair play has won him admirers in his homeland and in Italy.

The soft-spoken striker, who was born in Poland and spoke almost no German when he moved to Germany with his family as an eight-year-old in 1986, is the antithesis of flamboyant and the epitome of Germany's star-less World Cup teams.

Standing 1.82 metres tall, Klose is almost unstoppable in the air and is known for his superb timing and leaping ability having worked hard to develop those skills. (Germany Thump Brazil)

He has been consistently lethal in front of goal in the last three World Cups and contributing to his record-breaking tally has been the fact he has played in 23 matches due to Germany having reached the final and semifinals twice in that time.

While he is for the most part understated, Klose used to let loose with a spectacular somersault earlier in his career to celebrate important goals. It was a trick he stopped performing until he did it again after equalling Ronaldo's record.

Klose's somersault in Salvador was less than perfect, as he did not quite land upright on his feet, but the fact that he attempted it reflected his joy at having equalised within two minutes of coming on as a substitute.

"Twenty (World Cup) matches and 15 goals isn't bad at all," said Klose, who often brings his nine-year-old twin boys to train with the Germany team at their World Cup training ground in Santo Andre in northeastern Brazil.

As well as being the World Cup record scorer Klose is also Germany's all-time leading scorer with 71 in 136 games.

A trained carpenter, Klose has been hammering in goals for years. He spent five years as a child living in France, where his father Josef played for AJ Auxerre.

His mother Barbara Jez is a former Poland international at handball and Klose's family speak Polish at home.

Klose headed the winner on his Germany debut to earn a 2-1 victory over Albania in 2001 that avoided an embarrassing draw.

He began his World Cup career in 2002 with five headed goals as underdogs Germany reached the final, where they lost 2-0 to Brazil with Ronaldo scoring twice to reach eight for the tournament.

Four years later with Germany as hosts, Klose won the Golden Boot when he scored another five goals in leading Germany to the semi-finals. In 2010 he scored four more in South Africa.

Alongside his inspiring longevity for a striker, Klose has been the beneficiary of outstanding crops of attacking midfielders who have set up many of his 71 goals for Germany.

He has seen off challenges from a number of younger strikers eager to replace him, including Mario Gomez.

Indeed, Klose is the only specialised striker in Germany coach Joachim Loew's squad in Brazil after Gomez was dropped.

Alongside his record-breaking goal tally, Klose will long be remembered for his sportsmanship with his acts of fair play making headline news in Germany.

He told a referee in Italy in 2012 to disallow a goal he had just scored because he used his hand. Seven years earlier, playing for Werder Bremen, he declined to accept a penalty because he did not think he had been fouled.

Comments
Topics mentioned in this article
FIFA World Cup 2014 Miroslav Klose Germany Brazil Football
Get the latest updates on ICC T20 Worldcup 2022, check out the Schedule and Live Score. Like us on Facebook or follow us on Twitter for more sports updates. You can also download the NDTV Cricket app for Android or iOS.