Invaluable and Infuriating All in One

Arjen Robben, the maddening and magnificent Dutch winger, spoke on the sideline with Jorge Luis Pinto, the Ticos' accusatory coach. The score was 0-0 and the game was headed to penalty kicks, but the two men seemed to chat amiably. Then they hugged. 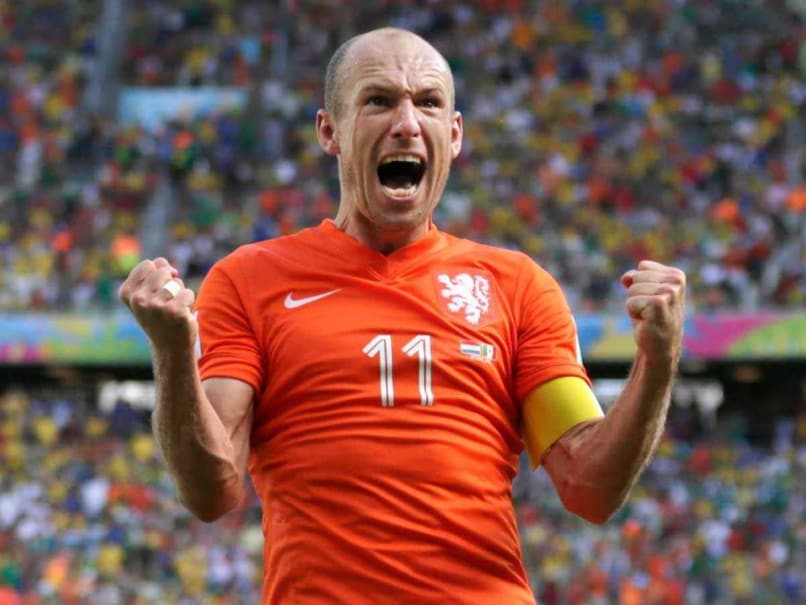 The second period of extra time brought a moment of odd congeniality in Saturday's taut World Cup quarterfinal between the Netherlands and Costa Rica. (Robben Ready for Argentina)

Arjen Robben, the maddening and magnificent Dutch winger, spoke on the sideline with Jorge Luis Pinto, the Ticos' accusatory coach. The score was 0-0 and the game was headed to penalty kicks, but the two men seemed to chat amiably. Then they hugged.

A day earlier, Pinto had cautioned the referee not to be fooled by Robben's theatrics while conjuring his own bit of stagecraft. Robben had a "nasty reputation" for diving, Pinto told reporters, which made Costa Rica "worry a lot." (Robben Defies the Years, if Not Gravity)

Any enmity seemed to be forgotten now. The men lingered for a moment, each perhaps appreciative of the other's skill in the art of soccer melodrama. (Robben Sorry for Diving)

Robben, 30, went back to his ceaseless running and spurred the Netherlands to Wednesday's semifinal against Argentina. He threatened Costa Rica repeatedly with his sprints down the right flank, his knifing runs inside, his crosses and his corner kicks. A thermal map of his forays seemed to inundate the attacking third of the field like a stalled hurricane.

Four times, Robben's defender drew yellow cards for fouls that involved no apparently deliberate diving, even though, in Robben's case, there is frequently some embellishment. Or at least the expectation of embroidery. At times, he throws out his arms as if parachuting from a plane.

He covered nearly eight miles of ground on Saturday, then made his shortest run of the night, approaching his penalty kick, and shot confidently as Costa Rica's superb goalkeeper, Keylor Navas, guessed the wrong way.

Finally, the Netherlands, with a clever goalkeeper switch, won the shootout, 4-3. Afterward, Robben held up his young son. Now he could be days from holding aloft the Dutch's first World Cup trophy.

While Robben may be infuriating to many, he, along with Lionel Messi, may be the most effective player left in this World Cup. Robben has scored three goals, delivered an assist and, with the playmaker Wesley Sneijder, kept the heat turned up on the Netherlands' counterattack as Robin van Persie has cooled.

Robben's presence may become even more urgent on Wednesday, given that van Persie missed Tuesday's training with stomach problems. His availability for the Netherlands' semifinal is not yet known, coach Louis van Gaal said.

Asked whether Robben deserved to be named the top player of the World Cup, his teammate Stefan de Vrij said Tuesday: "Why not? Just look how important he is to us, his threat, the way he can occupy the opponent. He is playing a marvelous world championship."

Dribbling with a kind of armadillo amble that gives his speed a deceptive quality, Robben plays with a sublime predictability in a sport with a frequent ability to astonish. Everyone knows Robben wants to cut inside with the ball at his left foot, but no one seems to be able to do anything about it.

Even Pinto, his antagonist and belated friend from Costa Rica, said that he considered Robben one of the three or four best players in the world.

"He's a model winger," Pinto said. "He's at the peak of his career; he's a nightmare for any team."

He's also a favorite cartoon villain on the Internet, where Robben has been parodied simulating a cliff dive in Acapulco and a platform dive at the London Olympics.

In no small part, Robben has brought the joking and criticism on himself for decorative sprawling during his career. He admitted diving in a second-round match against Mexico, attempting to win a penalty kick in the first half. He later apologized, calling it a "stupid, stupid thing to do."

In the 93rd minute, Robben did win a penalty on a foul by Rafael Marquez that appeared to involve both a trip and an ornamental fall. It resulted in the decisive goal in a 2-1 victory by the Netherlands and a Vesuvian outburst from Mexico's excitable coach, Miguel Herrera.

After the quarterfinal match against Costa Rica, Robben told the Dutch television network NOS that he was tired of accusations of diving. He fell often because he was fouled often on his weaving runs, he suggested.

"I get kicked from all sides, but luckily, I am still fit," Robben told NOS.

After the match with Mexico, he received qualified support from Jose Mourinho, his former coach at Chelsea in the Premier League.

"I know better than most what a fantastic player he is," Mourinho told Yahoo.com. "I also know that because of his speed and because of his creativity, he is punished a lot with fouls by opponents who cannot stop him."

Referees would probably welcome the use of video replays to help them make correct decisions, Mourinho said, as in U.S. professional sports.

Four years ago, Robben carried an injury into the World Cup in South Africa. In the final, he found himself alone with Iker Casillas, Spain's goalkeeper, but could not convert what would have been the winning goal in regulation. Spain finally prevailed, 1-0, on a goal by Andres Iniesta in extra time, and the Netherlands lost for the third time in the championship game.

Before the Netherlands routed Spain, 5-1, in its opening match of this World Cup, Robben said that the unfulfilled breakaway from 2010 was "just a snapshot" in his career but that it would be with him for the rest of his life.

"It's not something you just get over," Robben said. "That is the only way we will get over the 2010 loss, by going one better this time."

Comments
Topics mentioned in this article
Arjen Robben Netherlands FIFA World Cup 2014 Football
Get the latest updates on ICC Women's Cricket World Cup 2022 and IPL 2022, check out the Schedule , Live Score and IPL Points Table. Like us on Facebook or follow us on Twitter for more sports updates. You can also download the NDTV Cricket app for Android or iOS.