The 2014 FIFA World Cup, which happens to be playing out on Brazil's own stage, has dispelled one of sports' most entrenched (if somewhat mythical) beliefs: that Brazilian soccer is a showcase of tempo and timbre designed, above all else, to enthrall and entertain. 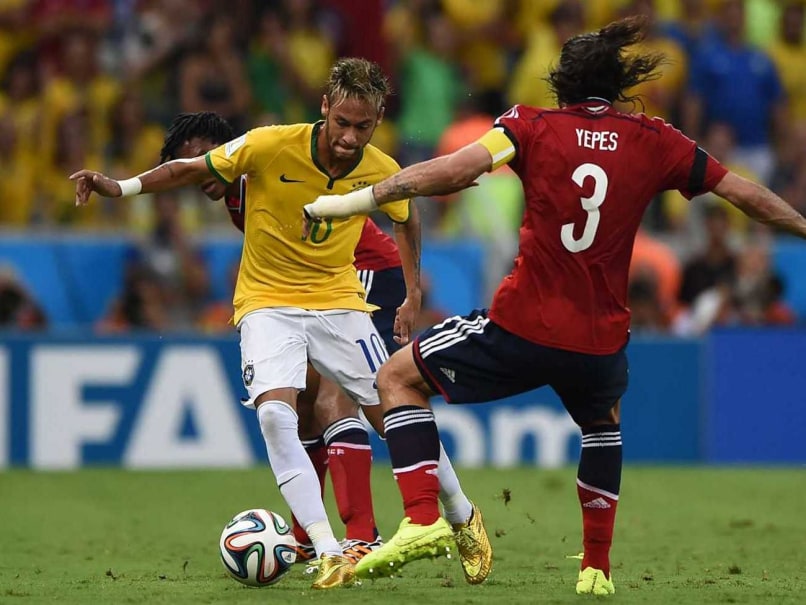 Mario Alberto Yepes (R) vies with Neymar during the quarter-final between Brazil and Colombia at the Castelao Stadium in Fortaleza during the 2014 FIFA World Cup on July 4, 2014.© AFP
Belo Horizonte:

Brazil's national soccer team is the embodiment of the beautiful game, an 11-man samba performance that dazzles fans of any country and leaves its opponents both flummoxed and flat-footed.

Or is it? (A Power Struggle Across Continents)

The 2014 World Cup, which happens to be playing out on Brazil's own stage, has dispelled one of sports' most entrenched (if somewhat mythical) beliefs: that Brazilian soccer is a showcase of tempo and timbre designed, above all else, to enthrall and entertain.

In truth, Brazil plays a rather ugly version of soccer these days, unapologetically pursuing that which every other team in the world chases: wins. (Brazil Will Play for Neymar: Scolari)

It is working, too. While o jogo bonito may be dead, few here are mourning - least of all the fans who will pack the Estadio Mineirao on Tuesday when Brazil faces Germany in the semifinals, two victories away from its record sixth World Cup title.

There is little beauty here. Brazil has recorded the most fouls of any team in the tournament. It has played rough and rugged, raw and resolute. It spills blood. It clogs the field. If you want to see dynamic Brazilian playmakers dancing gracefully around the Germans, you will be disappointed. (Germany Out to Down Brazil)

"Jogo bonito today is not in existence," Bira Brasil Lima, a football commentator for TV Globo, said in an interview. "It is an old mentality. Every team that has come along recently has gotten farther and farther away from it."

Brazilians do not actually use the term jogo bonito, which became globally popular only in the late 1970s after Pele included it as part of the title of his autobiography. Instead, they refer to futebol arte, or artistic football. Futebol arte is glamorous and flowing, a sort of athletic symphony that "makes Brazilians feel happy and proud because it reflects their national characteristics," said Alex Bellos, an author who wrote "Futebol: The Brazilian Way of Life." (Scolari Vows Title for Brazil)

The opposite of futebol arte, Bellos continued, is futebol fora - or, roughly, power football. That is what this Brazilian team has demonstrated throughout the World Cup and most especially in the knockout rounds, where it just managed a Round of 16 victory over Chile and followed that up with a contentious, ultimately brutal, quarterfinal win over Colombia.

In the quarterfinal, both teams engaged in a game riddled by fouls (Brazil committed 31 of the 54) that was punctuated by a bad injury to Neymar, the Brazilian superstar, who sustained a fractured vertebra after being kneed in the back by a Colombian midfielder.

On Monday, Thiago Silva, Brazil's captain, called the foul that felled Neymar a "coward tackle," but he and his teammates have hardly hesitated to play rough over the past few weeks.

Being physical with an opponent's best skill player is de rigueur in soccer these days, and Brazil did the same against Colombia's star, James Rodriguez. There is likely to be a similar approach against Germany's plethora of playmakers; one could argue, in fact, that Germany - with creative midfielders like Thomas M~CHECK~ller, Bastian Schweinsteiger and Toni Kroos - plays the most flowing football of any team left in the tournament.

Neymar, meanwhile, is expected to miss the rest of the World Cup, leaving Brazil without its most flamboyant player. His absence will be considerable on the field - he is the team's top scorer - but he also leaves behind a hole of a more abstract kind.

This has been a trend for Brazilian fans, who have been forced during recent World Cups to find vestiges of futebol arte in a lone player or two. The last Brazilian teams to play futebol arte as an entire unit are generally thought to be the 1982 and 1986 World Cup teams, which featured legends like Socrates and Zico.

Beginning at the 1990 World Cup, when Brazil was coached by Sebastiao Lazaroni, the team began to play with a more rugged style, Lima said. Even when Brazil won the World Cup in 1994, purists were unhappy with the team's methods. The strongest critics pointed to the way Brazil clinched the trophy - in a penalty shootout over Italy, and only after an Italian player missed - as a fittingly unpleasant coda to a championship that lacked beauty.

"There were great players on that team, and there have been on every team," Lima said, "but it is always just a player here or a player there. The game has changed and we want what everyone wants - to win. No one is giving back the 1994 World Cup trophy. No one says it doesn't count." (Brazil Not Focused on Attack)

Indeed, it is hard to imagine many Brazilians quibbling over how this year's World Cup was won if the Selecao, as the national team is known, is able to pull off two more victories. Bellos said the oft-cited question in Brazil - which is better: to win ugly or to lose beautifully? - is really more of a "bar debate," as the majority of fans here have realized that the halcyon days of meandering, gorgeous runs into space on the field are largely in the past.

Now, all but two of the non-goalkeepers on the Brazilian roster play for European clubs, making it more difficult for the team to have the same cohesiveness the groups from the 1970s and '80s had.

Even within Brazil, though, the domestic league has become marked by a changed philosophy that Lima said had been largely popularized by coaches from the southern part of Brazil. Luiz Felipe Scolari, who coaches the national team, fits that mold: He hails from the southern city of Porto Alegre.

"Everyone here is used to this now - the last team that won the Campeonato Brasiliero with an attacking style was Cruzeiro in 2003," Lima said, referring to Brazil's top-division league title. "It's not very entertaining to me, but the teams have been successful, so it has sunk in. Instead of being about attackers, it is all about defensive midfielders."

That change has been on display in this tournament as well. While Neymar was the bright light of the Brazilian team, its foundation has been with its defensive players. Defensive midfielders can apply clamps to the game, shadowing the opposing attackers and making it difficult for them to be creative. Players like Fernandinho, who has shown a willingness to roughhouse, Paulinho and Luiz Gustavo are, in some ways, as critical to Brazil's success as the scorers.

That may be anathema to those who are expecting Brazil to be constantly twirling on the field, but it is also just the simple reality. Scolari has made no secret of his methods: Brazil is here to win, not to entertain.

"Put it this way," Lima said. "If Brazil played beautifully and lost in the final at Maracana, it would still be terrible. Yes, there are some romantics, but for most of the rest of Brazil, all that matters is winning another trophy."

© 2014, The New York Times News Service
Comments
Topics mentioned in this article
FIFA World Cup 2014 Neymar Brazil Football
Get the latest updates on ICC Women's Cricket World Cup 2022 and IPL 2022, check out the Schedule , Live Score and IPL Points Table. Like us on Facebook or follow us on Twitter for more sports updates. You can also download the NDTV Cricket app for Android or iOS.