After the 25th anniversary of the fall of the Berlin Wall on Sunday, Germany's capital is preparing to relive the football-mad nation's Brazil 2014 triumph. 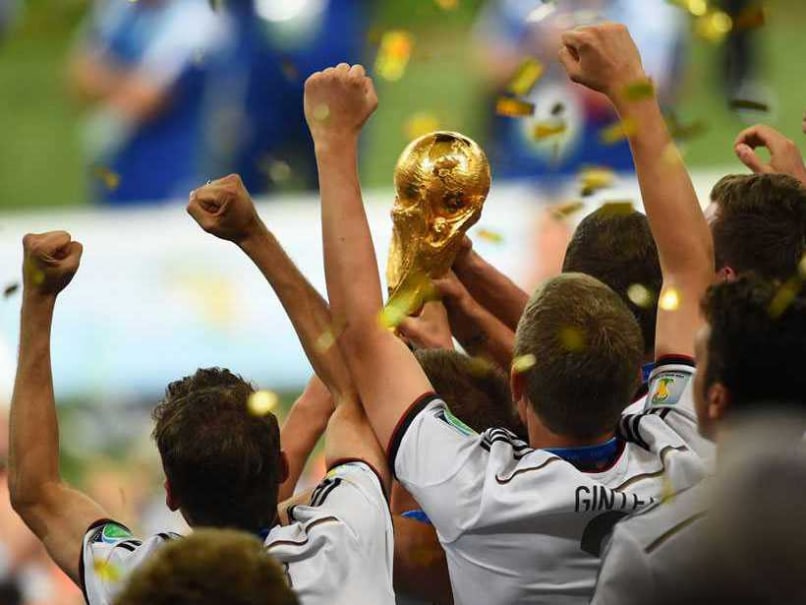 File photo: Germany's players hold the World Cup trophy after winning the final football match between Germany and Argentina for the FIFA World Cup at The Maracana Stadium in Rio de Janeiro on July 13, 2014.© AFP
Berlin:

After the 25th anniversary of the fall of the Berlin Wall on Sunday, Germany's capital is preparing to relive the football-mad nation's Brazil 2014 triumph.

The 90-minute long movie gets its premiere when the behind-the-scenes story of Germany's fourth World Cup triumph is told.

Earlier on Monday, the 23-man squad, who clinched the title in Brazil, will receive the Silver Laurel Leaf -- the country's top award for sports success -- from president Joachim Gauck at his Schloss Bellevue residence.

Loew's squad will also receive their official World Cup winners badge from football's governing body FIFA which they will wear for their Euro 2016 qualifier against Gibraltar on November 14 and away friendly in Spain four days later.

The documentary, which goes on general release next Wednesday, promises to tell the story from Germany's pre-World Cup training camp in north Italy through to their extra-time victory over Argentina at Rio de Janeiro's iconic Maracana.

The project was filmed by the German Football Federation (DFB), who had planned to use the footage for motivation purposes, but was turned into a documentary after Germany's triumph.

"Brazil have Neymar, Argentina have Messi, Portugal have Ronaldo, Germany have a team," is the quote from England captain Steven Gerrard following Germany's 7-1 semi-final drubbing of hosts Brazil which opens 'Die Mannschaft'.

As well as footage of team talks, motivational sessions and player interviews, the film promises to capture some of the pranks and humour from within the squad.

A teaser clip shows winger Thomas Mueller wearing a traditional Bavarian Dirndl dress as a forfeit at a team breakfast.

"The film gets across all the emotions we experienced during the World Cup. I told the crew to shoot it as if we would become world champions.

"We hope to bring the World Cup closer to our fans again and show a different side of how the team experienced the World Cup. And, of course, we want to show a few goals."

Oliver Bierhoff, the team manager, has promised there will be a "few fireworks" at the premiere and the film will be on sale as a DVD just before Christmas.

The proceeds will go to the foundations of both the DFB and FIFA, who waived their right to the material in order for the film to be made.

The documentary of Germany's 2006 World Cup campaign as hosts made 4.1 million euros when the film "Germany, a summer fairytale" went on release and the majority of the money went to a children's charity.

Comments
Topics mentioned in this article
Germany FIFA World Cup 2014 Football
Get the latest updates on India vs England Series, India vs England , live score and IPL 2021 Auction . Like us on Facebook or follow us on Twitter for more sports updates. You can also download the NDTV Cricket app for Android or iOS.