On Monday, after a lackluster start, France recovered in the second half to beat Nigeria, 2-0, at Estadio Nacional and advanced to the quarterfinals for the first time since 2006 in the FIFA World Cup, when it reached the final, and will play Germany. 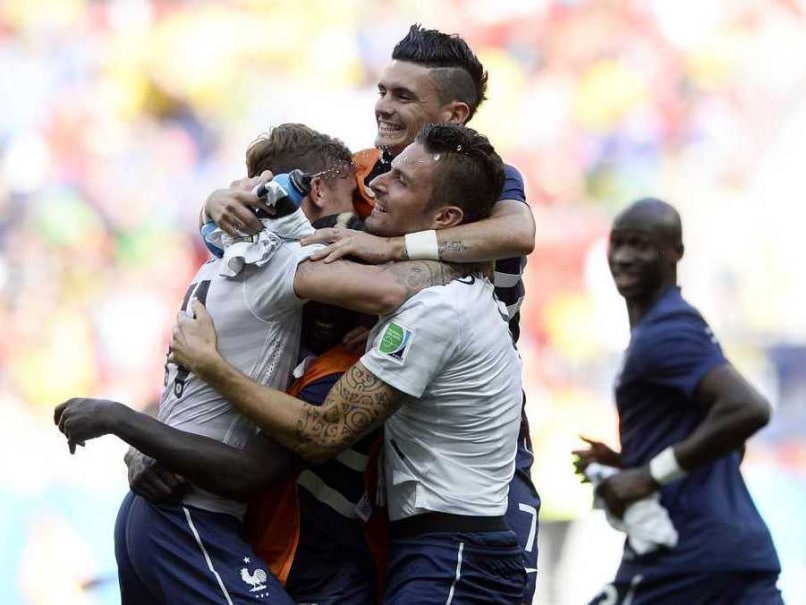 France's forwards Antoine Griezmann, Remy Cabella and Olivier Giroud celebrate at the end of the round of 16 football match between France and Nigeria at the Mane Garrincha National Stadium in Brasilia during the 2014 FIFA World Cup on June 30, 2014. France won 2-0.© AFP
Brasilia, Brazil:

In 2010, France was the shame of the World Cup, a team in open revolt against its coach, Raymond Domenech, and it failed to win a game. But four years later, under a new coach, France is among the final eight teams in the tournament, and this time, it has played four games without losing.

On Monday, after a lackluster start, France recovered in the second half to beat Nigeria, 2-0, at Estadio Nacional and advanced to the quarterfinals for the first time since 2006, when it reached the final, and will play Germany. (Highlights)

"We have come very far," said Didier Deschamps, the French coach, who has never lost as a player or a coach in the World Cup.

France scored in the 79th minute on a header by Paul Pogba, who redirected a corner kick into the net after the Nigerian goalkeeper Vincent Enyeama came out but failed to adequately clear the ball away. When a goalie comes out, he must get to the ball at all costs. But Enyeama got only a fingertip on it, deflecting the ball right to Pogba's waiting head.

"At that moment, it's only him that can decide," Nigerian coach Stephen Keshi said. "His decision is final and, yeah, it cost us. It was big."

The game changed noticeably in the 62nd minute, when Deschamps brought in Antoine Griezmann for Olivier Giroud. Suddenly, Karim Benzema, the French attacker, had much more space and many opportunities, and France moved forward with more fluidity.

In the 90th minute, France was the beneficiary of an own goal by Joseph Yobo, the 33-year-old Nigerian defender who retired from international play after the game - because of age, not disappointment. Yobo was covering Griezmann moving across the mouth of the goal on a low cross when he ended up pushing the ball in.

With the backing of many Brazilian fans, the Nigerians carried the flow of play for much of the game and even appeared to have scored in the first half, until the goal was called back because of offsides. The Nigerians were bitterly disappointed by the call, even though it looked to be correct.

Deschamps, who was on France's championship team in 1998, when the tournament took place in his home country, said he did not mind that the Brazilians rooted for Nigeria.

"We wish we could seduce all the supporters," Deschamps said. "But the World Cup is not in France this time, so we have to adapt to our surroundings."