The match between Netherlands and Argentina, starting in Sao Paulo at 1.30 am IST, will be a clash of the brilliance of Lionel Messi and Arjen Robben. After Germany's 7-1 evisceration of Brazil, it will also be a new pressure cooker showdown between Europe and South America. 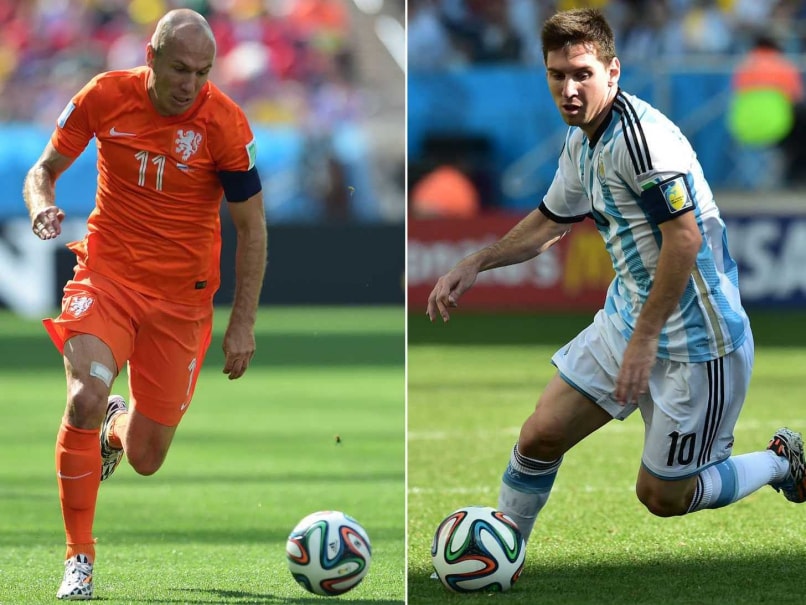 With a rampant Germany awaiting in the final, Argentina and the Netherlands face selection dilemmas going into their World Cup semi-final on Wednesday. (Robben Ready for Argentina)

The match, starting in Sao Paulo at 1.30 am IST, will be a clash of the brilliance of Lionel Messi and Arjen Robben. After Germany's 7-1 evisceration of Brazil, it will also be a new pressure cooker showdown between Europe and South America. (Van Persie Looks to End Jinx)

But Holland's captain and lead striker Robin van Persie is a doubt due to a stomach problem, while Argentina must do without influential midfielder Angel di Maria due to a thigh strain. (History Hangs Heavy as Argentina Face Netherlands)

Dutch coach Louis van Gaal said it was touch-and-go whether Manchester United's van Persie would be able to line up at the Corinthians Arena. (Netherlands Await Argentina)

"Tomorrow (Wednesday), I'll have to take all these decisions, not today," said the 62-year-old, whose side required penalties to overcome Costa Rica in the quarter-finals.

"We have more than 24 hours before the match and Robin van Persie is a very important player for us.

"In principle, my captains always play, but only if they're 100 percent."

Van Gaal also has doubts over senior centre-back Ron Vlaar, who has a knee injury. But midfield enforcer Nigel de Jong made a surprise return to training on Tuesday, a week after being ruled out of the tournament with a groin problem.

Holland's injury concerns mean that the submission of van Gaal's team-sheet will be awaited with even greater anticipation than usual.

He has flitted between a back three and a back four in the tournament, while his in-game tactical adjustments -- such as during the 2-1 win over Mexico in the last 16 -- earned him glowing praise from Argentina coach Alejandro Sabella.

"The Netherlands have a brilliant coach," Sabella said.

"He's able to vary his tactical schemes and has shown that throughout his career, which is not a bad thing at all. He seems like a very intelligent person."

Sabella has indicated that Benfica's Enzo Perez is likely to come in for Di Maria, who traipsed off in the first half of the 1-0 quarter-final win over Belgium.

Left-back Marcos Rojo is available again after suspension, but Sabella said that striker Sergio Aguero, who has been struggling with a muscular problem, will only play according to the "circumstances of the match".

The two teams will carry competing motivations into Wednesday's fixture. The winners will face Germany at Rio de Janeiro's Maracana in Sunday's final.

Two-time cup winners Argentina, who last reached the final in 1990, will be determined to pay appropriate homage to former great Alfredo Di Stefano, who died on Monday aged 88.

The Netherlands, meanwhile, are eager to rediscover their group-stage swagger and prove they are finally ready to claim football's greatest prize after agonising final defeats in 1974, 1978 and 2010.

The second of Holland's final losses came at the hands of Argentina, who won 3-1 as hosts in a Buenos Aires broiling with the menace of the country's military dictatorship.

It is, however, the only time in eight encounters that they have bettered Holland, who memorably won a 1998 World Cup quarter-final in Marseille, France thanks to a majestic goal by Dennis Bergkamp.

Wednesday's encounter has been billed as a shootout between Argentine superstar Messi and in-form Dutch winger Robben, who has scored three goals to Messi's four.

While Messi is bidding to leave his mark on a World Cup after painful quarter-final exits at his first two tournaments, Robben is desperate to exorcise the ghosts of Holland's 1-0 loss to Spain in the 2010 final.

Comments
Topics mentioned in this article
FIFA World Cup 2014 Netherlands Argentina Football
Get the latest updates on ICC Women's Cricket World Cup 2022 and IPL 2022, check out the Schedule , Live Score and IPL Points Table. Like us on Facebook or follow us on Twitter for more sports updates. You can also download the NDTV Cricket app for Android or iOS.