When Netherlands open their FIFA World Cup campaign against champions Spain, Sneijder will take the field for the 100th time for the Dutch side. 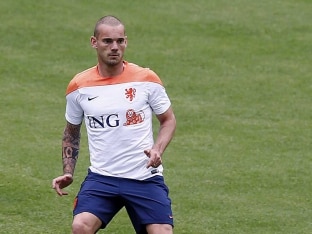 Wesley Sneijder in practice ahead of FIFA World Cup © AP

Wesley Sneijder turned 30 Monday and will earn his 100th cap when the Netherlands face champions Spain in their World Cup opener, but there may not be too many Brazilians joining in the celebrations.

Sneijder is probably the best-known Dutch player in Brazil having scored both goals as his country knocked out the five-time champions in the quarter-finals in South Africa in 2010.

"The people recognise me but I don't get the impression that there's any animosity, quite the contrary," said Sneijder.

The veteran attacking midfielder, who now plays his club football for Galatasaray after successful spells with Ajax, Real Madrid and Inter Milan, even received applause from onlookers as the squad took a stroll along Rio's famed Ipanema beach.

"Come and look, it's that little one," shouted fans to passers-by in reference to the combative star who stands at a modest 1.70m (5ft 7in).

"There was no security but these people only had good intentions," said Sneijder saying it was "typical of the World Cup".

The player is looking ahead to his third World Cup despite a rollercoaster club season in Turkey which at one stage looked as if it could cost him his place in the Dutch squad.

A late burst of form, however, as well as injuries to Rafael van der Vaart and Kevin Strootman, opened the way for Brazil.

"I was a little asleep at the start of the season but I worked hard and now I have been rewarded," said Sneijder, who has nevertheless lost the national captaincy to Manchester United striker Robin van Persie.

"That hurt me, but it's like that. Even if I am not the captain, I am still one of the leaders of the team."

Spain beat the Netherlands in the 2010 final in Johannesburg, but Sneijder does not believe that Saturday's group game in Salvador will necessarily be a repeat.

"We are perhaps no longer a team at the top. But never mind, we are still capable of beating Spain. We just have to play as a unit."

There has been criticism of coach Louis van Gaal's decision to line up with five defenders, but Sneijder said he supports the decisions of the new Manchester United boss.

"It doesn't matter if this tactic is not an attacking tactic for the Dutch team. What counts is results and with this new strategy we will not be worried by anybody," said Sneijder.

"What makes me equally optimistic is the atmosphere in the squad. It's excellent, better than it was two years ago at Euro 2012. I will do all I can to make sure it stays like this because I know from personal experience that it is an important factor in having a successful tournament."

Sneijder, who was dropped by Van Gaal last year, has taken up kick-boxing to boost his fitness for the Dutch campaign and also as a way of extending his career.

"A few years back, I always considered players in their thirties to be old. Now it's my turn, but I have no desire to retire straightaway."

He is also keen to take revenge on Spain.

"It's like a scar that hasn't yet healed. It always gets me down when I think about it."