Pitted in group B with oppositions like Spain, Chile and Australia Netherlands coach Van Gaal is confident of his sides good show in the upcoming FIFA World Cup in Brazil starting June 12th.

Louis van Gaal insists his Holland side's preparations for their opening World Cup clash with Spain are firmly on course. 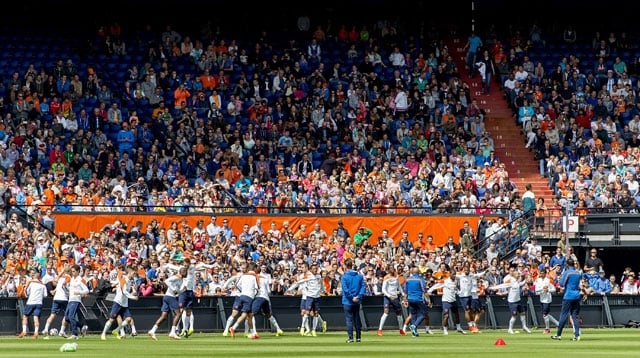 The Dutch boss, who will become the new Manchester United boss following the finals in Brazil, saw his men beat Ghana 1-0 in their latest warm-up game last weekend.

And van Gaal expressed his satisfaction that Holland were one of the few European countries who claimed a victory in the latest round of friendly fixtures as they face their last pre-finals showdown against Wales in Amsterdam on Wednesday night.

Van Gaal said: "We were one of the few World Cup participants who won this weekend.

"Germany is playing 2-2 against Cameroon and Italy also plays with 2-2 against Denmark. Spain wins 2-0 to Bolivia. They get a penalty and make time just before the second goal. Well, great to hear from Spain."

The final comment was tongue-in-cheek at the Netherlands' first game against the Spanish in Salvador on June 13.

Van Gaal changed his formation in the win over Ghana to 5-3-2, but the 62-year-old claims that is a definite indicator over how he will line up when Group B kicks off with a re-match of the 2010 final.

He added: "I'm practising for the first match against Spain. I always look at the opponent we currently take. But we have to make it difficult for Spain. That's what I saw and is why I think we need to play like that. "Despite the fact the media have written about this system, the public is still coming to the stadium unsure. "When the opponent is playing with two strikers, I will usually play in that system (5-3-2 ). When they retire, it may be that I'm going to play 4-4-2."

Van Gaal, who would not comment on his new job with United next season, will give midfielder Jonathan de Guzman every chance to prove his fitness for the World Cup. The on-loan Swansea player will miss the friendly against Chris Coleman's side after he pulled up at the end of the Netherlands' training session in Alkmaar on Monday with a hamstring injury.

De Guzman will be assessed by the Dutch national team's medical staff to determine the severity of the injury.

Now the 26-year-old faces a race against time to be fit for their Group B opener against world champions Spain in 11 days time.

But van Gaal, who will include de Guzman in his 23-man squad, is prepared to wait for the Villarreal star.

Van Gaal said: "Today he felt something in his hamstrings and therefore I stopped the training session as were playing 11 v 11. "Now we have to wait and see in the coming days whether it is bad or not so bad. Hopefully it's a light injury. "We will wait a couple of days and then we will be able to say what it is."

If fit, de Guzman is expected to start in Brazil.

Van Gaal added: "de Guzman has earned his position in the team. He had a rather good game against Ghana. I liked him. I said it to him.

"So now I have to adapt and play another player in his position which is always not so good."