Experts predict Brazil to win against Colombia in their FIFA World Cup quarterfinal match. Colombian fans though are not much concerned with predictions and are busy having a whole lot of fun. 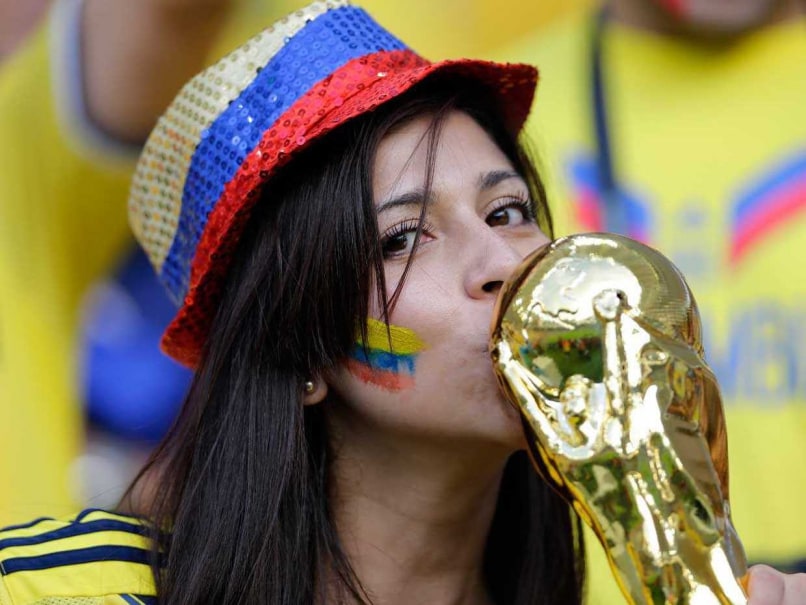 In 25 attempts, Colombia has only beaten Brazil twice, and never managed it on Brazilian soil.

Father-and-son Colombia supporters Orlando and Sebastian Duque are in Fortaleza hoping to see some history being made in this northeastern World Cup city on Friday. (Complete coverage)

The pair followed "Los Cafeteros" on a 10,000-kilometer (6,200-mile) trip to five Brazilian cities as their team has grown from group favorite to outside contender for the title - with four wins, 11 goals and a quarterfinal match against host nation Brazil. (Also read: Top five reasons why Colombia can beat Brazil)

In Fortaleza, the Duques waited outside the team hotel with about 200 other Colombians for a glimpse of players as they left for a training session. They chanted "James, James" - in honor of World Cup's top scorer so far, 22-year-old James Rodriguez, the boyish-looking striker who has found the net five times.

"We can do it this time, because our team is completely different now. They are very focused," said 21-year-old Sebastian Duque, standing next to his father who was wearing a bright yellow wig and matching Colombia team shirt with the name "James" printed on the back.

"The other teams rely heavily on a single player. Argentina has (Lionel) Messi, and it's similar with Brazil and Neymar. But we are a team. And we have many options to score. If James doesn't score, we have (Juan) Cuadrado and Jackson Martinez."

Coached by Argentine veteran Jose Pekerman, Colombia has soared in the world rankings and kept its momentum going despite losing star striker Radamel Falcao to a knee injury before the World Cup. (Related: Forget past performance, focus on Brazil, says Pekerman)

Colombia's army of traveling supporters and South American solidarity has meant the players could count on a home-ground atmosphere as they breezed past their opponents: beating Greece 3-0, Ivory Coast 2-1, Japan 4-1 and Uruguay 2-0.

That luxury will end in Fortaleza, which hosts its last World Cup match Friday.

Difficult flight connections from Colombia and the accumulated cost of travel for supporters means the visitors are likely to be heavily outnumbered by the home fans at Arena Castelao.

Pekerman said Friday's match would be "interesting and very even," acknowledging that crowd support had helped his team so far.

"This will be a test for us ... a new situation and we'll have to deal with it," Pekerman said. "For the Brazilians, it'll be an important factor, giving them encouragement in a difficult match."

Still, the supporters who came to Fortaleza were a pleasant curiosity to locals as they partied along the sea front, copying Colombia's hip-swinging goal celebration dance and chanting "Messi, Neymar, James is your daddy."

Orlando Duque, who runs an insurance business in the Colombian city of Medellin, admitted he could not stay away from work any longer and would have to head home after the game here.

"Whatever happens, that's it for us," he said.

The country's most famous fan, pop star Shakira, has continuously voiced her support for the team on Twitter, writing after the last win: "We're through to the quarters! Huge thanks to James! Best in the world so far! (Goalkeeper David) Ospina was simply amazing! Shak #COL."

She was joined by other celebrities including actor Will Smith, pictured in a Colombia shirt, and pop singer Rihanna.

It's been warmly welcomed in image-conscious Colombia, which last played in the World Cup in 1994. The country battled with a spike in guerrilla warfare, high profile kidnappings, and violent billionaire cocaine traffickers.

For Sebastian Duque, success at this tournament might help the world see his country in better light.

"All of the (trouble) was 20 or 25 years ago. It's completely changed now," he said. "Colombia is a great place and things are going well - the economy, tourism ... Hopefully people will start to see that. At least, slowly."

Comments
Topics mentioned in this article
Colombia James Rodriguez Brazil FIFA World Cup 2014 Football
Get the latest updates on ICC Women's Cricket World Cup 2022 and IPL 2022, check out the Schedule , Live Score and IPL Points Table. Like us on Facebook or follow us on Twitter for more sports updates. You can also download the NDTV Cricket app for Android or iOS.