Memes featuring the 35-year-old Tim Howard exploded on the Internet, politicians clamored to praise him and Wikipedia trolls even momentarily named him the US secretary of defense after his record 16 saves against Belgium. 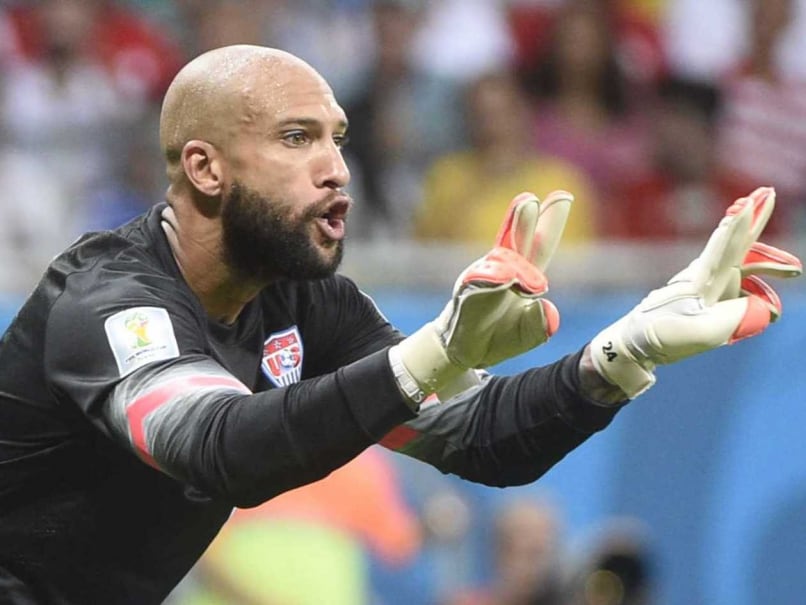 Tim Howard made 16 saves in vain as US lost 1-2 to Belgium© AFP
Washington:

Memes featuring the 35-year-old Howard exploded on the Internet, politicians clamored to praise him and Wikipedia trolls even momentarily named him the US secretary of defense after his record 16 saves against Belgiumon Tuesday. (World Cup Feature: American success will take extra time)

"Tim Howard could've saved my parents' marriage," quipped one Twitter user who, like many, was in awe of the Everton keeper's spectacular shot-blocking.

Howard's scintillating display single-handedly kept the underdog Americans in contention in their round-of-16 clash against Belgium, and cemented his spot as the nation's best-ever keeper.

While the US squad eventually succumbed 2-1 in extra time, Howard's performance earned him an avalanche of accolades in a nation that traditionally obsesses more over baseball, basketball and American football.

Howard-worship dominated the social media conversation even before the first half of the match ended in Salvador.

Vice President Joe Biden hailed him as "most valuable player in the World Cup," and he won gushing praise from congressional leaders, basketball icon Kobe Bryant, and even his Belgian opponents.

Tweeters were calling for "Tim Howard for president" -- or for him to be placed on the US-Mexico border to block illegal immigration. Some said he was "better at defending the country" than President Barack Obama.

A meme fest ensued, with images of Howard's countenance on Mount Rushmore or the $1 bill, or in goal wearing giant Mickey Mouse-style white gloves.

And -- because it's the Internet -- a diving Howard can be seen blocking the exposure of Janet Jackson's nipple during her famed "wardrobe malfunction" at the 2004 Super Bowl.

But for all the humor, there was genuine praise ricocheting across the United States, where many major newspapers featured Howard on their front pages Wednesday, writing how another gritty performance by him and his teammates marked a turning point for US soccer.

"We should be proud of ourselves as a country... I think the way we rallied behind our team has been incredible," Howard told MSNBC from Brazil.

"But also being able to captivate the imagination and hopes and dreams of a nation is really certainly part of that ride," he added on CNN.

Thanks to his soaring popularity and stature, the New Jersey-born keeper -- who lives with Tourette's syndrome -- will have every opportunity to help advance the causes of his choosing.

"He will always be a hero to the Tourette syndrome community," the Tourette Syndrome Association said on its website.

Bald, bearded, tattooed, and with rock-star good looks, Howard will likely have his pick of commercial endorsements and he may even have instantaneously become the face of US soccer, dethroning long-time hero Landon Donovan, marketing experts said.

So what's next for the nation's new favorite son? "Take it in stride," he told CNN. "I'm going to go home and I'm going to relax and hide away, hang out with the kids, get some more tattoos -- just be me."

The White House also weighed in, saying the brick-wall goalkeeper and his teammates will serve as "an inspiration to the next generation of American soccer players," something spokesman Josh Earnest described as a "legacy" they should be proud of.

Comments
Topics mentioned in this article
Tim Howard FIFA World Cup 2014 United States Football
Get the latest updates on ICC Women's Cricket World Cup 2022 and IPL 2022, check out the Schedule , Live Score and IPL Points Table. Like us on Facebook or follow us on Twitter for more sports updates. You can also download the NDTV Cricket app for Android or iOS.