Spain slumped to a shocking 5-1 defeat to Netherlands in their FIFA World Cup 2014 opener. 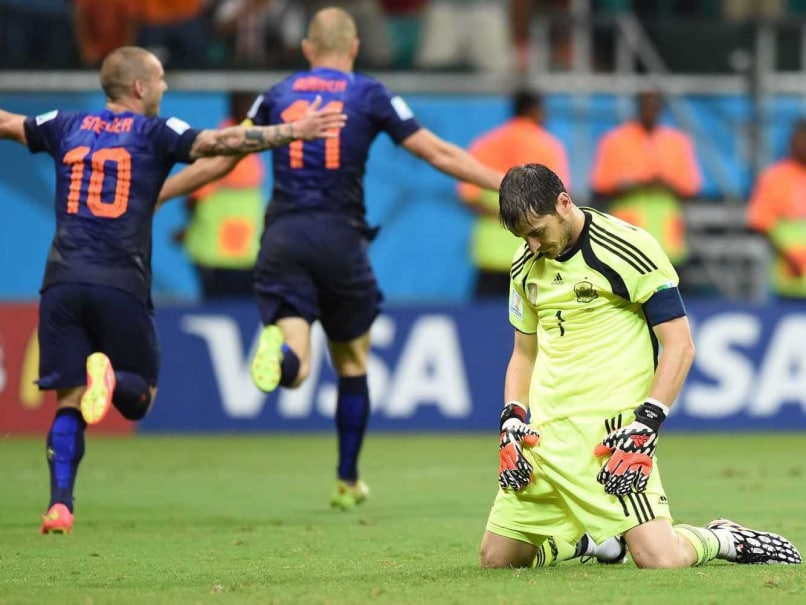 A 5-1 loss to the Netherlands on Friday to open Group B left many wondering whether the team that has dominated world football since 2008 has finally lost its edge - and whether its core philosophy can still remain the same.

"It's not normal, I don't know what to say about it. Normally we always manage our defense well but today we were weak when we needed to stop (Arjen) Robben and (Robin) van Persie," manager Del Bosque said.

Spain also lost their first game at the 2010 World Cup, but that was a 1-0 defeat against Switzerland in a match it dominated. This time it was humiliated, and the loss may have dealt a psychological blow that coach Vicente del Bosque only has five days to address before a must-win match against Chile in Group B.

Del Bosque also has plenty of other questions to address: Does he stick with the core group of players that have led the team to unparalleled success over the past six years? Or does he need to give the nation's famed "tiki-taka" system a revamp?

"Normally if you beat Spain it's 1-0," Netherlands defender Bruno Martins Indi said. "Five-one is not normal because they are amazing players, with a very good head coach, all very experienced."

Spain's midfield of Andres Iniesta, Xavi Hernandez, and David Silva faded badly over the second half at the Arena Fonte Nova on Friday. Goalkeeper Iker Casillas' mistakes cost Spain at least a pair of goals, while defenders Gerard Pique and Sergio Ramos were guilty of errors on the others.

Spain, whose defense has been steadfast in leading it to consecutive European Championships along with its World Cup win in South Africa, was left in disbelief after the country's worst competitive defeat in 64 years.

If Del Bosque does decide to tinker with his lineup, he has plenty of options given the squad of players he possesses.

Either Pepe Reina or David de Gea could be called on to replace Casillas, who has already been relegated to a part-time role at Real Madrid for the last two seasons.

Javi Martinez can easily slot in at center back, while Spain's wealth of midfield talents means Cesc Fabregas, Koke, Santi Cazorla, or Juan Mata could easily start against Chile. Del Bosque could have used a midfielder like Real Madrid's Isco to provide some fresh legs, or Bayern Munich's Thiago Alcantara who missed out with an injury.

Torres replaced Diego Costa in the second half but was largely ineffective, with Spain's strikers failing to generate many opportunities.

"We weren't able to find solutions during the game, we normally have been able to read games very well but they did that better tonight," said Torres, who along with David Villa represents Spain's veteran attack.

Spain recovered from its loss against Switzerland four years ago to win its first world title. With Group B being one of the toughest in Brazil, that might be too tall an order this time around.

"There's no reason to change our style of play. In South Africa the same happened and we ended up champions," Torres said. "I have a lot of faith in this team."