Barcelona striker Pedro Rodriguez said on Thursday that the hot, humid weather in Brazil will be a challenge for all of the teams in the FIFA World Cup. 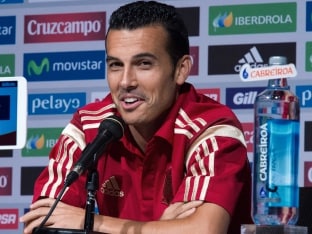 Barcelona striker Pedro Rodriguez said on Thursday that the hot, humid weather in Brazil will be a challenge for all of the teams.

Spain are expecting to feel the heat in their World Cup title defense, and not just from their rivals.

Barcelona striker Pedro Rodriguez said on Thursday that the hot, humid weather in the host country will be a challenge for all of the teams.

Spain reached the final of the Confederations Cup last year, falling 3-0 in the final to Brazil.

"It's always hot and it's very difficult," he said. "Last year we had matches where because of the time and the temperature, it was very complicated to adapt."

In a World Cup that starts on June 12, "we are going to find the same thing," Pedro told reporters in Washington, where the reigning World Cup champions have been training since Tuesday.

The stop-over in the US capital on the way to Brazil provides a chance to get used to hot, humid weather, as well as to recover from jet lag.

"We need to be able to adapt as quickly as possible and be in good physical shape to deal with the conditions, so they don't affect us," Pedro said.

"La Roja" have two Group B matches in cities where they think heat could be a factor, their opener against the Netherlands in Salvador and their second match against Chile in Rio de Janeiro.

They play a third group match in Curitiba.

Chelsea defender Cesar Azpilicueta is already looking ahead eagerly to Spain's June 13 opening match against the Netherlands -- the team Spain beat in the 2010 final in South Africa.

"We know it is going to be very hard," he said. "I think they'll want to win that game, but so will we. Our objective is to be at 100 percent for the opener."

Spain continue their preparations with a warm-up friendly on Saturday against El Salvador.