An impressive performance against Ecuador in the friendly match ahead of the FIFA World Cup has increased Hodgson's faith in Ross Barkley.The England coach however says that Barkley needs more training to achieve be his absolute best. 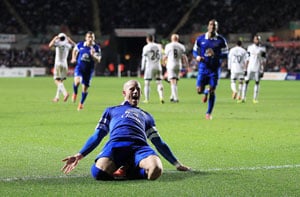 Ross Barkley produced a moment of brilliance for England's second goal in a 2-2 draw with Ecuador on Wednesday, but manager Roy Hodgson said he still had much to learn.

Barkley's dribbling at speed and precise pass to Rickie Lambert was the highlight of England's performance in the World Cup tune-up, and the Everton midfielder showed some other glimpses of his undoubted talent.

"Ross Barkley had some good moments. I think he needs to learn when he can turn with the ball and when he has to keep the ball," Hodgson said.

"But that's quite normal for a player his age. He'll be quite happy to have played so long on his first start," he added.

With some in England already starting to compare Barkley to Paul Gascoigne, star of England's 1990 World Cup semi-final run, Hodgson could be forgiven for not joining in the eulogies after Barkley's first start for the national team.

Asked at the post-match press conference whether he would be prepared to start Barkley in the attacking midfield role in the World Cup, Hodgson felt that the media were over-focusing on the 20-year-old.

"Whenever I come to a press conference there always seems to be an enormous obsession with one player," Hodgson said.

"I will obviously be prepared, I have said so many times, to start any of the players in this tournament. But I don't know I am prepared at the moment to share your obsession with Ross Barkley's performance today.

"He lost the ball an awful lot of times as well and I think if he is going to really be the player that we want him to be he has got to make better decisions about when he turns with the ball, when he keeps the ball," said Hodgson, who played with Jack Wilshere and Frank Lampard in the central midfield roles with Wayne Rooney on the left flank and Alex Oxlade-Chamberlain on the right.

"Having said that, that's not a severe criticism of him, but I have to say I thought there were other performances today that certainly would have merited more attention than Ross Barkley's - so maybe that is where the surprise comes from," he added.

Clearly pleased with his team's performance, Hodgson believed the praise deserved to be shared around.

"Oxlade-Chamberlain was outstanding, Phil Jones was outstanding, Jack Wilshere was very, very good in the middle of park, Lambert scored a magnificent goal -- there is four off the top of my head.

England now face Honduras, also in Miami, on Saturday before heading off to Brazil where they will open their campaign against Italy on June 14 in Manaus.

The major concern for Hodgson is a knee injury picked up by Oxlade-Chamberlain who is due to have a scan amid concern that he could have ligament damage that would rule him out of the tournament.