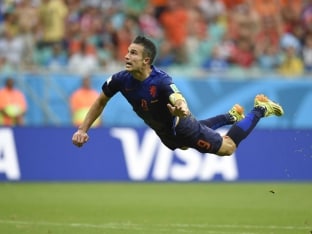 Captain Robin van Persie sought to temper Dutch excitement with a dose of his own experience but had to admit his opening goal against Spain on Friday was worthy of a brief party.  (How Netherlands Humiliated Spain | Match Report)

"I've been to five tournaments now and so I know it's just the start. I don't want us to be too excited about the first win, it's only three points," he told reporters after the Netherlands upset the world champions in a stunning start to World Cup Group B with a 5-1 triumph at the Fonte Nova arena.

"We have to enjoy tonight and take some fun out of it, but from tomorrow the focus is on Australia because it was an incredible experience for all of us but it's only the first match."

But Van Persie was struggling to contain his enthusiasm after being named man of the match.

"It was incredible," he said. "We had a setback when they scored but our equaliser came just before halftime, just at the right time.

"It was a brilliant goal, I have to be fair. It was a bit of a gamble but just before the pass I saw (Spain goalkeeper) Iker Casillas out of his goal. It was a header, really a lob-header, but a great goal."

Van Persie beat the offside trap to launch himself in the air and head home a raking cross from left wingback Daley Blind - in so doing becoming the first Dutch player to score at three World Cups.

"Then we got our second and after that we just couldn't stop going. We told that to each other at halftime to keep going.

"At 3-1 we went for the fourth and in my opinion it could have been five well, actually it was five ... I mean six, seven or eight," he added, perhaps betraying still some disbelief at the emphatic nature of his team's triumph.