Germany will play European rivals France in a bid to enter the semifinals of FIFA World Cup 2014 where either Brazil or Colombia would be waiting. 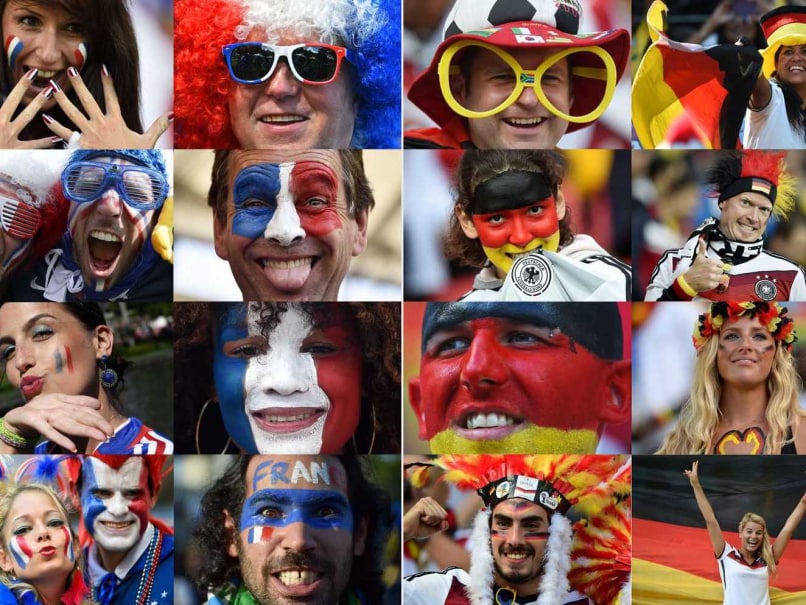 France and Germany will take on each other in the FIFA World Cup quarterfinal© AFP
Rio de Janeiro:

This represents an acid test for Germany coach Joachim Loew with his side heavily criticised for below-par performances at Brazil 2014.

A place in Tuesday's semi-final against either Brazil or Colombia in Belo Horizonte is at stake.

"Didier Deschamps has turned France around since 2010 and we're looking forward to another classic," said Loew who took charge after the 2006 World Cup.

Their 4-0 hammering of Portugal in their opening group match confirmed their status amongst the world's elite, but a series of unimpressive performances have seen Loew's Germans receive heavy criticism.

Having been held to a 2-2 draw by Ghana, then grinding out a 1-0 win over the USA in their final group match, poor finishing saw Germany labour to a 2-1 extra-time win over Algeria in Monday's last 16 clash.

Former captains Michael Ballack, Oliver Kahn and Lothar Matthaeus have all questioned Loew's selections with playmaker Mesut Ozil struggling and centre-backs Jerome Boateng and Benedikt Hoewedes being played out of position as wing-backs.

"That was the worst performance for years," Ballack reflected after the Algeria match, while Kahn was equally unimpressed: "This line-up isn't working any more".

Loew has a contract with the German FA (DFB) until June 2016, but a quarter-final exit will put him under pressure to resign despite steering his side to the semi-finals of the last three major tournaments.

In contrast, France have risen steadily under their coach Deschamps and are unrecognisable from their chaotic 2010 campaign in South Africa.

With Karim Benzema in top form, France are dreaming of their first World Cup title since their 1998 triumph on home soil, but their focus is solely on Germany.

"Everyone can dream, including me, but I'm a pragmatist and a realist, Friday is the only thing that counts," said Deschamps.

While the Germans are struggling to find the right combinations for their fast-paced attacking game, Deschamps says his harmonious squad is a "pleasure" to work with and the French will "give it everything we've got".

Honours are even in terms of recent meetings with France claiming a 2-1 win in Bremen in February 2012, while Germany claimed revenge by the exact same scoreline in Paris 12 months later.

The French lead the series with 11 wins to Germany's eight in 25 previous meetings.

Both sides played down the relevance of their legendary 1982 World Cup semi-final, which Germany won 5-4 on penalties after a dramatic 3-3 extra-time draw.

With the media quick to ask whether France can claim some World Cup revenge, both Loew and Deschamps pointed to the fact most of their respective players were not born at the time.

Germany will have centre-back Mats Hummels back after missing the Algeria win with flu, while Lukas Podolski is fit again after a thigh strain.

There is a question mark over midfielder Bastian Schweinsteiger who came off with cramp, but gave the thumbs down when pointing at his knee, which blighted him with tendinitis before the World Cup.

There is a question mark over France defender Raphael Varane, who spent the night in hospital with dehydration after Monday's 2-0 win over Nigeria in the last 16.

Liverpool defender Mamadou Sakho is fit again after knee problems, while it remains to be seen who Deschamps names as striker between Olivier Giroud or Antoine Griezmann.

Comments
Topics mentioned in this article
Germany France FIFA World Cup 2014 Football
Get the latest updates on ICC Women's Cricket World Cup 2022 and IPL 2022, check out the Schedule , Live Score and IPL Points Table. Like us on Facebook or follow us on Twitter for more sports updates. You can also download the NDTV Cricket app for Android or iOS.