Costa Rica have no plans of crashing out the FIFA World Cup 2014 but fear their dreams may come crashing down if Netherlands' Arjen Robben repeats his 'mock dive' from the previous match against Mexico. 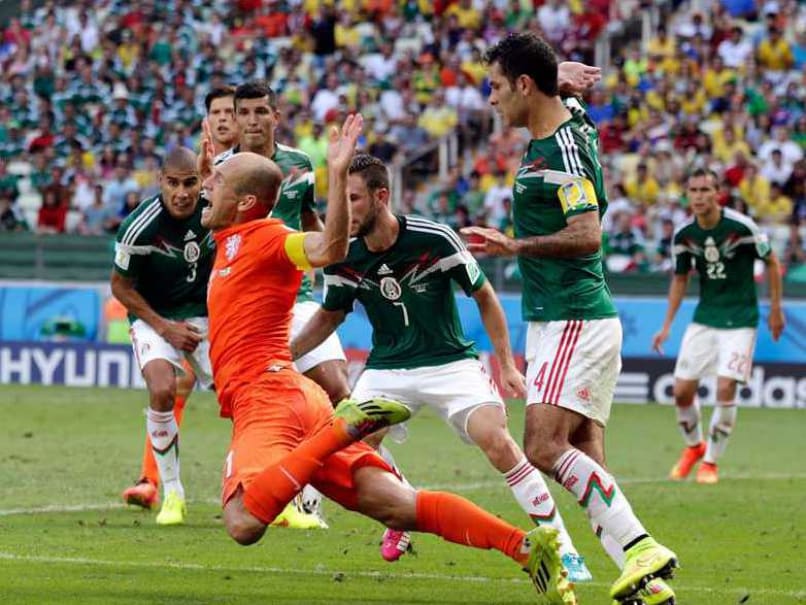 Arjen Robben 'fell' in Netherlands's previous World Cup match against Mexico and it was enough to earn a crucial penalty.© AP
Salvador:

Costa Rica issued a plea to the referee on Friday to keep an eye on Arjen Robben's diving. (Complete FIFA World Cup 2014 coverage)

The Netherlands forward earned an injury-time penalty in the second round of the World Cup, giving his team a 2-1 win over Mexico. Costa Rica coach Jorge Luis Pinto is worried about more of the same when his team faces the Dutch in the quarterfinals on Saturday in Salvador.

"FIFA and referees, please watch out. That could be a crucial factor in the match," Pinto said. "This is very important, Robben's diving. ... That makes us worry a lot."

Throughout his career, the 30-year-old Robben has had a reputation for frequently falling and looking for a penalty or free kick. The Bayern Munich forward went down theatrically under a soft challenge late in the match against Mexico, but said the penalty was legitimate. He also said he dived in the first half. (Also read: Can Arjen Robben tame 'underdogs' Costa Rica?)

"Robben is a great player, but he has this nasty reputation of frequently diving on the pitch," Pinto said, adding the Netherlands winger should be given a yellow card by referee Irmatov Ravshan if he dives.

"Well, that might be a logical solution," Pinto said. "He would start thinking about making another dive as he as he could leave the pitch with two yellow cards."

Costa Rica is one of the biggest surprises of the World Cup. The Central American team finished first in Group D, beating former champions Uruguay and Italy and holding England to a 0-0 draw.

Costa Rica then reached the World Cup quarterfinals for the first time by beating Greece on penalties in the second round.

"We want to keep writing history," Costa Rica midfielder Johnny Acosta said. "In 90 or 120 minutes, we will see which is the better team tomorrow."

Comments
Topics mentioned in this article
Costa Rica Netherlands FIFA World Cup 2014 Arjen Robben Football
Get the latest updates on ICC Women's Cricket World Cup 2022 and IPL 2022, check out the Schedule , Live Score and IPL Points Table. Like us on Facebook or follow us on Twitter for more sports updates. You can also download the NDTV Cricket app for Android or iOS.