Repeated protests in Brazil's Sao Paulo has disturbed the preparations for the upcoming FIFA World Cup, as police clashed with striking subway workers and massive traffic jams snarled the mega-city and fans booed the national team. 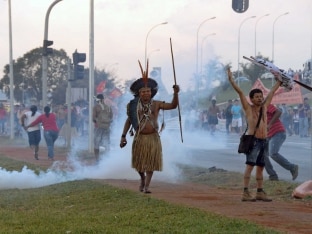 The scuffle in the metro station and a separate anti-government protest that gathered 3,000 people raised fears of more unrest when Brazil and Croatia open the World Cup in Sao Paulo on Thursday.

Police fired tear gas and swung batons to beat back picketing strikers inside a central station after commuters tried to enter.

The strike, affecting millions of commuters, will continue for a third day Saturday after the workers' union and their employers failed to reach a deal on a pay raise.

Across town, meanwhile, monstrators blocked the street in front of the Central Bank in a peaceful protest organized by the Force Union against the economic policies of President Dilma Rousseff.

"Our problem is not with the national team. We will cheer for them. But on October 5, we will send Dilma Rousseff to hell," said union leader Paulo Pereira da Silva, referring to the upcoming presidential election.

Sections of the crowd jeered the team led by Barcelona star Neymar as it struggled to find the net against the Serbians.

"Our players are ready to accept criticism when they don't play well," said manager Luiz Felipe Scolari, whose team is under massive pressure to deliver a record sixth World Cup trophy.

While Brazil played at Morumbi Friday, the first World Cup game will be played in the city's new Corinthians Arena, which is awaiting safety clearance to operate at full capacity, highlighting the authorities' struggle to be ready for the tournament.

Officials are hard-pressed to resolve the metro strike because the subway will be the main link to the arena for legions of fans.

With three of five metro stations disrupted by the strike, bumper-to-bumper traffic stretched as much as 251 kilometers (155 miles) as the subway system's 4.5 million users turned to cars or buses amid torrential rain.

"I'm going to have to return home. I can't get to work like this," said Pedro Henrique Rodrigues, a 28-year-old pastry factory worker who stood in a massive bus line.

It was the latest strike to hit Brazil, where bus drivers, teachers and police have staged walkouts in other cities in recent months to demand better wages.

It was in Sao Paulo that mass protests erupted exactly a year ago as citizens took to the streets to voice anger at rising public transport fares.

The unrest ballooned into nationwide demonstrations against the more than $11 billion being spent on the World Cup, with more than one million people taking to the streets to demand money for hospitals and schools.

The protest movement has lost momentum since last June, but the transportation chaos risks rekindling anger in the countdown to the opening ceremony.

Rousseff has defended the government's preparations, insisting the money spent will leave a legacy of airports and transport infrastructure that will benefit Brazil for years to come.

But much of the other promised train and road infrastructure has been shelved.

Several of the 12 stadiums have yet to be finished. Eight workers died in construction accidents.

The president's popularity has taken a hit, with an opinion poll Friday showing that her support for the October election dropped to 34 percent in June from 37 percent in April.

She still led the pack of candidates, however, with her main rival, social democrat Aecio Neves, falling by one point to 19 percent.

Despite the latest troubles, FIFA president Sepp Blatter predicted Thursday that tensions would subside once the football began.

"I'm an optimist. After the tournament kicks off, I think there will be a better mood," Blatter said.

Teams are trickling into Brazil. The Dutch team walked along Rio's Ipanema Beach after arriving Friday.