Oliver Bierhoff, who has been in team manager of Germany since 2004, found himself in the thick of it when punches were thrown after Argentina lost a tense penalty shoot-out to Germany in the FIFA World Cup 2006 quarters. 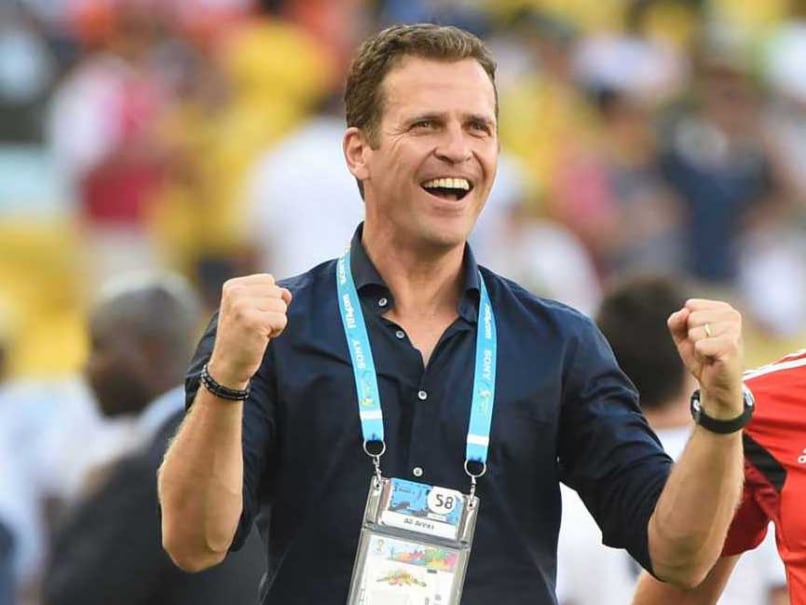 Germany's business manager and former striker Oliver Bierhoff celebrate after victory in the quarter-final between France and Germany at the 2014 FIFA World Cup.© AFP

German team manager Oliver Bierhoff warned his players on Friday to avoid a repeat in the World Cup final with Argentina of the ugly scenes that marred the end of the two sides last eight clash in the 2006 finals.

Bierhoff, who has been in the post since 2004, found himself in the thick of it when punches were thrown after Argentina lost a tense penalty shoot-out to Germany. (Loew Saves Germany's Best or Last)

Of the three players punished for the punch up just Maxi Rodriguez remains. (Will Messi Triumph vs Germany)

"The Argentinians are very warm people and great hosts, but on the pitch they have a bit of a personality change and get fired up," said Bierhoff. (Vatican Calls For Global Ceasefire)

"They have fire in their eyes, which we will have to be ready for and not provoke them.

"They play hard, aggressive physical football, which means we can't steer away from our football philosophy and must focus on what we have to do," added the 46-year-old former international striker, who was a member of the side that won the Euro '96 title and played in the 2-0 defeat by Brazil in the 2002 World Cup final.

Bierhoff says Argentina will be a different proposition compared to hosts Brazil after Germany ran riot to claim a remarkable 7-1 semifinal win in Belo Horizonte.

"It will be a different game compared to the semifinal, they defend deep, leave little space to run into and wait for (Lionel) Messi to show a moment of magic," said Bierhoff.

"We have to play our own game, run the extra mile and not give them the space they need."

This is the sixth time Germany will meet Argentina at the World Cup and the third time in the final -- with both sides tied at 1-1 in terms of the title match.

Germany lost 3-2 in Mexico in 1986 and gained revenge four years later beating Argentina -- who were reduced to nine men -- 1-0.

German captain Philipp Lahm, one of five players in the present squad who faced Argentina in Berlin eight years ago, said history will not be a factor at the Maracana Stadium.

"I don't think there aren't so many players still around from 2006, I remember it came to fists, pushing and shoving after the final whistle, but I don't think it will play a role," said the 30-year-old.

"It doesn't matter if it was four or eight years ago, we just want to focus on Rio."

Comments
Topics mentioned in this article
Germany Argentina FIFA World Cup 2014 Football
Get the latest updates on ICC Women's Cricket World Cup 2022 and IPL 2022, check out the Schedule , Live Score and IPL Points Table. Like us on Facebook or follow us on Twitter for more sports updates. You can also download the NDTV Cricket app for Android or iOS.