Neymar was carried off in agony after a heavy challenge from Juan Camillo Zuniga towards the end of Brazil's 2-1 quarter-final win over Colombia in FIFA World Cup 2014. 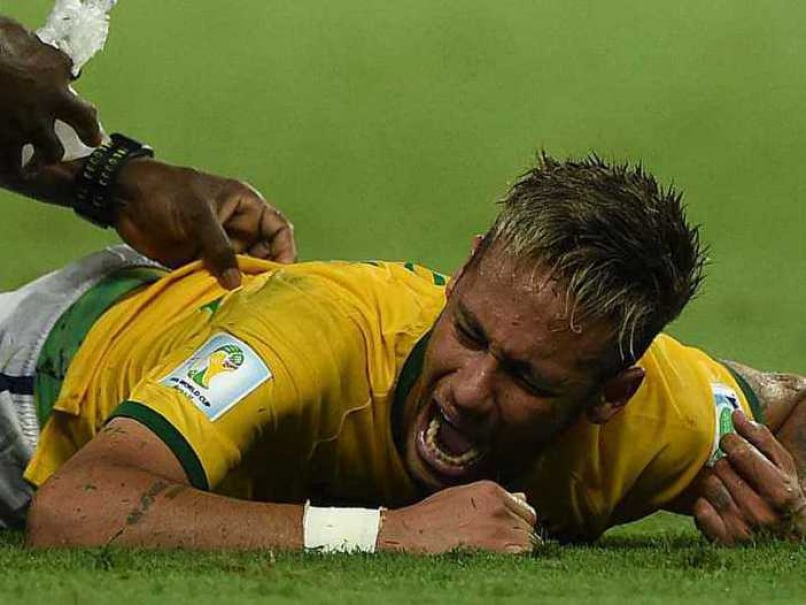 Neymar has been "hunted" throughout the World Cup, Brazil's coach Luiz Felipe Scolari said Friday as his superstar striker was ruled out of the rest of the tournament with a fractured vertebrae. (Complete FIFA World Cup 2014 coverage)

Neymar was carried off in agony after a heavy challenge from Juan Camillo Zuniga towards the end of Brazil's 2-1 quarter-final win over Colombia in Fortaleza.

Hosptal tests showed that the 22-year-old Barcelona striker had a fractured third vertebrae and would not play again in Brazil's campaign for a sixth title.

Brazil play Germany in the semi-final on Tuesday and will also be without captain Thiago Silva who is suspended after getting a second yellow card of the competition.

"I have been saying for three matches that Neymar has been hunted, but all the other countries say it is not true and it is only their players that are hunted," said Scolari.

The coach fumed that Silva had been booked for impeding a clearance from Colombian goalkeeper David Ospina without any injury when Zungia went unpunished.

The Barcelona superstar has been integral to Brazil's World Cup campaign so far, scoring four goals en route to the last four.

Brazil appeared to have had the game won when David Luiz's sensational free-kick doubled his side's advantage midway through the second-half after Silva's early opener.

However, James Rodriguez's penalty 10 minutes from time cut the deficit with his sixth goal in five World Cup games.

"I don't think it was tiredness from the match against Chile because everyone was able to recover.

"So much so that in the first-half if we had finished the chances we had we should have scored the second goal and we would have felt slightly better.

"We then conceded the goal from a situation where we had the ball and lost possession and that caused a momentary lack of calm," he added.

Scolari refused to rule out more changes than just Silva and Neymar for the meeting with the Germans.

"It depends on how people recover in the next two or three days. The last 20 or 25 minutes were much more difficult than expected so I will look at he players and see how they recover to decide."

Match-winner Luiz, meanwhile, revelled in his incredible free-kick that propelled Brazil into the last four for the first time in 12 years.

"Today it was great because I hit the exact point where the ball can go many ways and it is difficult for the goalkeeper," said the Paris Saint-Germain defender.

"We know Germany are a great team, with a great philosophy to play football, a lot of great players, great coach and it will be a great game. This is a World Cup semi-final."

"We have two players that are great players and that have prepared to play just like Thiago and myself.

"We will be missing our captain, but thankfully God blessed our coach with an ability to cap great players."

Comments
Topics mentioned in this article
Brazil Neymar FIFA World Cup 2014 Football
Get the latest updates on ICC Women's Cricket World Cup 2022 and IPL 2022, check out the Schedule , Live Score and IPL Points Table. Like us on Facebook or follow us on Twitter for more sports updates. You can also download the NDTV Cricket app for Android or iOS.