Neymar was stretchered off in the 88th minute of the FIFA World Cup quarterfinal against Colombia and rushed to hospital where the fracture of the third vertebrae was confirmed. 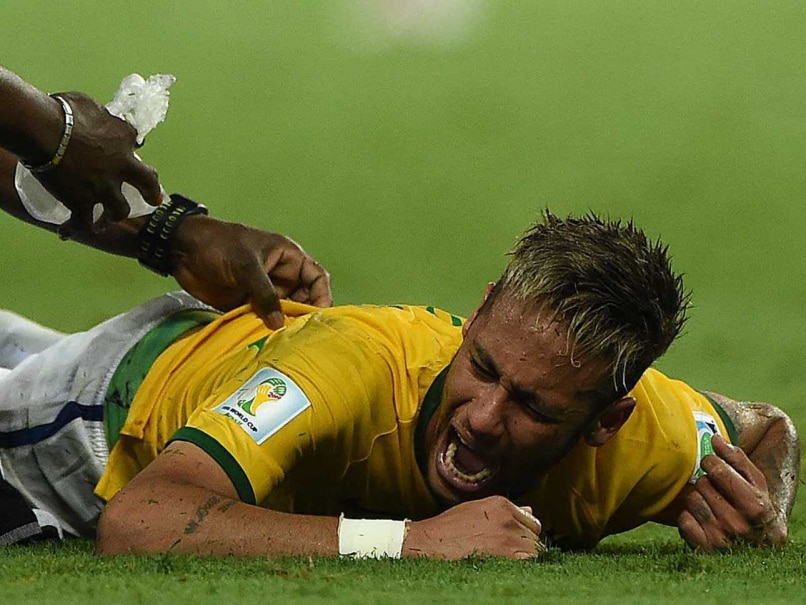 Brazil's forward Neymar (C) lies on the pitch after being injured during the quarter-final football match between Brazil and Colombia.© AFP
Madrid:

Scolari said the whole team panicked after the knee in the back tackle during Brazil's quarterfinal victory over Colombia on Friday. (Pele Hopes Brazil Can Win Without Neymar)

Left back Marcelo was first to reach the striker, who suffered a fractured vertebrae that has ruled him out of the World Cup, after the challenge. (World Cup Dream 'Stolen': Neymar)

Marcelo knelt next to Neymar and asked how he felt, according to Scolari. (No Neymar, no Party for Brazil)

"He replied: 'I can't feel my legs,'" added the coach. Marcelo shouted for the team doctor, but doctors are not allowed onto the pitch. (FIFA Analysing Neymar Injury)

"Marcelo was scared and called the doctor on but the doctor couldn't get on in the confusion. It was a big shock, the image of Neymar being stretchered off to the helicopter, in difficulty, crying," Scolari was quoted as saying.

Team doctor Jose Luiz Runco said that Marcelo's calls for the doctor had caused the panic after the challenge.

"We've lost the one player we didn't want to lose ahead of the semi-finals and the final," Scolari said of the "disastrous" loss.

Neymar was stretchered off in the 88th minute of the game and rushed to hospital where the fracture of the third vertebrae was confirmed.

The 22-year-old Barcelona striker has since taken a few steps but the team doctor Rodrigo Lasmar has said it will take from four to six weeks to recover.

FIFA is investigating the tackle by Zuniga who could face action. The Colombian defender has apologised but insisted he had not intended to hurt Neymar.

Comments
Topics mentioned in this article
FIFA World Cup 2014 Brazil Neymar Football
Get the latest updates on ICC Women's Cricket World Cup 2022 and IPL 2022, check out the Schedule , Live Score and IPL Points Table. Like us on Facebook or follow us on Twitter for more sports updates. You can also download the NDTV Cricket app for Android or iOS.