Netherlands' Jonathan de Guzman suffered a hamstring injury last Monday and has not fully recovered yet, with days to go for the FIFA World Cup. 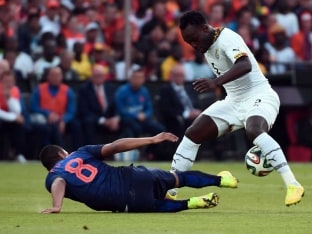 Jonathan De Guzman trained away from the Dutch football squad during the second training session of the Netherlands team in Rio de Janeiro.

Around a thousand Brazilian fans visited the public training at the Flamengo training accommodation in Rio Saturday, some of them even dressed in Orange, the colour of the Dutch national team.

De Guzman suffered a hamstring injury last Monday and has not fully recovered yet. He only did some athletic exercises.

The Netherlands will start their World Cup campaign against reigning champions Spain June 13 in Salvador. Australia and Chile are the other opponents in Group B.