World Cup 2014 pre-tournament favourites Argentina defeated Belgium 1-0 to reach the semifinal for the fourth time. Catch all the highlights from the quarterfinal match.

Higuain's eighth-minute goal helped Argentina secure their fourth World Cup semifinal, where they will meet the winner of the Netherlands vs Costa Rica quarterfinal. Catch the highlights from the match here. (Full schedule | Matchcenter)

23:24 IST:And that's the final whistle.Argentina win 1-0and they will now meet the Netherlands or Costa Rica in the semifinal.

23:23 IST:Belgium made some spectacular efforts in the dying moments, inspired once again by Lukaku, but Argentina did well to hold on.

23:17 IST:Time is fast running out for Belgium, who are playing only their second quarterfinal since 1986 and there will be some very dejected fans by the end of this game. Less than three minutes of normal time left. 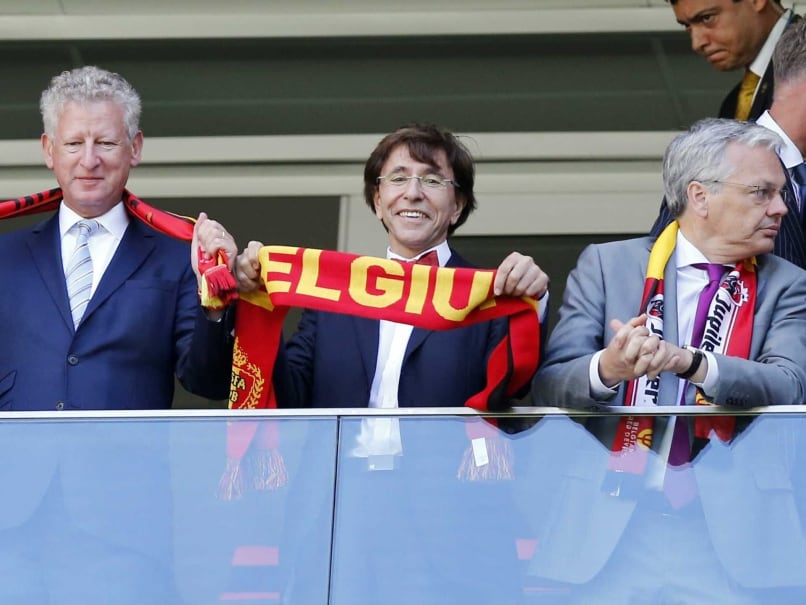 The Belgian Prime Minister was in attendance to show his support for the team.

22:59 IST:With less than 20 minutes left in the game, Belgium are starting to fight back. This is when they have been most dangerous this tournament; remember all of their goals in the 2014 World Cup have come from the 70th minute onward. The dangerous Lukaku, who helped break the deadlock against USA, is out on the field for the Belgians.

22:43 IST:Meanwhile, Higuain continues his assault on the Belgian goal and only sheer bad luck has kept Argentina from stretching their lead.

22:41 IST:Belgian star Eden Hazard has been shown a yellow card for a rough foul.

22:39 IST:Higuain came close to scoring the second goal for Argentina but his wonderful effort was blocked by the Belgian defence. 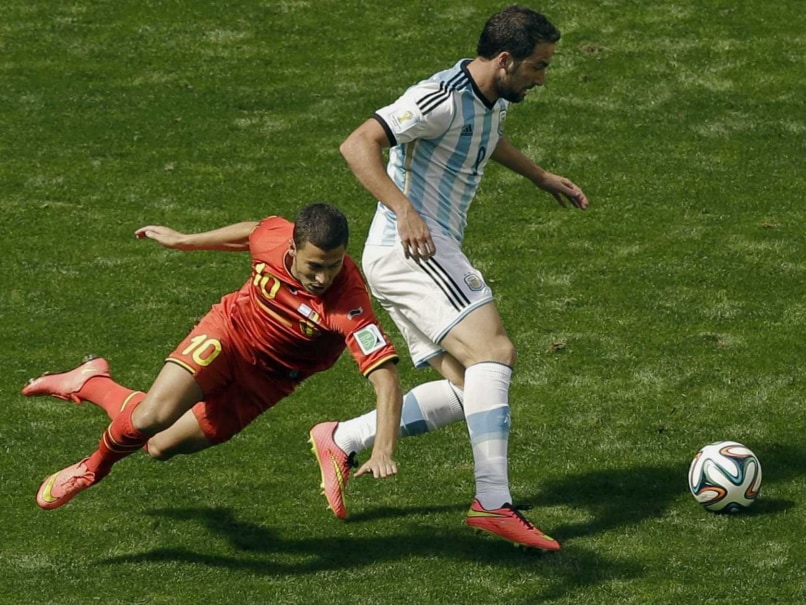 Higuain has been in sensational form for Argentina today.

22:18 IST:At half-time, Argentina lead Belgium 1-0 after Higuan broke his longest scoring drought for Argentina; he hadn't scored in six previous games for them.

22:16 IST:Two minutes stoppage time added to the first half between Argentina and Belgium. 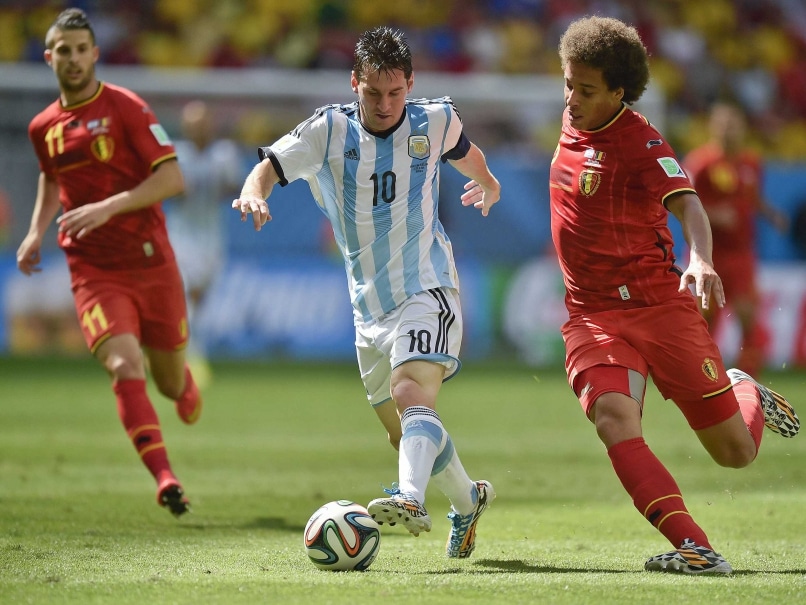 Messi marked by Belgians as he tries to race away with the ball.

22:04 IST:Some worrying moments for Argentina as Di Maria walks off after picking up an injury off the field in the 33rd minute. Moments later, he was seen with an ice-padding on his knee.

22:00 IST:A cooling break on the half-hour mark. Argentina have had 52% of ball possession, compared to Belgium's 48%.

21:54 IST:Argentina and Belgium have won all their games so far in the 2014 World Cup; yet, there will be only one winner today, despite the presence of some heavyweight strikers in both line-ups.

21:46 IST: Lot of pressure on Belgium though; their repeated offensive was stonewalled by Tim Howard and they have conceded an early lead here, against a determined Argentine side.

21:39 IST: GOAL! Gonzalo Higuain's brilliant shot from inside the box beats the Belgian goalie all ends up as Argentina take an early lead here. Score 1-0. 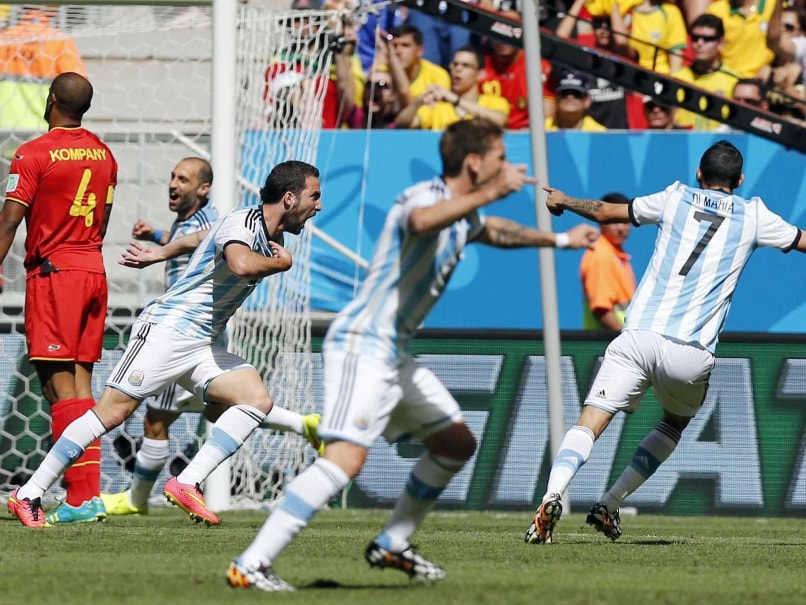 21:32 IST: Game underway; Argentina have been generally slow off the blocks and have had to rely on Messi to deliver them at the end. Can Belgium exploit this vulnerability and strike first?

21:25 IST: Both skippers pledge to stand up against racism as the teams line up for their national anthems.

21:15 IST: Sergio Aguero continues to sit out for Argentina as they take on Belgium in the third quarterfinal of this World Cup.

21:11 IST: The last time Argentina and Belgium clashed in the World Cup, it was Maradona's brace that set victory up for the South Americans. This time, Messi looms large over the Belgians in what will be the sixth international encounter between the two sides. 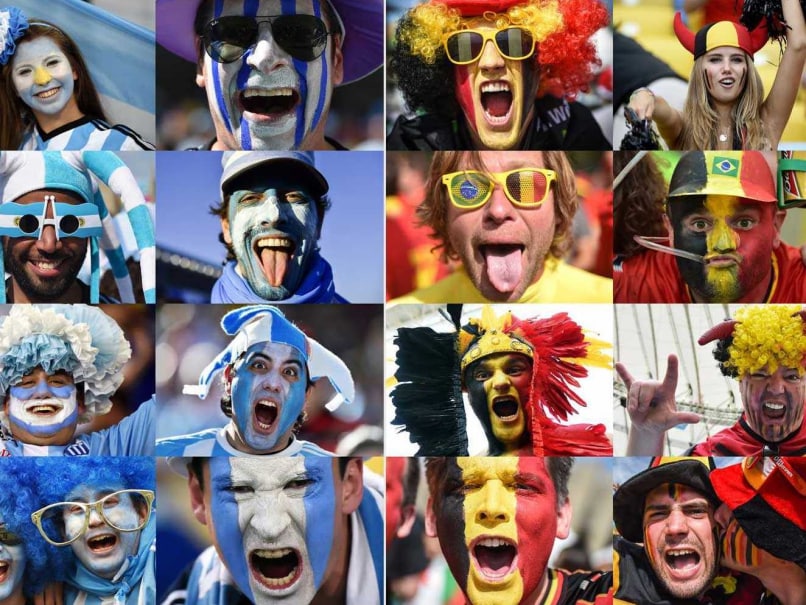 Argentina and Belgium fans are expected to back their teams to the hilt.

Argentina have had a decent outing in Brazil so far with wins against Bosnia-Herzegovina, Nigeria and Iran in the group stage and a win against Switzerland in the Round of 16. The team has been ably led by Lionel Messi while other stars like Angel di Maria and Gonzalo Higuain giving good support. (Also read: In Messi's shadow, Argentina fans find another hero)

The return of Sergio Ageuro to training is a great sign for the team as well.

Coach Alejandro Sabella though has warned his side to not take Belgium lightly. "Now, they have a lot of players who play in the English and Spanish leagues. They're a powerful team. We'll have to be careful when we don't have the ball and try to make things happen when we do," he said. And he may be right. (Read more here)

Belgians are a formidable unit and the young stars would be hungry for more glory. The last time the team qualified for the World Cup was in 2002 - the current squad were a disparate gaggle of schoolboys poised unknowingly on the brink of global stardom. They are men now - men raring to fight. (Can Messi tame 'underdogs' Belgium?)

The likes of captain Vincent Kompany and forward Eden Hazard can be menacing for Argentina who are blamed to be overdependent on Messi anyway. (Also read: Maradona says don't blame Messi if Argentina lose)

Comments
Topics mentioned in this article
Argentina Belgium FIFA World Cup 2014 Football
Get the latest updates on ICC Women's Cricket World Cup 2022 and IPL 2022, check out the Schedule , Live Score and IPL Points Table. Like us on Facebook or follow us on Twitter for more sports updates. You can also download the NDTV Cricket app for Android or iOS.