Javier Mascherano's last-ditch tackle to prevent Arjen Robben from putting the Netherlands into the FIFA World Cup final at Argentina's expense in the semi-final has already become an internet sensation. 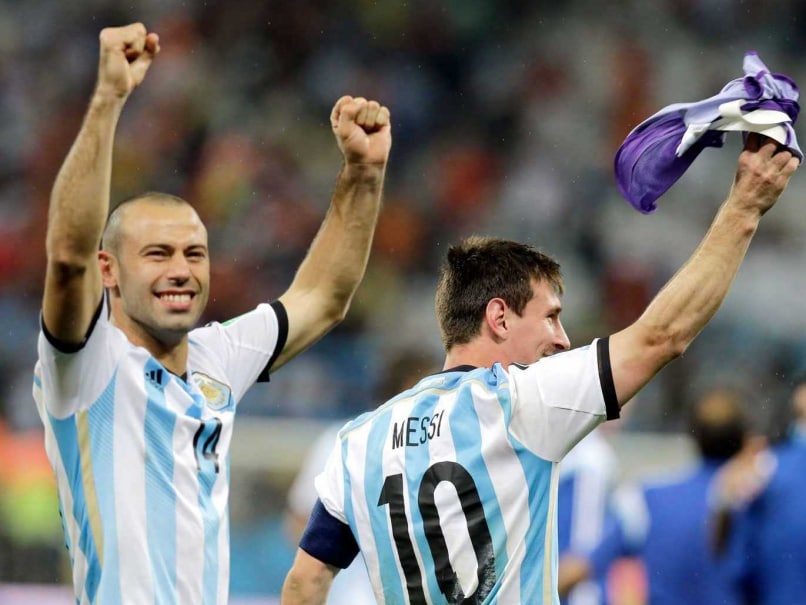 If Messi leads by his example, Mascherano is the vocal leader.© AP
Rio de Janeiro:

It says everything of Argentina's World Cup that should they go on to beat Germany in Sunday's final in Rio, many expect Javier Mascherano, not Lionel Messi to be crowned the tournament's best player.

Mascherano's last-ditch tackle to prevent Arjen Robben from putting the Netherlands into the final at Argentina's expense in the semi-final has already become an internet sensation. (Germany Plan to Wreck Messi's Party)

The "little chief" has appeared in mocked up photographs as Che Guevara and historic Argentine general Jose San Martin amongst others. (Ready to Make History: Loew)

"I am not Rambo or San Martin or anything like that. I take it with humour, but it embarrasses me," Mascherano told Argentine sports daily Ole. (Germany Expect to Edge Past Argentina)

"It is not false modesty because that is worse than arrogance. What happens is when people praise you too much they begin to have expectations that perhaps you cannot match." (Will Messi Triumph vs Germany?)

Mascherano has more than matched expectations so far, patrolling his backline to ensure Argentina have kept four clean sheets in six games in Brazil, including in all three games in the knockout phase.

If Messi leads by his example, Mascherano is the vocal leader. The latest example of that coming before the penalty shootout against the Dutch when he could be seen telling goalkeeper Sergio Romero, "tonight you become a hero in Argentina." (Germany Can be Beaten: Maradona)

Romero went onto make the two crucial saves in the shootout. And German midfielder Bastian Schweinsteiger became the latest admirer of the character with which Mascherano leads his men.

"They have players like Messi, (Angel) Di Maria, (Sergio) Aguero, and then there's Mascherano, who's like the leader of a pack of wolves," he said on Saturday.

"I remember his tackle on Arjen Robben against Holland. That shows the kind of attitude they have as a team and that he has for his country."

A dedication for his country that goes way beyond the norm. Mascherano had already returned to action after suffering a concussion early in the match when he suffered another less common injury in making his saving challenge on Robben.

Mascherano's form is all the more amazing given he hasn't played his preferred role at club level for four years since signing for Barcelona.

Converted into a central defender by Pep Guardiola, he has experienced highs and lows at Barca with his lack of height and pace often exploited in the last line of defence.

Yet, so beloved is he within the club that last month he was rewarded with a new contract until 2018.

"I would never, ever sell him and I wouldn't swap him for anyone," Guardiola said before his exit from the club in 2012.

That change of position has also had its benefits for Argentina. Playing at Barca has greatly improved Mascherano's distribution and he has played more passes at a higher success rate than any other player at the World Cup.

This World Cup has seen the 30-year-old's reputation as one of the best holding midfielders in the world rightly restored.

However, he is still hungry for more come Sunday at the Maracana. "In this tournament, when the team works well the individuals grow. You see that the team supports the names within in.

"We had the luck that Romero saved the penalties, that Angel scored in the 120th minute (against Switzerland) and history is like this.

"Obviously I am happy with my individual performance, I am not going to lie, but I am one of those who thinks you have to make do the analysis once it is finished and it is not finished.

"Tomorrow (Sunday) we have a chance that comes around once in a lifetime."

Comments
Topics mentioned in this article
FIFA World Cup 2014 Javier Mascherano Argentina Football
Get the latest updates on ICC Women's Cricket World Cup 2022 and IPL 2022, check out the Schedule , Live Score and IPL Points Table. Like us on Facebook or follow us on Twitter for more sports updates. You can also download the NDTV Cricket app for Android or iOS.