Javier Hernandez has an impressive 35 goals in 61 games for his country, but has not scored since last summer for Mexico and started the 1-0 defeat to Portugal at the home of the New England Patriots on the bench. 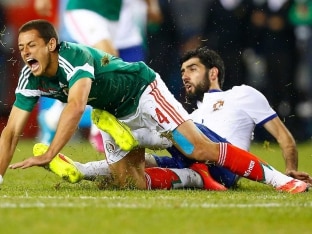 Javier Hernandez has not scored since last summer for Mexico © AFP

Mexico head to the World Cup and a glamor date with hosts Brazil fresh off two defeats, no goals and star striker Javier Hernandez out of the side and out of form.

But coach Miguel Herrera believes their quarter-final goal is a realistic one and they had the better of Friday's friendly in the United States against Portugal, before conceding in injury time.

Portugal keeper Eduardo made several crucial saves -- he had an "amazing" game, said Herrera -- and "El Tri" should have been out of sight by the time Portugal defender Bruno Alves headed home.

"The team demonstrated they can do big things, but we need to capitalize on our attacks and we need to concentrate on our finishing," said Herrera, a popular figure with the Mexican press.

"We dominated and played very well."

Manchester United forward Hernandez, linked with a big-money move away from Old Trafford after spending most of the season warming the bench, poses the biggest headache for Herrera and Mexico.

The 26-year-old, nickname "Chicharito," has an impressive 35 goals in 61 games for his country, but has not scored since last summer for Mexico and started the 1-0 defeat to Portugal at the home of the New England Patriots on the bench.

Herrera said the side that started would form the "basis" of his team for their World Cup opener against Cameroon on June 13. Mexico play Brazil four days later, followed by Croatia.

But he reserved special praise for Hernandez, suggesting he will pick the poacher despite his rock-bottom confidence and poor form for club and country.

"He came on, did well and created three chances," said the colorful Herrera, who has publicly urged Hernandez to leave United in the search for regular action.

Friday's defeat, Mexico's last warm-up game before the Cameroon clash, followed a 1-0 loss to Bosnia that also saw the Mexicans enjoy plenty of the ball, but with little in the way of end product.

Mexico nearly were not at the World Cup at all and only qualified via a playoff against New Zealand, having plowed their way through several coaches in a turbulent campaign.

"We're arriving under a lot less pressure than on past occasions, when people expected great things from the team," he said.

"The general feeling is that we don't have anything to lose, and that's how we're approaching it. I think that we'll pleasantly surprise a lot of people."

The 26-year-old Espanyol player, who is expected to start against Cameroon, is relishing coming up against Neymar and the rest of the Brazilians.

"Brazil will have thousands of spectators supporting them. Are we going to let that overwhelm us? Not at all," he told FIFA.com.

"We've beaten them before and we're confident that we can do it again. You never know what football will throw up, and it's up to us to deal with whatever comes our way."