The Blue Samurai have established themselves as the leading force on the Asian continent largely thanks to the technical quality of their nimble midfield, while the Ivorians' rely on the power and driving runs of African Player of the Year Yaya Toure and exciting young full-back Serge Aurier. 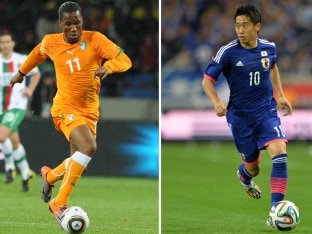 Japan's technicians must try to outfox a powerful Ivory Coast as the Asian and African powerhouses meet in a clash of styles here Saturday.

The Blue Samurai have established themselves as the leading force on the Asian continent largely thanks to the technical quality of their nimble midfield, while the Ivorians' rely on the power and driving runs of African Player of the Year Yaya Toure and exciting young full-back Serge Aurier.

Whether it is Japan's guile or the Elephants' physical force, whoever comes out on top in the Pernambuco Arena on Brazil's north-east coast will put themselves in a fine position from which to go on and qualify for the last 16.

A group that also contains Greece and a Colombia side deprived of the injured Radamel Falcao could be one of the most open of this World Cup, but Ivory Coast coach Sabri Lamouchi is hopeful his side can progress.

"Our ambition is to go beyond the first phase as it is something the Ivory Coast have never managed before," said the Frenchman, who is the youngest coach at the finals at the age of 42.

The Elephants' Golden Generation, led by veteran striker Didier Drogba, have bowed out at the group stage in each of the last two World Cups and Lamouchi knows the importance of getting a positive result against Japan.

"In the last two years I have brought my ideas, my methods. I can assure you we have worked very well," he added.

"We have brought in younger players because we also need to prepare the future. It is true that we have great players, international class players like Drogba, Yaya Toure and Gervinho, but this generation has still not won anything and we need to find out why that is."

In 2006 and 2010, they could point to being handed extremely difficult draws, first being grouped with Argentina and the Netherlands and then with both Brazil and Portugal.

This time the draw gives them reason to be more optimistic, and they may be better prepared to deal with the tropical climate in Recife than the Japanese.

The Asian champions will look to the creative spark of Manchester United's Shinji Kagawa and Keisuke Honda of AC Milan, but Italian coach Alberto Zaccheroni will know his defence could struggle against the quality of Drogba and Swansea City's Wilfried Bony.

But he is hopeful that his team will be mentally ready for their first truly competitive game since securing World Cup qualification a year ago.

"I want us to be really well prepared mentally for this match. We need to make sure the players are not too nervous when they step out onto the field, but we cannot be too relaxed either," said the 61-year-old former AC Milan coach.

"We have a squad with an average age of about 27. There is a good balance and I am sure we will start this game with the right approach."

Japan are expecting midfielder and captain Makoto Hasebe to feature after he said he was "ready to go" following a knee injury, while the Ivorians will hope Yaya Toure shakes off a hamstring problem in time to feature.