Italy would go to the 2014 FIFA World Cup as one of the toughest oppositions for other teams but their recent form is a cause of worry for coach Cesare Prandelli.

Italy coach Cesare Prandelli might not admit it but in Brazil the pressure is on to finally end the pain of a disastrous 2010 World Cup that plunged Italy into despair and sent the Azzurri into redemption mode. 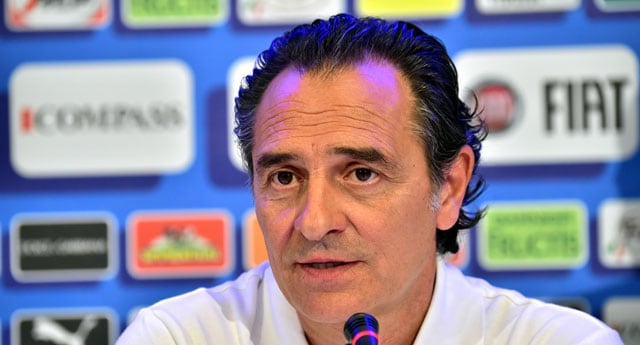 Yet negotiating safe passage through a "tough" Group D in Brazil, admits Prandelli, remains the priority ahead of bigger tests that could finally heal Italy's World Cup wounds for good.

"We know we're in a particularly tough group, our first objective is to qualify, and then we'll see," Prandelli said.

"Only once we're into the second round can we start to harbour any real ambition."

Although the mood has been more upbeat of late, with Prandelli recently declaring that his squad has been "designed with getting to the final in mind", Italy would be forgiven for enduring some jitters in the group phase.

In December 2009 a collective sigh of relief was heard when Italy were drawn with Paraguay, New Zealand and Slovakia for the 2010 World Cup in South Africa.

Barely three games in, sighs turned to cries and optimism to despair as Marcello Lippi's men finished bottom of their group following consecutive draws with Paraguay and New Zealand and a crushing 3-2 defeat to Slovakia.

After Brazil (1966) and France (2002), Italy became the third World Cup holders to fail to get past the first round in the next edition. Worse, Italy failed to win a single game at the tournament for the first time.

Italy have since made amends: a surprise Euro 2012 final under Prandelli (and an eventual 4-0 humbling by Spain), followed by a jittery but overall positive qualifying campaign for Brazil 2014.

But despite the quiet optimism -- midfielder Daniele De Rossi said Sunday Italy were "among several teams" with the chance of making it to the final -- Italy have it all to prove.

Italy have slumped to ninth in FIFA's rankings and in Brazil England, Costa Rica and Uruguay now lie in place of relative minnows Paraguay, New Zealand and Slovakia.

For their group opener in the steamy Amazonian venue of Manaus, England v Italy already has the makings of a classic. Prandelli will be hoping his men don't freeze, as they did against Paraguay four years ago when they required a De Rossi leveller in the second half after conceding to a 38th minute header by Wigan defender Antolin Alcaraz.

Prandelli does not want a repeat showing: "It will be important to take three points from our first game and in the process beat a strong team."

Italy would normally be expected to account for Costa Rica in Recife's Arena Pernambuco a week later. They will certainly hope the ghost of their second game at the 2010 edition stays well away.

Italy are not immune to World Cup upsets, from defeat to North Korea in 1966, going 1-0 down to Haiti in 1974 --before which legendary 'keeper Dino Zoff had gone a record 1143 minutes without conceding a goal -- losing to Ireland in 1994 and then South Korea in 2002.

But few believed a second successive draw was on the cards -- until New Zealand battled to a 1-1 result to upset the defending champions.

By then, goalkeeper Gianluigi Buffon, suffering a back injury during the Paraguay game, and midfielder Andrea Pirlo (calf), who missed the opening two games, were on Italy's casualty list before a must-win game against Slovakia.

Stunned by a first-half brace from Robert Vittek, Pirlo came off the bench in the second half but despite Antonio Di Natale reducing arrears on 81 minutes, a Kamil Kopunek strike extended Slovakia's lead to 3-1. Fabio Quagliarella's 90th minute strike was scant consolation as the champions crashed out.

If they avoid such a scenario in Brazil, Italy could meet Colombia or Ivory Coast in the second round. A quarter-final clash against hosts Brazil or defending champions Spain could then be on the cards.

Four years on from South Africa, Buffon believes Italy have learned their lesson: "It will be hard to beat everyone, but other teams will have to work hard if they want to beat us, we won't be giving anything away for free. "We are Italy. Everyone should fear us."