Illness and injury forced Italy coach Cesare Prandelli into an experimental 4-1-4-1 formation which failed to work against a determined Luxembourg side. 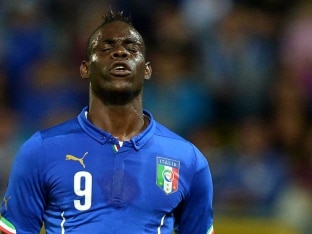 Italy's Mario Balotelli reacts during a friendly match against Luxembourg.

Italy were stunned by a late goal from minnows Luxembourg as they were forced to settle for a 1-1 draw in Perugia in their final friendly match before heading to the World Cup in Brazil.

However, a series of defensive lapses and wasted opportunities allowed Maxime Chanot to seal an impressive result for the team who sit 120th in the FIFA rankings in the 85th minute of the game.

As was to be expected, Italy started the match on the front foot and dominated possession before Juventus midfielder Marchisio's header beat visiting goalkeeper Anthony Moris.

Moments later, Candreva played Balotelli in on goal, but a last-ditch challenge from Mario Mutsch prevented the hosts from doubling their lead.

Balotelli and Verratti both saw shots go off target, while Candreva also fired high and wide from the edge of the penalty area.

Then, as the first half came to a close, Pirlo forced Moris into an excellent save from a free-kick just outside the penalty area.

Ten minutes into the second period, Antonio Cassano, earning his 36th cap for Italy, replaced the impressive Verratti and made an immediate impact on the game.

The Parma striker's through ball split the Luxembourg defence and found Balotelli, who evaded the challenge of two defenders but saw his shot come back off the bar.

Then, seconds later, a Balotelli cross was met by the head of Candreva, who himself could only rattle the woodwork.

Late substitutes Lorenzo Insigne and Alessio Cerci added some width for the Azzurri in the final 15 minutes, with Cerci in particular looking lively, testing Moris with a low shot from the right edge of the penalty box.

But just as the game looked to be heading to an expected end, Chanot lost his marker Alberto Aquilani to head home a Mutsch corner, leaving the home crowd stunned.

Prandelli's men could not find a winner, and the four-time world champions now head to Brazil with a lot of soul-searching to do ahead of their first Group D match against England in Manaus on June 15.