Sunday's FIFA World Cup final features the widely regarded best stopper in the world in Germany's Manuel Neuer, whose sweeper-keeper ability to rush from his goal could lead to a revolution in how the position is played. 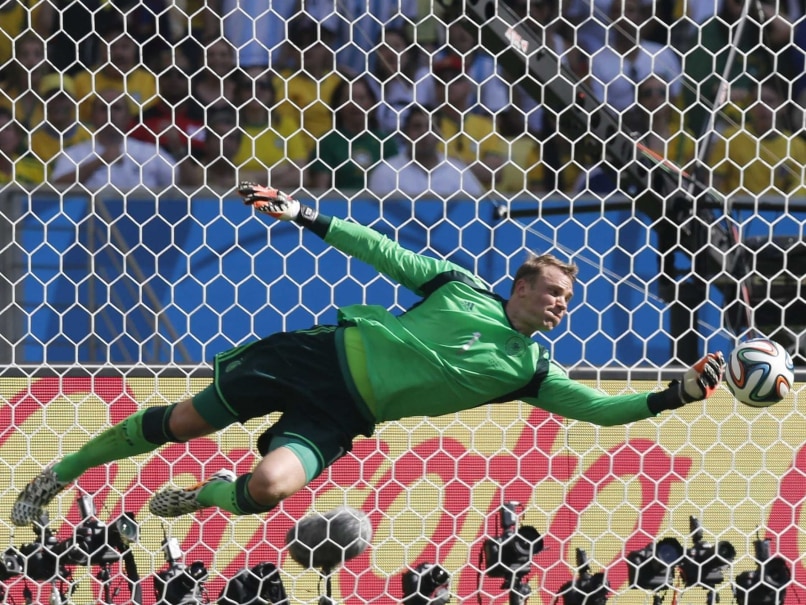 Neuer has made some sensational saves for Germany in the FIFA World Cup.© AP
Rio de Janeiro:

Despite being a tournament labelled as the return of attack-minded football after the caution shown in South Africa four years ago, Brazil 2014 has been a platform for the world's best goalkeepers to shine.

Sunday's final features the widely regarded best stopper in the world in Germany's Manuel Neuer, whose sweeper-keeper ability to rush from his goal could lead to a revolution in how the position is played.

However, even those less widely recognised at club level have shone in the bright lights of Brazil over the past five weeks. (Vital Stats)

Argentina's Sergio Romero made just one league start for Monaco last season, but became a national hero when he saved penalties from Ron Vlaar and Wesley Sneijder to send his side into their first World Cup final in 24 years. (Full FIFA Coverage)

With more teams committed to attack the wide-open nature of the tournament certainly gave those in the last line of defence more chance to shine.

However, they have also been aided by a reliable ball in the Brazuca which hasn't dipped and swerved to leave 'keepers bewildered like the Jabulani did four years ago.

North American federation CONCACAF enjoyed their best ever showing at a final with three teams reaching the last 16 in large part thanks to their goalkeepers.

Mexico's Guillermo Ochoa somehow kept Brazil at bay in a 0-0 draw in Fortaleza and almost certainly earned himself a lucrative contract in the process.

Ochoa is a free agent having left French club Ajaccio and has been linked with a move to Spanish champions Atletico Madrid amongst others.

Another man on Atletico's radar is Costa Rica's Keylor Navas who is the only player along with Lionel Messi to have won three man-of-the-match awards in Brazil.

Navas conceded just once from open play in 510 minutes and also guided his side into the last eight for the first time in their history with a stunning penalty save from former Levante teammate Theofanis Gekas to eliminate Greece.

The single most impressive goalkeeping display of all, though, may have come from America's Tim Howard against Belgium in the last 16.

Howard made 16 saves, a record for any goalkeeper in a World Cup match stretching back to 1966.

The Everton goalkeeper became an overnight sensation back in the States with the hashtag "ThingsTimHowardCouldSave" becoming a tending topic on social media site Twitter, whilst he also received a personal call of thanks from US President Barack Obama. (Germany's Haunting Emptiness in Goal)

Even goalkeepers that played just one minute of action were decisive as the Netherlands' Tim Krul became one of the most important substitutes of the tournament when he was brought on in the last minute of extra time for side's penalty shootout with Costa Rica. (Tim Howard, USA's New Captain America)

Despite having a far from stellar penalty saving record with club side Newcastle United, Krul made two fine stops to end the Central Americans' fairytale ride to the last eight.

Just as every keeper can be a hero, though, they can also be a villain as Spanish captain Iker Casillas found to his cost, making a series of blunders as the defending champions crashed out in the first round.

It was a similar story for Russia's Ivan Akinfeev as having already dropped a clanger to allow South Korea to open the scoring in his side's first match, he was at fault again when Fabio Capello's men seemed on course for the last 16 against Algeria.

Capello claimed Akinfeev had been blinded by a laser pen as he got caught under Yacine Brahimi's cross allowing Islam Slimani to equalise.

Unfortunately for the 2018 hosts that was to be the only bright light on Russia's campaign as they were sent packing with just two points to their name.

Comments
Topics mentioned in this article
FIFA World Cup 2014 Germany Argentina Manuel Neuer Tim Howard Sergio Romero Football
Get the latest updates on ICC Women's Cricket World Cup 2022 and IPL 2022, check out the Schedule , Live Score and IPL Points Table. Like us on Facebook or follow us on Twitter for more sports updates. You can also download the NDTV Cricket app for Android or iOS.