Right-back Phillip Lahm (ankle) and Manuel Neuer (shoulder) have both been unable to play since picking up injuries playing for Bayern Munich in the German Cup final three weeks ago and are still rated as 'doubtful' for the match in Mainz. 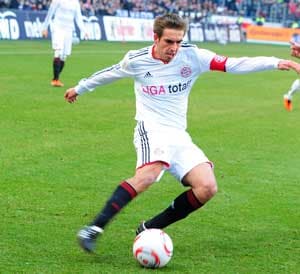 Germany host Armenia on Friday in their final World Cup warm-up match before flying to Brazil with question marks over the fitness of captain Philipp Lahm and goalkeeper Manuel Neuer.

Right-back Lahm (ankle) and Neuer (shoulder) have both been unable to play since picking up injuries playing for Bayern Munich in the German Cup final three weeks ago and are still rated as 'doubtful' for the match in Mainz.

Germany's vice-captain Bastian Schweinsteiger is expected to be fit despite also receiving intensive treatment for tendinitis of the knee.

Team manager Oliver Bierhoff has said the trio should all be fit for Germany's opening World Cup match against Portugal in Salvador on June 16 in Group G.

After Germany were held to a 2-2 draw by Cameroon last Sunday in Moenchengladbach, head coach Joachim Loew wants improvements in their passing game.

Loew admitted his chief play-maker Mesut Ozil did not have "one of his best days" against Cameroon and pressure is on the Arsenal star to perform.

Ozil, who joined Arsenal from Real Madrid at the start of the season, has suffered a drop in form recently having suffered a hamstring injury.

Ex-Germany captain Michael Ballack says Ozil "looks lost" on occasion and is concerned whether the 25-year-old will recapture his form before the World Cup.

"In the last few months, since his move to Arsenal, he has not been the same player, in terms of his confidence, that we used to see in the national team," Ballack told British tabloid the Daily Mirror.

"It's difficult to say where his head is going to be at the World Cup."

Loew has options to replace Ozil in Germany's midfield, including Borussia Dortmund's Marco Reus, but has said he will give the Gunners' star time.

"I was worried about him (Ozil) when he was injured, but not about his performances, because I know he can do incredible things," said Loew.

"We need to tease it out of him. He is the sort of player who can decide games."

Germany need a confidence-boosting win before flying to their World Cup base in Porto Seguro, via Salvador, from Frankfurt on Saturday.

Ballack has said senior squad members -- players like Thomas Mueller and Schweinsteiger -- must show some leadership, especially with Lahm and Neuer missing.

"To win something, it is really important to have personalities on the pitch. That is the only aspect where I see a little bit of weakness in this German team," said Ballack.

Germany, ranked second in the world, have posted big wins over the Armenians, who are ranked 33rd, in their two previous meetings -- a 5-1 win in 1996 during a World Cup qualifier was followed by a 4-0 win in 1997.

Coach Loew will be looking for his 71st win in his 105th international match in charge.