The German Football Federation said that Marco Reus suffered a partial ligament tear in his left ankle in the match on Friday and will miss six to seven weeks before he can resume training again. 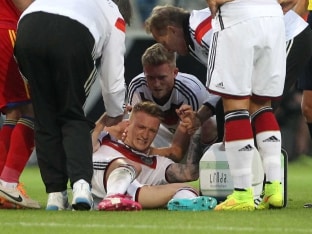 Germany attacking midfielder Marco Reus was ruled out of the World Cup on Saturday with an ankle injury sustained in a 6-1 friendly win over Armenia.

The German Football Federation said that Reus suffered a partial ligament tear in his left ankle in the match on Friday and will miss six to seven weeks before he can resume training again.

"For him and for us this is extremely regrettable," Germany coach Joachim Loew said. "Marco was in excellent form; he made an outstanding impression in the training camp and in both (friendly) matches against Cameroon and Armenia. He exuded enthusiasm for the game. He played a central role in our planning for Brazil."

The 25-year-old Reus was one of the few German players to have impressed consistently coming into the World Cup.

"A dream is ended from one second to the other. But I have to look forward now, approach my recovery professionally, because then I have to go again. I'll come back even stronger than before," Reus was quoted as saying on the website of his club, Borussia Dortmund.

"I send my best wishes to the team (and hope) that they can also achieve our aim without me."

Shkodran Mustafi was called up as a late replacement for the Dortmund player. The 22-year-old Sampdoria defender was part of Germany's 30-man preliminary squad and took part in the training camp in northern Italy

"It's not about replacing Marco Reus directly," Loew said. "We have a lot of quality for the position behind the forward. Here we have in Lukas Podolski, Andre Schuerrle, Mario Goetze, Thomas Mueller, Mesut Ozil, Julian Draxler and Toni Kroos enough options. So we decided for another option in defense."

Mustafi told the dpa news agency that Loew had phoned him as he was on his way home.

"I'm very sorry for Marco, but of course I'm happy that I can be there," Mustafi said.