Technological innovation can be as big a boon for sports as it can be for cheering fans. And the FIFA World Cup this year is all set to improve the football experience like never before. 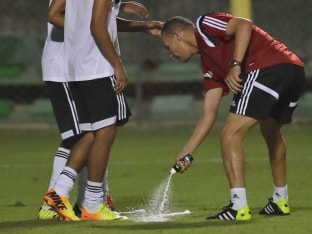 The 2014 World Cup will represent the first time that goal-line technology has been used at football's showpiece event, but technological advances will also shape the tournament in other ways.

Here, AFP Sports identifies five new technologies that will aid players, officials and fans during the competition, which starts on Thursday:

In a bid to prevent teams from illegally gaining ground at free-kicks, referees at the tournament will be armed with small canisters of vanishing foam. The biodegradable white substance will be sprayed on the pitch to mark where free-kicks should be taken from and the 10-yard distance that the opposition's defensive wall must observe. Known as Aero Comex Futline, the substance dissolves within a minute. "Players respect it," says Australian referee Ben Williams. "It's a great innovation and I'm looking forward to using it."

The German Football Federation (DFB) has installed a specially designed 'Twitterwall' at the Germany team's hotel near Porto Seguro in the eastern Brazilian state of Bahia. Using the hashtag #aneurerseite (#onyourside), supporters can send picture messages encouraging the team that will be displayed on the wall for the players to see. A similar idea was used at Frankfurt airport before the squad flew out to Brazil.

Uruguay's players have been keeping in touch with each other prior to the tournament by using the WhatsApp instant messaging service on their smartphones. Striker Edinson Cavani revealed that he and his team-mates used the app to share their thoughts on the World Cup draw, which saw the South American champions paired with England, Italy and Costa Rica. "It was a bit like 'Oh, Italy! Oh, England!'" Cavani told Britain's FourFourTwo magazine. "That messaging group is great for keeping us in contact because we're playing all around the world and we can support each other. In that moment, it went crazy!"

The 2014 World Cup will be the first tournament to be partly captured in Ultra High Definition (UHD), which boasts a resolution approximately four times higher than conventional High Definition television and requires a satellite network capable of handling 100 megabits of data per second. The tournament is seen as a trial run for the technology, which is not yet widely available.

England's players have each been equipped with iPads containing personalised information about their group-stage opponents. The Football Association has designed a scouting app that allows Wayne Rooney, Steven Gerrard and their team-mates to access personal data and video footage of the specific opponents they will come up against at the tournament. England have also been using heat chambers and wearing extra layers of clothing in training in a bid to replicate the humid conditions in the Amazonian city of Manaus, where they will play Italy on Saturday. "We've made progress," said midfielder James Milner. "We haven't left any stone unturned, and our preparation has been very good."