Argentina face Germany in the FIFA World Cup 2014 title clash. Fans have enormous expectations from captain Lionel Messi who has marshaled his men well so far. 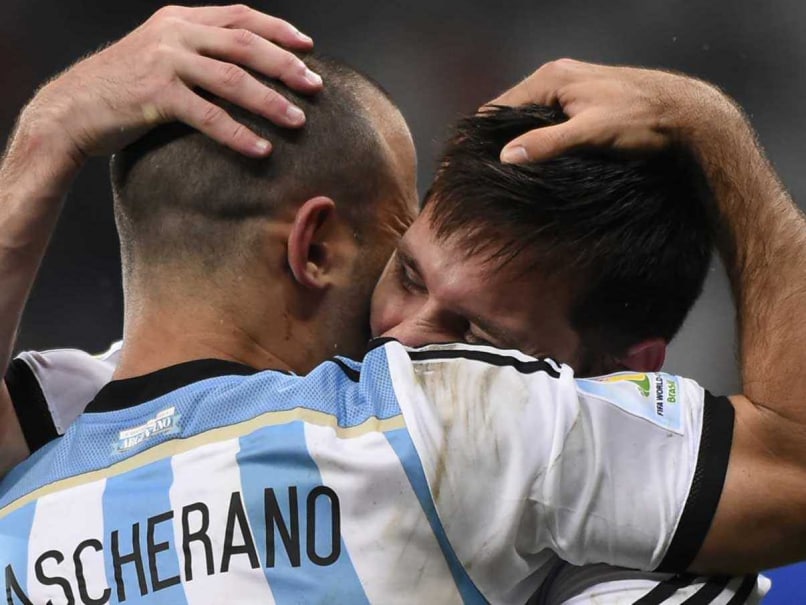 Everyone in Rosario has a tale to tell about Lionel Messi, the Argentinian city's most famous son who rivals Pope Francis as a national icon. (Five reasons why Messi stands out)

Messi's link to the city has made the people of the port city doubly nervous about Sunday's World Cup final when their country take on Germany in Rio de Janeiro. The Barcelona striker has only scored four goals in the tournament so far. (Full preview of FIFA World Cup final)

"I hope that Messi becomes his old self again Sunday and hits a goal," said Monica Domina who once taught the football genius. (Related: Pope loves all, will stay neutral during FIFA World Cup final)

Domina admitted she knows little about football, but she is still "anxious" about Sunday's match. (Also read: No pressure on us, says Germany's Bastian Schweinsteiger)

Taxi driver Daniel Rodriguez is able to point out Messi's former home in a working class district away from central Rosario. "Everyone else is second class," he said.

"My grandson went to the same school as Messi and still remembers the little boy with his ball who everyone chased and noone could catch," said 80-year-old Elsa Uhrig.

Messi is not the only Argentina player from Rosario. Javier Mascherano and Maxi Rodriguez also played for Newell's Old Boys. While Angel di Maria, Ezequiel Garay and Ezequiel Lavezzi were at Rosario Central.

But the city on the Parana river clings to the superstar football, four time winner of the world player of the year, even though he left the city at the age of 11. His father lost his job as a steelworker and Barcelona paid for the $900 a month cost for growth hormones to treat his rare condition. (Also read: Argentina coach to step down after final, says agent)

Tens of thousands of people descended on the central square to chant the names of the players after Argentina beat the Netherlands on penalties in Wednesday's semi-final. Thousands have gone to Rio de Janeiro to be near the team as they play on Sunday, few have tickets to get into the Maracana Stadium.

The World Cup is becoming as important to Argentina as the election of Pope Francis in 2012. For many fans an Argentina win will be a miracle after so many disappointments against Germany.

At the Argentinian training camp in Brazil, the 'hinchas' supporters sometimes dress up as the pope, complete with a Francis mask. Some carry photos showing the former Archbishop of Buenos Aires next to Messi.

In the capital, a plastic blowup version of the Christ The Redeemer statue that dominates Rio is put up for each World Cup match in the Obelisco, the district that is the traditional venue for football celebrations.

"We cannot complain" in having the pope and one of the world's best known sporting stars, said Buenos Aires inhabitant Elida Troneberger. "There is no doubt, they represent us well."

Messi, a fervent Roman Catholic, and the pope, a big football fan, have both risen to international recognition from humble beginnings. Pope Francis, born Jorge Bergoglio, is the son of a Buenos Aires train driver and a card-carrying member of San Lorenzo, one of Argentina's best known clubs.

The pontiff caused a minor sensation when, two months after his election, he put up three fingers in responding to another San Lorenzo fan who was in St Peter's Square. A few days before the team had beaten rival Boca Juniors 3-0.

After scoring goals, Messi often points a finger to the sky as though he is acting on divine intervention.

If Messi scores in an Argentinian victory on Sunday he will almost certainly be considered a saint in his home country.

Comments
Topics mentioned in this article
Argentina Germany FIFA World Cup 2014 Lionel Messi Football
Get the latest updates on ICC Women's Cricket World Cup 2022 and IPL 2022, check out the Schedule , Live Score and IPL Points Table. Like us on Facebook or follow us on Twitter for more sports updates. You can also download the NDTV Cricket app for Android or iOS.